The pure, unadulterated, sweet taste of fall: raw, unfiltered apple cider. We couldn't think of a better way to spend an autumn day on the land with friends, pressing fresh apple cider in community. 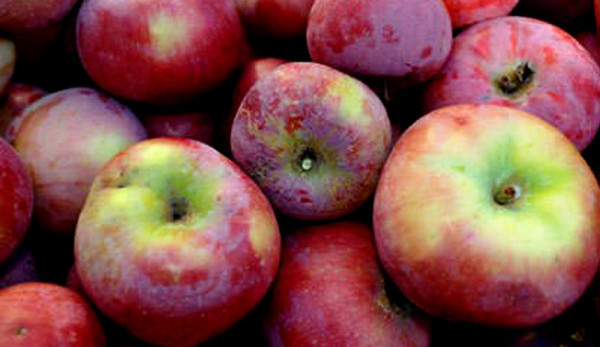 The pure, unadulterated, sweet taste of fall: raw, unfiltered apple cider. We couldn’t think of a better way to spend an autumn day on the land with friends, pressing fresh apple cider in community. Below is a photo essay of our recent afternoon of apple cider making with several families in Monroe, Wisconsin. Not surprisingly, many hands make fastâ€”and funâ€”work of the task, especially since we had a crew of enthusiastic kids and it was a pleasant, sunny day in the low 70s.

Picking the two apple trees we had at our disposal was our first step. Teamwork and enthusiasm resulted in about three bushels of apples picked in less than an hour. We lucked out with a combination of both slightly tart and sweet apples from the two trees, neither of which had been sprayed with any pesticides.

We had two step ladders at hand, one apple picker and even worked from the bed of a pick-up truck backed up to the trees.

Ripe apple abundance: We made sure to leave any diseased or insect-infested apples alone.

We set up two tables: one to cut, pare and crush the apple sections in an apple grinder and another table that held the apple-cider press.

Because we took turns with various steps of the cider-making process, no one got tiredâ€”or carelessâ€”while cutting up the apples.

There was plenty of cranking involved. Mashing the apples in the grinder appealed to all involved, young and old alike.

We used a spoon to scoop out mashed apples from the grinder. We only lost one spoon to the machine. (It was inserted at the same time the masher was spinning.)

At some point, the apple grinder presented a new challenge: See how fast you can spin the handle.

Getting the apples mashed up is essential to pressing the cider. Several large metal bowls were shuttled between the grinding and pressing tables. Given the number of kids involved, a pleasant competition ensued between tables as to who could move the quickest.

We placed the mashed apples into the apple-cider press in batches, filling the bucket almost up to the top. Forget about the new, fancy presses. Our hosts found one a classic apple cider presses at a farm auction. It was made to last (and boasted a Made in America label).

Pressing was the hardest part of the process because you need to crank down on the press to produce the cider. Lisa had the easy (but important) job of collecting the apple cider in a pitcher or other container.

Lisa made sure we didn’t miss a drop. Miraculously, the yellow jackets left us along for most of our process (only three bees inspected our operation).

Lots of help and guidance was offered to the “relief” apple-press pushers. A white, laundry bag with holes worked perfectly for capturing the leftover apple pulp, which was later composted.

The final apple cider was poured in a dizzying array of vestibulesâ€”even maple-syrup jars that were all cleaned out and a sanitized before refilling with the cider. Of course, that’s after we all sampled the beverage of our labor.

We drank our cider unpasteurized. If you want to be more conservative and reduce any chance of harmful bacteria, heat the cider up to a high temperature (at least 170 degrees F) for a short time. This process, while killing possible bacteria or parasites in the cider, will also diminish some of the nutrients and change the taste, too. We refrigerate or freeze our apple cider immediately if thereâ€™s too much to drink within a couple days.

If in addition to drinking your cider fresh, you want to put it to use in farm-fresh recipes, try these for Hot Gingered Apple Cider and Boiled Cider Pie.