Last week I brought home a load of cow manure from my neighbor Roger. 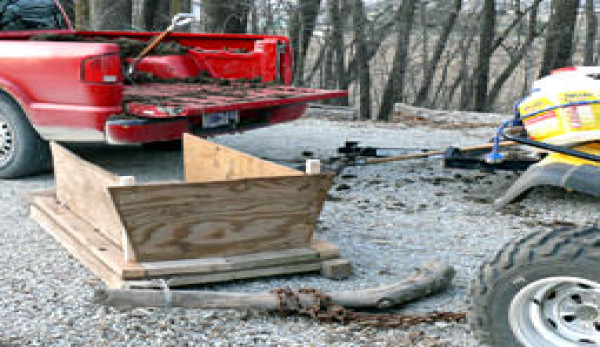 Last week I brought home a load of cow manure from my neighbor Roger.

Roger keeps a beef herd, and over winter the manure collects around the hay sheds and other feeding areas. When I asked if I could buy a load to compost for our gardens, he insisted that I help myself, but I needed to hurry as he was starting to spread it on the fields.

An hour of work with a fork had my truck bed filled, and I left Rogerâ€™s yard, leaving behind an embarrassingly small hole in his pile of cow-power fertilizer. I also left behind a promise to drop off a raspberry cream cheese pie and a set of raspberry plants I was clearing out.

What I didnâ€™t have was a clear idea of how I was going to get the manure down the hill to my gardens. I really didnâ€™t want to use the wheelbarrow, and it would mean a great many trips with my ATV loader. Night was falling, rain was expected and I needed it out of my truck.

I realized that what I needed was a sledge or sled, what my father used to call a â€śstone boat.â€ť

The goal was something I could pile high with manure and tow behind my ATV.

Now a sledge has to be one of the oldest implements ever devised. It would have been a small step from the caveman who dragged a tree branch to the fire to the guy who tied a couple of branches together and loaded it with meat to haul home from the mastodon hunt.

I didnâ€™t necessarily have what I needed to make a proper sledge or the time or inclination to go buy anything new.Â  This was, of course, an opportunity to justify the scraps I hadnâ€™t thrown out. I just needed to â€śmake do.â€ť

An hour of banging old timbers and scrap plywood together and I had my sledge.

I would like to say that it was a significant step up from those branches, but it was probably more similar than I would like to admit. It was certainly nothing fancy, but it worked. The first load was a small one, just a test of what the sledge could handle. The second and third were piled higher and deeper.

In no time, the pickup was empty, the sledge was empty and I was headed down the road with Rogerâ€™s raspberry pie. Sometimes making do isnâ€™t so bad. In my next entry, Iâ€™ll run through what you need to make your own sledge.