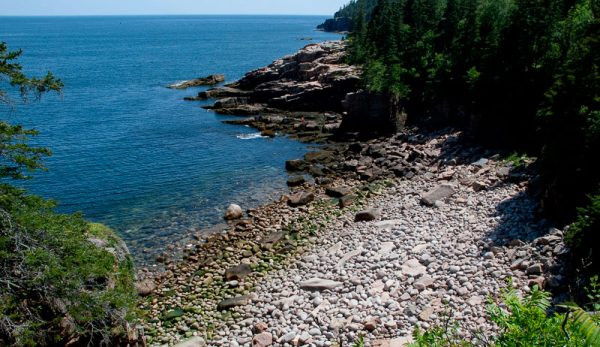 Farming and gardening cannot happen without soil, yet we rarely pause to consider the forces of nature that create this essential element of our food system. The coast of Maine, where water and wind blast the bedrock, is a dramatic and impressive place to observe the formation of soil. Watching soil form is more exciting than it sounds. It became the theme of how I spent my summer vacation in Maine.

At Acadia National Park, I hiked up Penobscot Mountain, and I do mean up! Its peak is at the not-too-daunting elevation of 1,200 feet, but the shortest route includes scrambling up boulders and scaling slabs of granite that seem to have tumbled down from the top and miraculously landed forming steps. (Thank you, Acadia trail builders.) In the 17th century, newcomers to North America called these barren mountaintops deserts, but they are not really that desolate. Berry bushes, ground cover, spruce, junipers and pines grow out of what appears to be solid rock.

Throughout my trip to Maine, I traversed hardwoods, pine forests, meadows, marshes and ponds, finally landing on another small island in Boothbay Harbor. I wondered how there could be enough soil to support diverse life, including small farms on rocky islands. As I traveled with this question in mind, I observed the natural processes turning bedrock into fertile tilth.

Which comes first, a seedling or its bed? The seeds blown onto mountaintops need only a thin layer of loose dirt to sink in their little rootlets. But they must be patient and accept any growth as good growth, however small it might be. The mountaintop plants must be hardy and stocky. They are often stunted compared with trees and shrubs the same age found in more protected environments. Roots themselves are covered in bark to endure exposure to buffeting winds, which felt brisk to me even on a sunny July day.

Tough and persistent, just like the oak tree roots under my sidewalk back home, the roots push a little, and a little more, and a little more, reaching for nutrients and protection. Maybe they just let the lichens and mosses cover the hardest stone and get it softened up for them before they begin their struggle.

The mere presence of plant life creates a microenvironment where changes in moisture, temperature and chemistry slowly affect the substrate. Freeze-thaw cycles intensify the effects on the rock, widening cracks (and breaking off slabs that become trail steps, for example) or creating smaller debris that falls into crevices. Bacteria and fungi find their way into the moist habitats and help those reaching rootlets find the food they seek. As plants grow and die, organic matter accumulates. The persistent wind brings dust to mingle with the forming soil and supports the next generation of plants.

A sea-kayaking guide peppered me and a group of tourists with factoids about the island flora and fauna. Beavers, it turns out, are a big reason that farming is possible along the Maine coast. These ecosystem engineers create more than lodges and dams. Beaver activity, given enough time, can eventually result in turning a rock-bound stream into a fertile valley. Triggered by the sound of running water, beavers work to dam the flow and turn it into a pond. Thatâ€™s where they like to store their food, in an underwater cold storage space. Of course they kill a lot of trees in the process, yet they also create a new habitat for plants and animals that thrive in still water.

Given about 10 years, they will have completely changed the population of life in the dammed area. Sediment accumulates on the bottom of the pond, and with less water flowing in and out, the water body slowly becomes a wetland or an open meadow. Beavers donâ€™t live in one house forever. The ponds and wetlands they abandon have been studied for their higher diversity of all types of plant and animal life than non-impounded areas nearby. The changes that beavers make can affect the landscape drastically for centuries. Erosion occurs upstream, and the structures the beavers build catch it and keep it in place.

Build It Up and Let It Rot

Gardening on an island is a true test of self-reliance (if youâ€™re opposed to frequently boating to the mainland for supplies). The Isle of Springâ€™s community compost bins attest to the build-it-yourself approach to making soil: Use your scraps.

On Isle of Springs, the rare occurrence of flowing, fresh water attracted the Wabanaki people, the original settlers of the island. The springs are still there, but not as pure as they once were, and drinking water is piped across Boothbay Harbor. (Those pipes run above ground, because digging is pointless on solid granite.) The small layer of topsoil is reserved for fields of wild blueberries and huckleberries.

Since 1887, the island has been a summer resort, where a central hotel would feed three meals a day to vacationers staying in the dozens of houses on the 100-acre island. Those meals were local, for the most part. Postcards from the early era show cows gazing out at the sea from the islandâ€™s pastures. A hundred and thirty years later, visitors haul LL Bean tote bags full of groceries to the island, but thereâ€™s still a remnant of the locavore life at the old farmhouse. Betsy Morrell, a talented landscape designer, lives there part of the year and tends the organic garden. The entire human community benefits from the salad greens, veggies and herbs grown there, but the garden has to be protected from deer, raccoons, squirrels and other island wildlife. Good soil and good food appeals to everyone.

Geologists consider the soil on the rocky coast of Maine to be â€śyoung,” at around 15,000 years. Weathering and erosion is the slowest of the natural soil-making systems. Building a dam that collects sediment and organic material works quite a bit faster. Composting speeds up the entire process and supplements the minerals that the rocks have been ground into. If a vacation is about slowing down and appreciating the finer things, I think there’s nothing better than watching the elements do their work.