The ancient Malay is best suited to fanciers and breeders wishing to revive the lines of Oriental poultry. 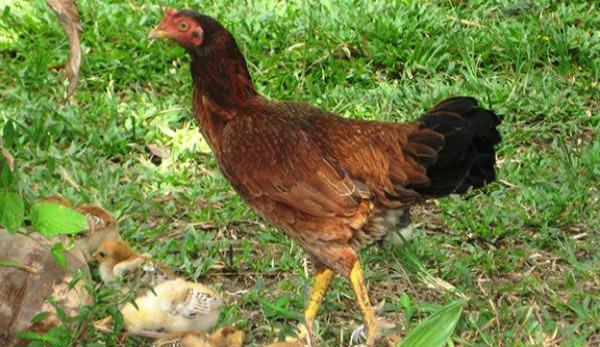 Use: The ancient Malay is the tallest of all chicken breeds and is best suited to fanciers and breeders wishing to revive the lines of Oriental poultry. Hens make unreliable layers and typically lay for a just a few months out of the year.

History: Once intended for fighting purposes, the Malay is an extremely ancient breed descending from the great Malay or Kulm fowls of India. Itâ€™s likened to the Aseel breed of India, with origins dating back nearly 3,500 years, though it is impossible to determine which breed is older. By 1846, Malays were the first Asiatic fowl of this enormous size to arrive in America. The breed was admitted into the American Poultry Associationâ€™s Standard of Perfection in 1883.

Conformation: Standing as tall as 26 to 30 inches in height, the Malay is one of the tallest chicken breeds. The APA recognizes six color varieties: Black, Black-Breasted Red, Red Pyle, Spangled, Wheaten and White. Malays are often described as having a cruel expression, a result of their overhanging brow bone. Shanks are typically yellow with large scales and range from dark-horn to dusky-yellow. The strawberry comb, wattles, and earlobes are small and red. Standard Malay cocks weigh 9 pounds and hens weigh 7 pounds. Bantam cocks weigh 44 ounces and bantam hens weigh 36 ounces.

Special Considerations/Notes: The modern Malay chicken breed still displays some aggression toward other chickens, a remnant of its fighting days. The breed is intolerant of confinement and is best kept separated or with a maximum of two hens; however, it can become quite friendly toward keepers and is wonderful for showing. Because of the Malayâ€™s height, keepers should keep placement of food and waterers in mind. The Malay chicken is listed in the Threatened category of the American Livestock Breeds Conservancyâ€™s Conservation Priority List.