Man & Goat To Wrap Up 5-Year Walk In NYC

The coast-to-coast fundraising campaign Needle2Square is about to come to an end as a man and his goat approach Times Square after five years on foot. 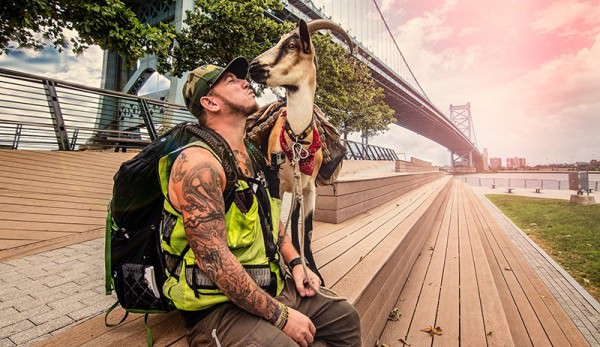 When Steve Wescott set out across the country five years ago, traveling from Seattle to New York to raise money for an orphanage in Africa, he was just a city boy with a passion. He didn‚Äôt know anything about camping on the open road. He thought no one would talk to him as he journeyed through unfamiliar cities and rural landscapes, stopping only during the winter when snow hit. And he knew absolutely nothing about his walking companion‚Äîan Alpine-Boer goat cross.

Well, a lot has changed since then‚Äîand even since we last caught up with him about his fundraising project, called Needle2Square, about a year ago. For starters, in the past year, the team has more than doubled their funds raised for Uzima Outreach, a friend‚Äôs substance abuse and orphan ministry in Nairobi, Kenya, thanks to a lot of media attention and cheerleaders encouraging the human-goat duo on toward their goal. As they passed through Washington, D.C., about a month ago, donation totals exceeded $100,000, which will help the orphanage purchase 2 acres of land that will be farmed to help feed the children and keep the organization become more self-sufficient.

‚ÄúMy goal is building something so that when I‚Äôm done, we can pass on an organization that is stable and steady,‚Äù Wescott says. ‚ÄúThe main goal is to be wise and grow slowly to maximize effort in each individual child and to help them thrive.‚Äù

That‚Äôs the good news. But Wescott has also learned some tough lessons on the road, as well, especially when it comes to goat-keeping.

In October of last year, Wescott‚Äôs original travel companion, Leeroy, passed away near Dayton, Ohio, from an overdose of grain, which can be fatal for goats. This was a devastating blow to Wescott, who felt as if he lost his best friend.

‚ÄúWe hung out at 7/11 and drank slurpies and talked about girls,‚Äù he says. ‚ÄúHe was my boy. I loved that goat more than just about anyone in my life.‚Äù

Leeroy wasn‚Äôt Wescott‚Äôs first pick for a road-trip partner‚Äîin fact, he didn‚Äôt know anything about goats prior to setting out on his journey. But when his dog was hurt in a dog-park confrontation, Leeroy stepped in to do the job.

Because goats are pack animals, Leeroy was able to help Wescott tote more supplies than his dog‚Äîsome of which he realized weren‚Äôt necessary, like folding camping chairs. And the goat was a fearless leader for the herd of two‚Äîand a superb fundraiser at that.

‚ÄúGoats don‚Äôt talk, but they‚Äôre huge conversation starters,‚Äù Wescott says. He attributes Leeroy‚Äôs ability to work the crowd as the No. 1 reason the fundraising campaign become so successful. ‚ÄúThe only reason people talked to me was because of the goat.‚Äù

So when Leeroy passed on, Wescott knew he couldn‚Äôt continue the journey alone. His administrative team found a selection of candidates that met the qualifications for a goat on the move, and that‚Äôs how he met Miles‚Äîand learned that no two goats are alike.

‚ÄúIf Leeroy was like Bruce Willis, this one is like Miley Cyrus,‚Äù Wescott muses. ‚ÄúHe‚Äôs a diva. He only wants organic everything. He Ubers everywhere and only wants triple filtered water.‚Äù

Hyperbolic, sure, but the change definitely affected the Needle2Square journey. Whereas Leeroy never said no to getting up and hitting the road, early mornings have been awkward and clumsy for the new duo.

‚ÄúThe first 1/2 mile is rough‚Äîwe‚Äôre connected by a rope for safety and we get tangled and he pulls me in the wrong direction,‚Äù Wescott says. ‚ÄúThis damn goat is teaching me patience. We don‚Äôt have that chemistry Leeroy and I had, but we‚Äôre working together on that.‚Äù

Nevertheless, it will be Miles‚Äîand busloads of supporters from across the country‚Äîwho will be by Wescott‚Äôs side as he crosses the finish line into Times Square, ending five summers worth of walking across the country and jumpstarting a new era for the Uzima Outreach ministry.

From there the duo will part ways: Miles to live out his goat life on a to-be-determined farm, and Wescott to hop on a plane to Africa to do some work with the orphanage. When I ask him if he‚Äôs going to get a goat of his own, he‚Äôs a little unsure: ‚ÄúYou can‚Äôt walk halfway across America with a goat and not have one. I want to say yes, but my first priority is making myself available for fundraisers.‚Äù

But he does contend that a goat‚Äôs personality makes it the perfect pet, which he sees as a cross between a dog and a cat, for someone wanting a balance of companionship and independence. And forget the notion that goats are naughty animals.

‚ÄúI asked my goat to behave like no other goat has to. I expected such high obedience and tolerance‚Äîpeople are shocked with how well-trained my goats are,‚Äù Wescott says. ‚ÄúGoats understand and can behave. If your goat misbehaves, it‚Äôs a little bit on you.‚Äù

Rachael Dupree is the former managing editor for HobbyFarms.com. She grows food and medicine on her 50-acre farm near Lexington, Kentucky. When not out working her land, you can find her in her kitchen not following recipes, on her yoga mat in a satisfying pigeon pose, or exploring the world‚Äôs nooks and crannies. Follow her on Instagram @rachael_dupree.

3 Reasons To Use A Laddered Perch For Chickens