Breed Profiles: Get to Know the Mangalitsa Pig

The wooly hog almost went extinct, but now Mangalitsa pigs are back. Could this heritage breed be right for your hobby farm? 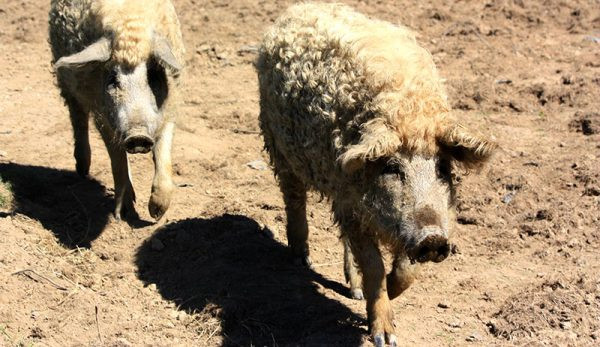 The animal pictured above goes by the name Mangalitsa (or sometimes Mangalica or Mangalitza), and it is, in fact, a pig. But itâ€™s one wooly porker. A heritage breed lard pig, the Mangalitsa was developed in Hungary (from hardy pigs of Hungarian and Serbian decent) in the early 1800s. Crossing hardy pigs with hardy pigs created, you guessed it, very hardy pigs. These low-maintenance hogs quickly became the most popular porkers in Hungary, where the National Society of Fat-Type Hog Breeders was established in 1927 for the express purpose of improving the breed. Itâ€™s estimated that the number of Mangalitsa pigs in the country reached 30,000 in 1943.

It wasnâ€™t just their hardiness that made these wooly pigs so popular. Mangalitsa means â€śhog with a lot of lardâ€ť in Hungarian, and the name wasnâ€™t misleadingâ€”thereâ€™s a lot of fat under those curly locks. While modern hog farming has moved away from lard pigs in favor of long, lean Hampshires, lard was once cherished for its many uses: cooking, sure, but it was also crucial for making candles, soap, cosmetics, industrial lubricants and even explosives.Â

Alas, this nomenclatural feature was also its eventual undoing, as the mid-20th century introduction of hydrogenated vegetable oils (coupled with the new medical thinking that saturated fats were bad for health) meant lard-producing livestock fell out of favor. The dawn of industrial farming, too, had begun, and the slow-growing, pasture-primed Mangalitsa didnâ€™t work for farmers who wanted fast, barn-raised pork.

And thatâ€™s how we almost lost what was once Hungaryâ€™s favorite pig to extinctionâ€”in 1990, there werenâ€™t even 200 examples of the breed alive on the planet.Â Â

Luckily, thatâ€™s not where the story ends. AÂ Hungarian animal geneticist named Peter Toth saw the approaching end of the Mangalitsa line and sought as many purebred pigs as he could find. He launched a breeding program on a whitewashed farm in Debrecen, Hungary, and eventually founded a company around the endeavor, Olmos and Toth, which breeds and raises the hog for high-quality ham. Olmos and Toth also works extensively to preserve and promote the heritage breed.

Today, Mangalitsas are back. More than 160 breeding sites exist in Hungary, and the breed has recently become popular in other countries, even as far away as the U.S. Putnam, a breeder in Washington state, imported a herd of 24 from Austria in 2007. Marc Santucci and Wilhelm Kohl of Pure Mangalitsa imported six more to Michigan in 2010, and more were imported stateside in 2014 and 2016. Since then, the breedâ€™s popularity has spread across the U.S.Â Â Â Â

So are wooly pigs right for you? They are, admittedly, best suited for hobby farms, where bottom lines are less important than they are to dedicated meat producers. They take much longer to grow out than white pigs, requiring more than a year to reach 300 pounds, which is when their distinct fat marbling is at its peak, double the 5 or 6 months that other pigs need to reach maturity. Their litters are also smaller than modern pigs, usually around five to eight per farrowing.

But, oh, how theyâ€™re suited for hobby farms! Mangalitsas, aside from being an interesting addition to a farm, are a hearty, low-maintenance breed. But they arenâ€™t no-maintenanceâ€”while youâ€™ll commonly find claims across the internet that these hogs require no shelter, the truth is that even a pig with a protective coat such as the Mangalitsa needs a dry, shady shelter to escape inclement weather. (According to Barbara Meyer zu Altenschildesche of Royal Mangalitsa in the Netherlands, â€śIn Hungary, they all have stables. Not a single pig there has no shelter, and I have visited dozens of farms there.â€ť)

Theyâ€™re excellent foragers who supply much of their own feed if given adequate land to roam. You can speed up their growth rate by providing some barley, wheat, alfalfa, wheat bran or sunflower seeds, though soy and corn arenâ€™t recommended. (Some people cross them with Berkshire pigs, too, for a full-flavored, but faster-growing pig.) Mangalitsas have an easy temperament, and theyâ€™re really beautiful to look at. They have curly, wooly coats of red, black and, most commonly, blond.Â Â Â Â Â Â

Finally, the meat is delectableâ€”it turns out that fat is flavor, and these lardy pigs have plenty of both. (Thereâ€™s a reason big-name chefs have rushed to get Mangalitsa pork on their menus.) These pigs make amazing hams and sausage, and the belly and loins are succulent roasted.Â