On Hurricanes and Pig Poop: Tips on Managing Manure

The manure lagoons flooded by Hurricane Florence show that pigs produce a lot of waste. Managing manure correctly on small farms is key to protecting waterways and gaining valuable fertilizer. 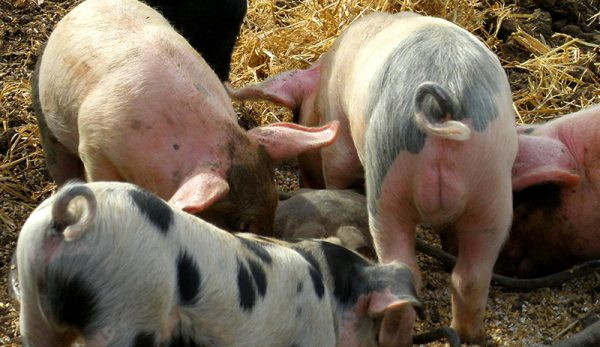 As I write this, the massive Hurricane Florence is pummeling North and South Carolina. When this story posts, weâ€™ll be evaluating the extent of its damage, but at the moment all Iâ€™m able to do is hope things wonâ€™t be as bad as Iâ€™m hearing they might be. And while the countless lives set to be affected by the storm are front and center in my mind, thereâ€™s another effect Iâ€™m also concerned about: all the pig poop in North Carolina.

North Carolina is the second-largest pork producer in the U.S. and home to about 9 million pigs (the stateâ€™s human population is, for comparison, just more than 10 million). Knowing that a feeder pig can produce close to 10 pounds of feces per day, that means the state deals with about 9 million pounds of hog poop per day. For industrial hog farms, the most practical method for disposing of this, uhm, stuff is giant lagoons. Yes, like in a farmhouseâ€™s septic system, but much larger: Some can be as big as a football field. The manure is moved to these chemically treated lagoons to liquify, then typically sprayers spread the solution over neighboring fields as fertilizer.

Gross, yeah, but also problematic when Mother Nature acts up. Rainfall from recent hurricanes has flooded these lagoons, and manure from 1999â€™s Hurricane Floyd contaminated estuaries and created algal bloom that ended up killing a lot of fish. Groundwater contamination is another very real concern when literal tons of pig manure is freed from the lagoons. Manure lagoons are designed to withstand 25 inches of rain, and Florence is predicted to deliver 40 inches in some areasâ€”a total of 18 trillion gallons of rainfall are expected in the stateâ€”so we might soon see the effects of failing manureÂ lagoons on a vulnerable area.

Most Hobby Farms readers probably don’t have manure lagoons on their properties, but these examples provide an opportunity to evaluate our own pig-farming practices. To start, we should feel extra happy about the choices weâ€™ve made to raise our own meatâ€”well done, all. But itâ€™s also a stark reminder that we need to be mindful of where our hog poop goes in order to ensure it doesnâ€™t end up in waterways or contaminate the water table.

Pasturing pigs or keeping them in drylots provide obvious alternatives to manure lagoons. When pigs are raised outside, their feces are deposited in open air and sunshine, and the waste acts as fertilizer as isâ€”no liquefaction or spraying required. But carelessness or a lack of planning can lead to problems, so mind these tips to keep your farm operations environmentally friendly.

Pigs can tear up a small pasture in a matter of days, so plan ahead to ensure your animals and their feces donâ€™t overtax the land. If you have the acreage, a spoke wheel system is ideal, with a sacrificial area in the center and fenced-off pastures extending off from it, like a wheelâ€™s spokes. If you donâ€™t have enough land for that, fence off a few pastures between which pigs can rotate so they donâ€™t root up grass necessary to minimize feces runoff in heavy rains.

After rotating pigs out of a pasture, take some time to manage the waste theyâ€™ve left behind. You can collect feces to compost 1:1 with straw, or you can just run a harrow across the pasture to spread the poop, exposing parasites and pathogens to the sunâ€™s deadly rays. If you have chickens, they can be coaxed to help out, too.

A grassy buffer zone between pastures and waterways prevents runoff from polluting fresh water and causing problems. Just make sure thereâ€™s a strip of vegetation at the bottom edge of your pasture or drylotâ€”Kelly Klober’s Storey’s Guide to Raising Pigs recommends a width of 10 to 20 feet. Buffer zones are common conservation practice, as they also keep nutrients from washing off the farm during heavy rains.