How To Mark Hay Bales From Different Fields & Cuttings

All hay is not equal, and it's important to know what hay comes from where and when. Here are some ways to mark your hay bales for easy identification. 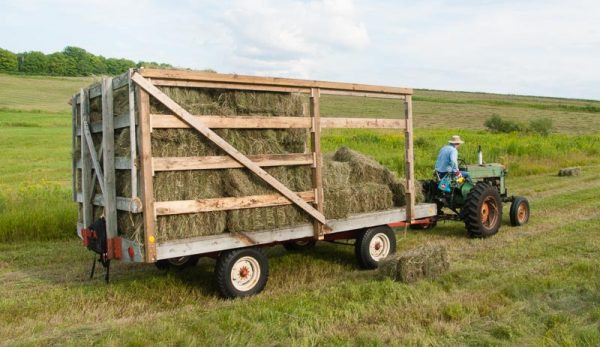 You might assume storing small square hay bales is a fairly simple process. Don‚Äôt you just stack them any which way in a sheltered building and feed them one by one until the annual crop has been consumed?

Yes and no. It sounds logical in theory, and with a bit of planning it can be a simplistic approach to strive for. But the truth is, not all hay is the same.

Different fields might yield different types of hay‚Äîalfalfa, for example, or clover. Some bales might be from the first cutting of a field and others from a second cutting. The difference can be significant, with bales from second cuttings generally being denser and more nutritious.

Farmers experienced in dealing with hay can determine a lot just by the physical appearance of each bale. But a more foolproof approach is to keep accurate records and mark hay bales in some manner.

That way you can easily identify later on which are which.

What you need to know to grow and produce hay for your farm’s needs.

If you have an abundance of storage space, the simplest solution is to create one stack for each field and/or cutting and mark each stack accordingly.

But sheltered storage spaces are usually at a premium on farms. So if space constraints require you to stack all your hay together, an alternative is to divide the master stack into sections. One corner can be reserved for Field A, another corner for Field B, etc.

Is there a noticeable difference in the appearance of adjacent bales? Then it will be easy to distinguish in the future where one section of the stack transitions to the next. If the bales are similar in appearance, consider placing markers within the stack to delineate the boundary. You can use pieces of cardboard a or a long strand of baling twine.

Here’s how to calculate baling twine needs for hay season.

Speaking of baling twine, if you really want to get fancy, color-coded baling twine can be a terrific way to mark hay bales from different fields and cuttings.

Polypropylene baling twine comes in many different colors. By switching the color in your baler each time you switch fields, every bale you produce will be marked unmistakably in a manner that can be gauged at a glance.

Whether you adopt one of these approaches or develop a different technique that suits your specific situation, the key is to be diligent in your recordkeeping.

In short, a little organization can go a long way. Good luck during hay season!