The coronavirus pandemic has forced many businesses to pivot, but if your farm is able to adapt, your products can succeed in the changing times. 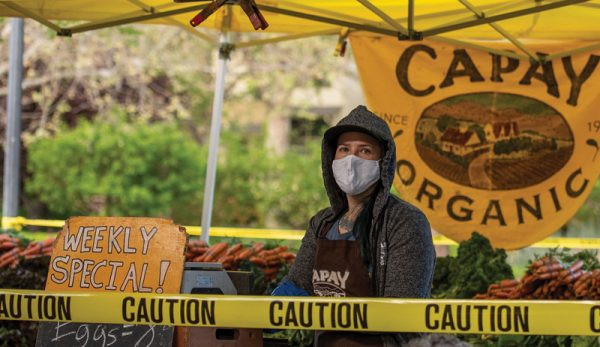 Business owners worldwide have had to get pretty creative in order to survive the global coronavirus pandemic. With so many spring retail, restaurant and bar closuresŌĆöalong with the patchwork of shelter-in-place ordersŌĆöcame a cascade of economic and social effects.

And, while some farmers are really struggling, others have managed to thrive.

How well your own farm weathers the COVID-19 pandemic depends a lot on your marketing efforts in general. Your ability to pivot as needed also matters. In part, that means staying in touch with and finding new ways to serve your existing customers.

But you can also make hay with the wave of new customers who are increasingly cooking and eating at home.

Although Leung usually sells her specialty goods in retailers across the U.S., many of these are now closed. So, she and other area farms are pooling their marketing resources and working together to stay solvent through online pop-up shops.

ŌĆ£The farmer I am working withŌĆöFreville FarmŌĆösheŌĆÖs quite savvy in marketing and all that,ŌĆØ Leung says. ŌĆ£She has several farmers and makers with a section on her website right now. ThereŌĆÖs a cut-off time for [customers to place their orders] and thereŌĆÖs enough time for people to make things.ŌĆØ

Then, customers come during appointed time slots to claim their purchases, which are placed directly into their carsŌĆÖ trunks.

Do you want to start a pop-up shop where you are? ŌĆ£If itŌĆÖs a community of farmers, pick the one thatŌĆÖs the most prolific at social media and publicity,ŌĆØ Leung says. ŌĆ£Maybe thatŌĆÖs the central place to make your pop-up, and itŌĆÖs on their website.ŌĆØ

ŌĆ£ThatŌĆÖs probably the easiest way to promote yourselfŌĆöespecially if you are doing things that are food or tactile or that are visual,ŌĆØ she adds. ŌĆ£And [the group of farmers involved] kind of promotes that to the central page of the person who is holding the pop-up.ŌĆØ

Read more: Here are some ways to build your farm’s brand through social media.

ŌĆ£Right now, a farm could basically put up a Google form and take orders over email, and thatŌĆÖs probably going to be fine,ŌĆØ says Simon Huntley, CEO and founder of Harvie, an online platform that facilitates direct-to-consumer produce sales for small and medium-sized farms across North America.

ŌĆ£If farms are selling to restaurants or to wholesale clients, then they are more at the mercy of what the market is going to give them,ŌĆØ Huntley says. ŌĆ£Some of those farms are in big trouble. TheyŌĆÖre having to make really big shifts to their business models if they are going to stay afloat at all.ŌĆØ

These days, a farm that is set up to sell direct to consumers is well-positioned to take advantage of the unprecedented demand for local produce created by the pandemic.

ŌĆ£Probably something like half the food was going through restaurants and large institutions,ŌĆØ Huntley says. ŌĆ£Now itŌĆÖs all going through peopleŌĆÖs home kitchens. Even at a macro level, we are having to shift how the food goes through our food system and how we get it to people.ŌĆØ

During the pandemic, Huntley has seen a 200 percent increase in sales of farm products. ŌĆ£I had already been calling 2020 the ŌĆśYear of Home Delivery.ŌĆÖ This was already happening, but, now, itŌĆÖs just like 100 times what it was before,ŌĆØ he says.

Harvie sent out a promotional email to a few hundred people offering home-delivered farm boxes. He received so many orders that the company had to shut down online sign-ups temporarily.

ŌĆ£If youŌĆÖre not selling direct to consumer right now, in some ways itŌĆÖs going to be hard to have a business,ŌĆØ Huntley says. As such, many farms that used to sell at in-person farmers markets have pivoted to sell via prepaid, drive-through farmers markets.

ŌĆ£If the transaction happens online, the farm can have everything preboxed when the customer gets there. They can just pick it up and go,ŌĆØ he says. ŌĆ£Then itŌĆÖs basically the lowest contact that can be done right now.ŌĆØ

Local home delivery might be another option to offer. If you already have a customer email list you periodically use, you can leverage that, along with social media posts, to gauge existing and new customer demand for pop-up shops, CSAs, home delivery and similar services.

When youŌĆÖre ready to implement new, low-contact, direct-to-consumer channels, use email, Facebook, Instagram and earned media (publicity gained through promotional efforts other than paid advertising) to spread the word.

And, Huntley advises: ŌĆ£Think about not only what you need for right now, but also whatŌĆÖs going to be a sustainable business model for you going forward.ŌĆØ

Read more:┬ĀCheck out these 4 tips for marketing your farm products digitally.

One way to be forward-thinking? ŌĆ£Be community-minded,ŌĆØ Leung says. ŌĆ£Be kind and thoughtful. If there are people who owe you money, let it slide a little bit.ŌĆØ

A farm can engender a lot of public goodwill while doing good during the pandemic. For her part, Leung has broken out her sewing machine. ŌĆ£Using fabrics that I had for the businessŌĆöjust because I liked the prints and it went with our brandŌĆöI started sewing masks for local health communities,ŌĆØ she says.

After Hudson Valley Magazine picked up the story, LeungŌĆÖs business received some unexpected publicity and many more people joined the mask-making movement.