The morning's peace and quiet is shattered by my (suspected) Coonhound-mix Pippin howl-barking and lunging at the living room window. 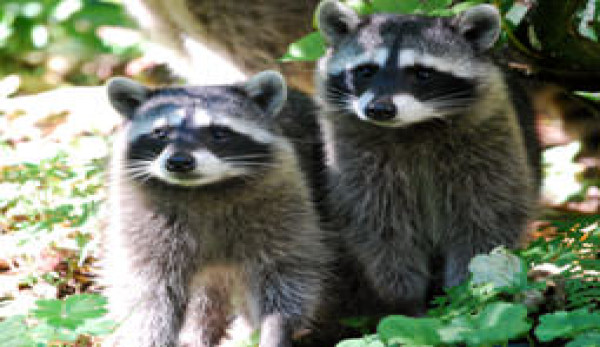 The morning’s peace and quiet is shattered by my (suspected) Coonhound-mix Pippin howl-barking and lunging at the living room window. He acts as though an ax-wielding murderer lurks on the front porch, but thanks to past experience I already have a good idea whoās come to call.Ā  Sure enough, looking out I find a masked face peering up at me. Not a human intruder, but a curious young raccoon checking to see if I’ve fed my feral cats, with his two shyer siblings peeking out from the nearby rhododendron bush.Ā

I hustle Pippin into another room, grab my camera, and enthusiastically snap pics. Raccoons are most active in the early evening and at night, so I’ve never had an opportunity to photograph them by day before. Eventually realizing they won’t get a free handout from me, the trio fans out across our marshy front yard to dabble in the grass and buttercups with their sensitive, dexterous front paws. Intermittently, they shove something into their mouthsāa slug or another pesty delicacy, I assume.Ā Ā

Raccoons are regular visitors here, both to my delight and utter frustration, depending on the circumstances. As a former zookeeper who cared for raccoons and other native mammals, I have a soft spot for these highly intelligent, curious and adaptable creatures. Not only are they fascinating to watch, but they’re super cute. However, they can also be super nuisances when they come around at night to taunt our dogs orĀ rip into the chicken coop to dine on our birds, as they did during one frigid, food-scarce week last winter.Ā

Despite this, we prefer to strive for a peaceful coexistence rather than wage war against an animal simply going about the difficult business of survival. For instance, reinforcing the coop with plywood has helped prevent more break-ins and putting out small amounts of food for my feral cats when the coons aren’t around helps keep them from becoming dangerously tame and obnoxiously dependent on this food source.

Here are some facts about these masked bandits:

The Washington Department of Fish and Wildlife provides some great information about coexisting with raccoons, including how to deter them from raiding garages and nesting in attics.