Prevent mastitis, a common udder disease in nursing goats, with good husbandry practices, and treat it with careful observation of your herd. 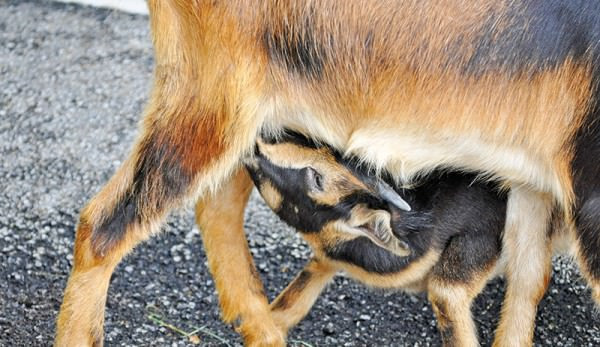 This is my first year keeping dairy goats, and Iâ€™m concerned about my does developing mastitis. What are some common signs and how can I treat it if one of my animals does develop it? Do I have to cull the animal, or can she continue to give milk after treatment?

Mastitis is an inflammation or infection of the udder, aka mammary gland, of dairy animals. It can have different causes, but the most common is bacterial, and the most common causative bacteria is Staphylococci spp. Bruising or injury to the udder can also cause mastitis. In some poor husbandry conditions, udder and teat anatomy may be another contributing factor. A sore mouth infection, aka orf virus, can be a cause of mastitis in meat-goat herds, especially if kids nurse from different does.

Caprine arthritic encephalitis causes a similar condition called hard bag. Hard bag affects both halves of the udder, whereas bacterial mastitis usually only affects one half. There is no treatment or cure for CAE-caused hard bag, and affected does should be culled expeditiously due to the contagious nature of the bacteria.

Early signs of mastitis include:

The doe may not allow the kids to nurse. The milk may look abnormal or be thicker in texture, and it may have blood or clumps in it. Sometimes, milk may not even be secreted. The mammary gland may be hard, swollen or reddish in color, and it may be hot to the touch. The doe may show general signs of illness, including fever, depression and loss of appetite.

Diagnosis is based on the observation of clinical signs, bacterial cultures of the milk and somatic cell counts. The California Mastitis Test can be used to diagnose mastitis in goats, but the results need to be interpreted for goats, not cows.

If caught early enough, mastitis can be cured, but it varies case by case. Infected does should be removed and quarantined from the rest of the herd, and kids should be removed for artificial rearing. Treatment may include antibiotic injections, as well as intramammary infusions of antibiotics. Corticosteroids, such as dexamethasone, may be administered to reduce the swelling.

Antibiotic use should be based on identification of the causative agent and in accordance with the recommendations of an experienced small-ruminant veterinarian. Few antibiotics are FDA-approved for use in goats, and extra-label drug use requires a valid veterinarianÂ client-patient relationship. Care must be taken to observe the proper withdrawal periodâ€”the time that must lapse before the milk or meat can be consumed from a treated animalâ€”for any drug administered to the animal.

Usually the affected gland is milked out, sometimes aided with an injection of oxytocin. In some cases, the affected half will need to be dried off, which requires limiting the doeâ€™s grain intake and holding off on water for up to 12 hours. Mastitis is usually a reason for culling, Â­especially if the udder has scar tissue and/or only one side is left functional.

While there is a likely genetic component to mastitisâ€”the somatic cell count may be heritable, for instanceâ€”the disease is commonly the result of environmental factors, including poor hygiene, management and milking procedures. Pens should always be kept clean and dry. Teat dipping with iodine or chlorhexidine solutions can help reduce the incidence of mastitis.

Proper drying off is essential for both dairy and meat does. Feed and sometimes water intake needs to be restricted to decrease milk production. Intramammary therapy at dry-off will help to eliminate existing infections and prevent establishment of new infections. Prior to breeding, udders should be palpated to determine the presence of scar tissue or other udder and/or teat abnormalities. Only does with healthy udders should be kept for breeding and for milking.

This article was written by Susan Schoenian, M.S., sheep and goat principal agent and extension specialist at Western Maryland Research and Education Center, and vetted by Lyle G. McNeal a livestock specialist in the Department of Animal, Dairy and Veterinary Sciences at Utah State University.

This article originally ran in the March/April 2016 issue of Hobby Farms.