Follow these tips to make the most of what's inside your high tunnel, extend growing seasons and generate income year-round. 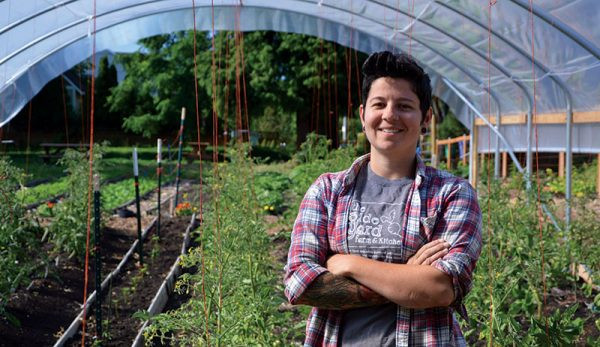 by Jesse FrostOctober 14, 2019
PHOTO: Tracy Robillard, NRCS/Flickr | Stacey Givens of Side Yard Farm and Kitchen in Portland, Oregon, stands in a high tunnel built with assistance from the USDA Natural Resources Conservation Service.

Thanks in a large part to the high tunnel grants offered by the National Resource Conservation Serviceâ€”where the full cost of a high tunnel is reimbursed to the farmerâ€”more farmers are putting more acreage under plastic. (For more information on the NRCS and its Environmental Quality Incentives Programs, visit this website and search â€śApply for EQIP.â€ť)

However, because growing under plastic requires slightly different management than field crops, itâ€™s easy to underutilize this space. So if you have a tunnel or are considering getting oneâ€”and you shouldâ€”this article will help you get the most out of your high tunnel and make it become a central part of your farm business.

One mistake new high tunnel owners often make is planting their tunnels in single row crops as one might in the field. This makes sense for tractor cultivation, perhaps, but is not the best use of this valuable space. Generally, large beds of between 30 inches and 4 feet are the best use of the soil so that walkways donâ€™t take up the majority of this high-value area.

Limiting pathways is important, and in some cases, farmers have no pathways, at least for a portion of the season (winter in particular). Pathways are planted to crops such as lettuce that can be harvested as whole heads or cut for salad mix throughout the seasonâ€”winter, spring, fall or summer, in fact (more on summer later).

If you donâ€™t need much winter crop production, high tunnels make a great place to keep chickens and other fowl in the winter. The idea here is to allow these scratching birds to eat any grubs or remaining pests while also fertilizing the soil for the upcoming season.

Of course, use caution when allowing animals such as chickens and perhaps rabbits whose manure has high nitrogen levels into a growing space for too long, as they can certainly make the soil too rich for certain crops. Plus, all the same pathogen issues among the flock can arise if itâ€™s left in one place for too long, so chickens naturally should still be managed in a way that reduces risk of disease, especially in an enclosed area such as a tunnel. Ventilation is necessary, of course, but all that said, tunnels are an excellent place to move animals for colder spells or to brood them in the early months.

In a place as warm as a tunnel can be, one might want to sow heat-loving crops such as sweet corn to get an early crop, but there are more profitable uses of this space. Sweet corn, to use that example, is still a low-profit crop with high nutrient needs and a slow maturity rate of 70 to 100 days.

The crops that suit the tunnel best are fully ready within 60 days (lettuce and spinach, for instance) or produce for several months (such as tomatoes and peppers). Using this space for slow, one-off crops such as corn or even broccoli, in some cases, means you limit the number of crops that can come through your tunnels and also the income you can generate from them.

However, some less profitable cropsâ€”because they are slow to produce, take up a lot of space or generally fetch a lower price at market (such as squash)â€”can be great tunnel options if they are trellised and pruned and produced early (and/or late) in the season. You can grow cucumbers and even melons profitably in these tunnels with the right management; choosing your crops depends a lot on your market and how much you can sell.

Transplanting crops is generally more recommended than direct seeding them. Exceptions include radishes because they are so fast (21 days or less) and carrots because transplanting them doesnâ€™t work well. Generally, however, youâ€™ll transplant crops and make sure that after one comes out, the next is about ready to go in.

The goal is really to consider what makes the most amount of money per square foot. That mean different crops in different areas, but this space should always be relegated to the crops that earn their keep the fastest, financially speaking.

Interplanting might make some farmers uncomfortable, as itâ€™s the act of planting two different crops in the same bed, sometimes in the same row, which can be nerve-racking. However, interplanting is a great way to maximize the available growing space and allow for some crops to come out of the bedâ€”lettuce and radishes, for instanceâ€”while other crops are growing, such as tomatoes or cucumbers. The goal here? Rather than having a crop such as tomatoes taking up an entire bed for a couple months before it starts production anything, you can have those beds produce profitable crops to maturity in the meantime. This can be challenging at first, but if you keep it simple, interplanting can be a great use of space.

A few simple examples of interplanting might be to sow radishes beside your tomato plants right as they are transplanted. The radishes are then harvested before the tomatoes are starting to flower. (Keep in mind that radishes are only a 21-day crop.)

You can also do this with lettuce if the market for lettuce is better in your area than it is for radishes. Or maybe itâ€™s arugula or baby kale. Or perhaps you sow carrots in the fall and harvest them down the middle to allow for transplanting of cucumbers, peppers or tomatoes. This way the carrots are still coming out while the other crop is going in. There are a lot of great options here, and it mostly depends on your market and climate. What can you sell and what will grow?

The main role of the high tunnel is extending oneâ€™s season, but this means more than extending it into the colder months. It can also mean extending the season forward. In other words, tunnels give you the potential to have tomatoes or cucumbers earlier than everyone else. Then, during the main season when everyone has those summer crops and the price is low, the tunnels can be used to bring fall crops to market ahead of the season.

This last point might sound counterintuitive, but cool-season crops, such as lettuce, grow really well in tunnels in the summer so long as the tunnel is well ventilated. The idea here is that the plastic provides enough shade to keep the intensity of the sun down. Now, this refers to crops such as lettuce, but all cooler season crops, such as beets and greens, need good irrigation and the occasional misting. However, the high tunnel provides an excellent option for getting these high-value crops to market before anyone else.

Of course, in very sunny climates, a small amount of shade cloth can also be draped over the top of the tunnel to reduce the intensity of the sun, which can, of course, burn up the more tender leafy greens. With the amount of sunlight the summer usually brings, however, these crops will be ready much faster than in the early spring and fall.

Because these tunnels can be expensive but hold so much potential for income, itâ€™s generally a good idea to calculate a rotation that keeps them fully planted all year long. For the winter, you can plant spinaches, kales, collards, lettuces, carrotsâ€”and anything else you feel you might have a good winter market for (or at least a hankering for over the winter months). These can be sown or transplanted in the early fall, and many last throughout the winter, depending on the season and the care.

You can also have many of those same crops for early spring harvests by planting them from December to February inside of your tunnels. The growth will be slow at first, but the sun slowly starts to return by March and the growth will begin to accelerate.

In early summer, shoot for the classic midsummer crops such as tomatoes, peppers, cucumbers and even eggplant. If you have a market for these, or a farmers market, the tunnel helps you to get there earlier and take early advantage of the demand.

For the latter part of the summer, try some early fall crops such as lettuces, beets and turnips. These are beautiful additions to a market table and customers will be excited to see something new among the summer bounty of tomatoes, corn, cucumbers, peppers and eggplant.

Then, for the fall, perhaps instead of loading up on fall crops (which in most areas can be grown with little cover in the field), you can extend you summer crops beyond their regular season. Keeping tomatoes and cucumbers past the first frosts can have an enormous financial benefit as customers are still seeking them.

Itâ€™s worth emphasizing that your market should determine what you grow, not necessarily by your infrastructure. However, it can be very worthwhile testing a few new items slightly before or after their season and seeing how customers react. In the case of items such as tomatoes, spinach, lettuce and cucumbers, finding a market out of season is not generally a challenge.

Outside of the Box

Itâ€™s worth noting that heat and plastic covering donâ€™t equal sunlight. In the colder months, things slow down even if some form of heat is added. For this reason, some farmers add grow lights to their tunnels in an effort to extend the day length when the daylight is minimal from December to February.

Tunnels can also be converted into wash/pack stations in the winter, or propagation houses for selling young starts at market in the early part of the spring. Mushroom production can be a great use of these spaces. Microgreens can be a very high value use of high tunnels as well. Because the environment can imitate the tropics in many ways, more tropical and subtropical fruits such as lemons and figs can be produced in a high tunnel situation with minimal heating. Or, perhaps they could be used as an event space.

Ultimately, high tunnels can be some of the most productive and valuable spaces on a farm. They let farmers extend their seasons and produce crops earlier, and in some cases they accommodate producing crops that might not typically grow in certain areas. So if youâ€™re considering high tunnels or just want to make better use of the one you have, the difficult part isnâ€™t always the act of growing in a tunnel but the overwhelming and endless challenge of deciding what to do with it.