Meadowsweet And Its Connection To Aspirin

Salicylic acid, whether isolated or contained within a medicinal plant, can be helpful to many people, though it’s important to exercise caution when using it. 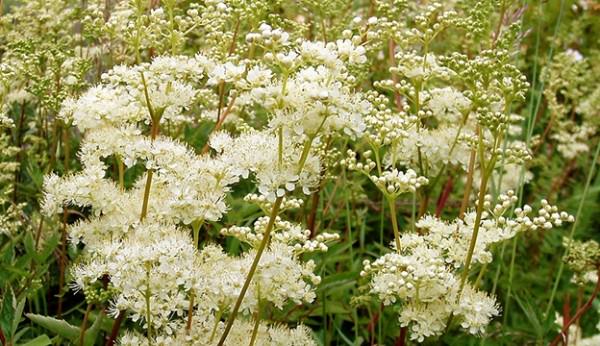 Hippocrates first popularized the use of plants in the willow family for headache. At the time, powdered bark was the “drug” and the salicylic acid was part of a complex interaction of chemicals found within the plant. In the 1700s, the scientific community became fascinated with the idea of isolating parts and pieces from the natural world around us and determining what was “active” and “inactive” within our historical remedies. At this point, salicylic acid was removed from willow bark and began to be used on its own. Unfortunately, without its community of willow bark chemicals to provide buffering, it was most certainly effective but also very harsh. Salicylic acid on its own was found to be hard on the stomach and very likely to cause internal bleeding.

As our lab analysis of plants continued, we found that salicylic acid was in many other plants. One such plant was meadowsweet (Filipendula ulmaria), also called queen of the prairie. This beautiful plant was a native of Europe and had escaped across the pond to take up residence in North America. In 1897, scientists at Bayer were able to synthesize “aspirin,” a term they would go on to trademark in the United States as an acetylated salicylic acid. The company then put a lot of energy into telling the public that only acetylated salicylic acid was gentle for the stomach, so the use of plant-based medicine from willows and similar plants dropped in popularity.

Today, controversy continues to swirl around aspirin. The truth is that in many cases, the compound can cause inappropriate internal bleeding. Over the years, we have heard both that everyone should take a daily aspirin for heart health and that aspirin was dangerous for anyone to take on a regular basis. Unfortunately the reality isn’t black-and-white: There are folks who can benefit from aspirin use and others for whom aspirin isn’t safe.

Turning Back To Plants

But what about using plants? Is it safer to use a plant like meadowsweet instead of a chemically prepared aspirin. In some ways yes, and in some ways, there is still reason to exercise caution.

Meadowsweet is a member of the rose family (Rosaceae) and has leaves that resemble those of the raspberry. They have a beautiful white panicle (group of small flowers) that rise on elongated stalks from both terminal and lateral locations, blooming from June all the way through August. Mine tend to top out at about 3 feet tall, but they grow in a more moist area on clay soil—meadowsweet, in general, loves to grow in an open, well drained meadow (hence the name).

We mainly see the leaves of meadowsweet used for medicinal purposes. Meadowsweet contains salicylic acid, but it cools the system, whereas aspirin can irritate in. The plant excels at calming inflamed stomachs and tends to balance the acid/alkaline concentration within the digestive system. It is an alternative, aka blood purifier, which goes along with its ability to thin the blood, and it is often used to remove uric acid from circulation.

Is Meadowsweet Safer Than Aspirin?

It’s not as cut and dry to say that meadowsweet is safe and aspirin is not. The truth is a bit more muddy. I would feel more confident for the average healthy person to use the plant instead of an over-the-counter remedy, but this is because it is a more balanced chemical cocktail. I would still want to limit the use of any plant containing salicylic acid for someone who has an underactive thyroid, bleeding disorder, aspirin allergy or bleeding ulcer. It is important to remember that thinning the blood may be a great help for some conditions, but not all people are working through the same problems. Thinner blood can also lead to inappropriate bleeding and in some cases that could be a real danger.