It happened. On January 22, my apprentice and future son-in-law was born. 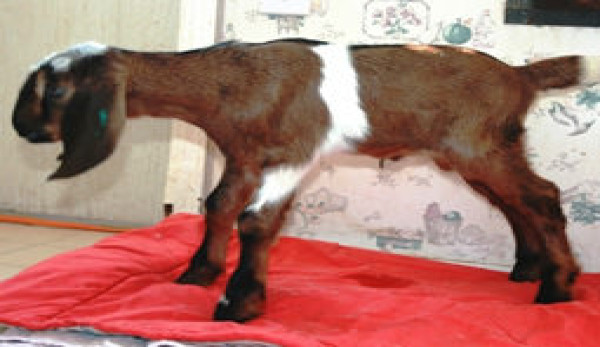 On January 22, my apprentice and future son-in-law was born. Mom and Dad brought him home fromÂ Ozark Jewels five days later, after he was disbudded (that means he got his horn buds burned so he wonâ€™t grow horns).Â

That evening freezing ice began to fall and then it started to snow. It snowed until there were 11 inches of snow on the ground, with three-foot drifts. Thatâ€™s a lot of snow in northern Arkansas.

Since it was really cold and slippery, Uzzi and I didnâ€™t go to the house to compute and Mom and Dad didnâ€™t bring the interloper out to our barn. He got to sleep in our warm bottle-baby bed in the house. We were stuck in our Port-a-Hut for days!

But yesterday, Dad carried him out to meet us. Heâ€™s a little brown goat with long white splotches on his sides and a black stripe running along his back.

His name is Ozark Jewels GeneralÂ Kerla and heâ€™s named after a Klingon general, just like me. I thought I wouldnâ€™t like him but heâ€™s kind of cute!

Jadzia looked him over up and down (her brother, Curzon, sniffed him up too). When Dad took Kerla back inside the house, we asked Jadzia what she thought of her husband-to-be. â€śHeâ€™s cute and he has nice ears,â€ť she said, â€śbut heâ€™s so little!â€ť

When we told her that by fall heâ€™ll be a big, burly buck, she sniffed and went back to eating. I donâ€™t think sheâ€™s impressed.

Momâ€™s doing something different with Kerla, though. Sheâ€™s teaching him to pee on a mat on the kitchen floor! He doesnâ€™t have to wear diapers the way that Uzzi and I did. That doesnâ€™t quite seem fair.

To train him, Mom takes him out of his baby crate at intervals and carries him to the pad. She sets him down and tells him to pee-peeâ€”and he does! Next sheâ€™llÂ clicker train him to go there by himself.

Soon, heâ€™ll be big enough to move outside withÂ the rest of us goats but he wonâ€™t move in with me and Uzzi until heâ€™s full grown. Thatâ€™s because Uzzi protects me and he has horns. So Kerla will live with my nephew, Edmund, and Mopple the sheep-geep until heâ€™s really big. Then there will be two studly bucks at our farm!Â