My husband's farm upbringing transformed him into the person he is today. 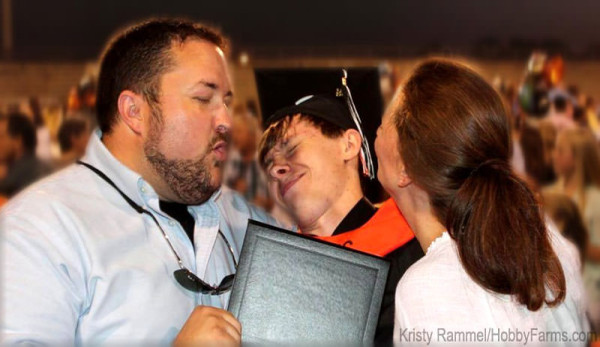 We look at children,ô our own and those of our friends and family, and say things like, “He has your eyes!ã or “She looks like her mother.ã We can look at the physical attributes, both good and bad, and see where in the family tree a child inherited their charming good looks or just got smacked with the proverbial ugly stick, but what about the stuff inside? What ingredients go into make the productive and non-productive members of society walking around the world today, voting, driving, teaching our kids and managing our money?

As parents, we like to think we are the potters that shape the mold of our childrenãs lives, but while we definitely contribute to who these little people will become, sometimes we must share the spotlight with outside influences.

This is a road I have found myself thinking about a lot lately. I look at myô oldest son getting ready to go off to college and think about his upbringing. I look at my own childhood, and think about the twists and turns in life I have taken that have brought me here. And I look at my dear husband of 20 years and think of the people that influenced his road in life. Outside of the physical attributes he inherited from his parents, I see the passion for land he learned from his grandmother and the “mister fix-itã attitude he got from his godfather.

A Farm Upbringing
My husband, Shawn, was raised in the city, but he spent his summers in small town USA in the deep country. (Actually, the only thing that made this a “townã was the local fillinã station/convenience store/post office.) He and his rambunctious male cousins would spend their days outside building forts, swimming in the crick (hereãs some southern vocab for you: crick isô local watering hole; creek isô the sound wooden floors make when walked upon), and of course, fine-tuning theirô hunting and trapping skills.

They were woken by 6:30 every morning and fed a hearty breakfast, after which they were scooted outside so they wouldnãt be under foot. They would spend hours in the woods until their stomachs called them in for lunch. After another hearty meal and a brief nap on a pallet beneath the living room fan, they would return to their outdoor adventures.

MawMaw, their grandmother, never missed an opportunity to get the boysô help in the gardens and would reward them with her hunting expertise. Every boy in her care learned to shoot, clean, and cook deer, squirrel and coon, as well as fish with old bread and fertilize veggies with fish parts. Those summers stayed with Shawn and became the driving force behind our move from city living to country life.

Fixinã to Learn
While his grandmother was versed in many aspects of country living, she did lack a certain mechanical ability. If something broke, and she could not afford to have it fixed, she simply did without. She grew up during a time when clothes were washed in tubs using scrub boards, so a wobbly washing machine was a luxury. However, a man lived in Shawnãs home state of Oklahoma who could fix just about anything: his godfather, Frank.

When Shawn wasnãt running through the woods in the country, he could be found at Frankãs, and he actually lived with his godparents for several years. When Shawn first moved in, Frank took the young boy outside to have a man-to-man chat. Frank informed little Shawn that they, he and his wife Jo, would provide all Shawn needed, but if there were certain things Shawn wantedãnew albums, for exampleãhe would have to earn the money himself. With that, Frank pulled an old lawn mower out of the garage he had recently picked up from the salvage yard.

“First thing youãre going to need to do is get her running,ã Frank told him. “But if you canãt find the right tool in my garage, youãre not doing it right!ã

Frank went on to tell Shawn the rules of the garage: You use it, you put it back. You break it, you buy it.

For the next week Frank and Shawn worked side-by-side cleaning, painting and repairing that old lawn mower.

One day Frank loaded Shawn and the lawn mower up in his truck and drove them to a house about a mile away.

Helping Shawn unload the mower Frank asked, “Do you remember your way back?ã Shawn nodded. “Good. Weãll expect you about 7. That gives you 10 hours or so. You should have plenty of time to cut this yard, and pick up a few more on your way back home!ã And with that he drove off.

Shawn usedãand repairedãthat old mower for years, and became quite the little entrepreneur, too. His yard care business quickly grew, and in the off seasons, Shawn worked with Frank fixing old appliances. Frank taught him to see the value in repairing old versus buying new. He taught him a man is as good as his word, and nothing sells quite like word of mouth.

The Making of a Man
When you take these qualities, add in a little country and his motherãs piercing eyes, you get a glimpse of the man I married. And while he picked up a few traits I wish heãd left back in the 70s and 80s and has the ability to drive me crazy faster than any 12 people combined, he is still my husband and I love him. This week is his birthday, and I would like to thank all the people that helped mold him into the man he is today. We, his wife and children, are very grateful!

Get more Kids on the HomesteadãUncensored: