Rebeka Halbert of the Texas-based Halbert Farm tells us all about the benefits of living with a sounder of Kunekune pigs. 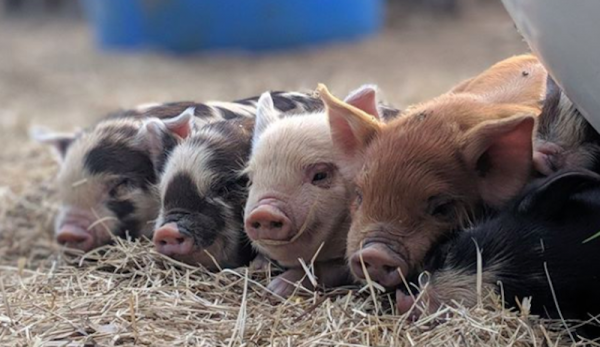 Halbert Farm is a 10-acre venture situated in Burleson, Texas, that has a focus on eye-catching Kunekune pigs.

“I have always wanted a farm since I was a young kid,” recalls founder Rebeka Halbert, who documents the farm’s daily goings on via social media and a live camera feed of the pig pen. “I can vividly remember drawing pictures of exactly how my farm was going to be laid out and what animals I was going to have.”

We spoke to Halbert about the appeal of Kunekune pigs and the rewarding nature of homesteading. We also got the scoop on the property’s house pig, Ripley.

Getting to Know Kunekune Pigs

Happy Early Sunday! We have a piglet surprise coming this afternoon! We got another new little boar, he just turned 8 weeks old and we named him Pike. Stay tuned for pictures this afternoon!

“I was never a pig person. But when researching animals for our 10-acre farm, I found these grazing pigs that are known for being able to fatten on pasture alone,” says Halbert. Recapping where her interest in Kunekune pigs originated from, she says, “I thought that sounded too good to be true but kept looking into it.”

After securing her first couple of pigs from Liberty Farms in Louisiana, Halbert says she “fell in love with the breed.”

Read more:Here are 5 pig breeds to consider for your hobby farm.

Nugget and Clover sitting so good waiting for their @justbluetreats watermelon cookie! They are the best sister pigs. ŌüĀ ŌüĀ I have my horse lesson this morning so we are up early getting ready and then hopefully will have a relaxing Sunday. Hope everyone has a great Sunday too!

On a daily basis, Halbert says her Kunekune pigs are “so friendly and easy to care for.”

She adds that they are much cleaner to be around than she originally imagined.

“They are pretty lazy but do go out to graze daily and have been very gentle on the land,” Halbert adds. “Kunekunes stay small. I like to keep mine around 200 pounds. They do not get territorial or aggressive like other pigs.

“And we started doing Airbnb animal experiences with the pigs because they are so friendly and love attention.”

If you follow Halbert Farm’s social media accounts, you’ll notice a star pig by the name of Ripley. As it turns out, Ripley is the Halbert’s house pig.

“Ripley was stepped on by her mom when she was born and we had to hand-raise her,” says Halbert. “She decided from 2 weeks old that she lived in the house. She would scream if we walked near the back door to make her go outside to go potty. As soon as she was done, she would jump back through the doggy door to get back inside the house.”

Halbert adds that Ripley “likes being clean and taking showers, loves getting her hair conditioned after her bath, loves being spoiled and pampered, and she gets massages all the time with one of those massage guns.”

Panda enjoying the sprinkle pool! ŌüĀ ŌüĀ Looks like its still $15.99 at Amazon. I put a link in my link.tree in my bio if anyone is interestedŌüĀ

When it comes to the personalities of the pigs on her farm, Halbert says that each and every one is a true individual: Clover loves to talk; Panda (pictured above) enjoys singing to her babies; and Corbin is proud of his “strange little oink.”

The Joys of Pig Farming

I love having all my piglets in a row. ?

“The most rewarding thing about running a farm is seeing how happy the animals are and the joy that they bring to people,” says Halbert. “When I first started doing the Airbnb animal experiences I didnŌĆÖt think anyone would sign up. Who in their right mind would want to pay to cuddle with Kunekune pigs?

“I also had just got a DSLR camera and decided I would take pictures for our guests. Never in my wildest dreams would I have thought I would capture the look of pure joy on so many peoples’ faces.”