We check in with Franchesca Duval from the humane Northern California farm and find out why quail can be a perfect addition to your homestead. 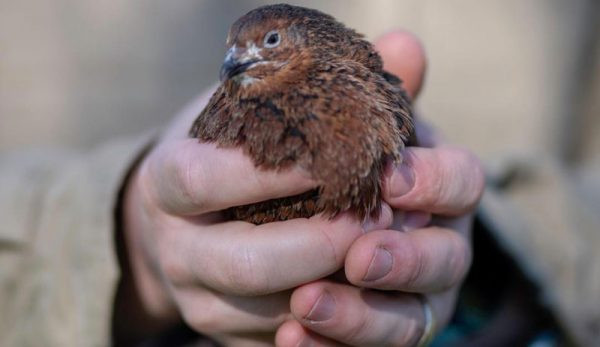 When Franchesca and Ryan Duval decided to start Alchemist Farm, they took a deep commitment to the humane breeding and hatching of their chickens, along with pledging to run the farm on totally renewable energy.

“We choose the name Alchemist Farm because we are always turning one thing into another around here,” says Franchesca, who’s based in Northern California. “Soil turns to grass. Grass turns to food for the chickens. Food turns to eggs. Eggs turn to chicks. Chicks turn to chickens. Chickens leave fertilizer for the pasture, and the whole beautiful circle begins again.”

As the Alchemist Farm circle has also expanded to include some eye-catching quail that star on the venture’s Instagram account, we spoke to Franchesca about living with quail, the fast-paced way they embrace the world around them, and why you might want to consider adding some to your own backyard.

The Difference Between Chickens and Quail

?Week of Quail? . This week we are sharing info on quail keeping in a three part miniseries here on our feed. Not a lot is shared on the web about small scale quail keeping so we are helping get the word out about these amazing little birds for those interested! ? Everything we have learned has been through trial and error. The best solutions and answers came when we sat down and just listened while watching the birds. With an open heart I would ask ŌĆ£what are you all needing here? What will make you most happy?ŌĆØ A happy quail is a prolific quail. Prolific quail make for happy quail keepers. Nature has all the answers, all we must do is listen. ŌØż’ĖÅ ? Pictured here are Pharoh coturnix quail. They are fully grown and are modeling the difference in feathering for males and females. Males have a rusty red breast (left) and females have a speckled lighter chest (right). This breed lays the brown speckled/malt ball marbled eggs ?.

“Quail have a completely different emotional profile than chickens in that they are prey animals,” says Franchesca, when asked about how the birds differ from Alchemist Farm’s chickens. “Quail become quite fearful if they are out in the open and prefer to dart from one brush-covered area to another. They do not have the roosting instinct [like chickens] and sleep on the ground.”

How to House Quail

?Faster Than Fast? . Everything about the life of a quail is fast. Upon hatching they are a completely different bird than chicken chicks. Chicken chicks will stagger around a bit while they get their legs under them. Quail chicks stand up and take off at a speedy run. ? The chicks are so fast that after hatching I do not open the hatching lid until I have it set down inside of the brooder so when their little motor legs launch them up and over the side of the hatching trey they safely plop into shavings as opposed to running right off of a counter! ? Each week a quail grows remarkably fast and by 8 weeks they are fully grown and ready to start laying eggs or be processed for meat (if you are wanting to #closetheloop on your protein sources). ? No matter how well we keep them they seem to naturally pass away after 2 years. I believe it is because they come into the world swiftly and are designed to come out of it swiftly. They hatch out in large numbers in the wild and are an important part of the natural food chain for animals higher up. A 2 year old quail is something that I do not believe exists in the wild, a one year old quail would be a great grandfather quail for sure! ? The baby quail in this photo are fresh hatchlings and there is nothing softer then gently moving your hand about them. They are smooth as silk! ŌØż’ĖÅ

Franchesca says that at first the little birds were housed in large tractorsŌĆöthat setup, however, made them miserable. Now they happily reside in both a sizable walk-in aviary packed with brush for them to hide in and a smaller, rabbit hutch-styled enclosure.

“I believe that the most humane treatment of any animal is to give it what it instinctively wants while keeping it safe,” she says. “For chickens it is lots of space and a safe coop at night. For quail, it is a smaller, womb-like space where they can hunker down and dust bathe in peace.”

?Perfect Design? . Every Monday during our hatching season we open our hatchers and sort/count the weeks fluffy chicks. After the chicks have been carefully moved from the hatcher we inspect the eggs that have not hatched to see if any chicks are still making a late entrance into the world. ? This chick was quietly sitting in its shell, looking around at the world around it. It was pausing before making its final pushes to get out of the only home it has ever known. ? We know they the chicks are quite snug in their eggs but this visual was a stunning reminder of natureŌĆÖs perfect design. There is not a millimeter of extra space inside a chickens egg. The chicks grow to fill the space and then carefully, oh so carefully peck their way out. ? Nature only takes what it needs, and uses its spaces and resources wisely. It is a powerful example for us humans to follow. ŌØż’ĖÅ

“Hatching quail is one of the most enjoyable parts of keeping them,” says Franchesca. “Unlike chicken chicks, which take a few days to fully get their balance and legs under them, quail are ready for action on day one: As soon as a quail pops out of the egg, they take off running!”

It’s normal for the first hatched birds to run around jostling the eggs of its brothers and sistersŌĆöand if you listen closely, you can even hear the unhatched chicks responding!

“Everything about quail is fast,” Franchesca adds. “From the moment they hatch to the mere six weeks it takes for females to reach maturity and begin laying. They come into and out of the world fast because, in the wild, they are an important part of our ecosystem, feeding many large animals higher in the food chain above them.”

?Quail Eggs? . Quail are SO prolific! They lay 5-6 eggs a week without fail and begin to do so at just 8 weeks of age which is lightning fast in the world of poultry. ? Did you know that whatever pattern of bloom a quail hen lays on her eggs is the pattern she creates her whole life? It may not be in the exact same place on the egg from a given day to another but it is always in the same theme. Big dots, gentle speckles or even swirls that look like smoke. ? Nature never ceases to amaze us here on the farm. It inspires us, beckons us to come outside and interact with it, care for it, and conserve it. ? ? WhatŌĆÖs your quail egg color fancy? Blue or brown speckled? ?

Quail eggs are total eye candy. You might find eggs in a rustic brown color with speckled patterns; you’ll encounter others in a pastoral shade of blue. Franchesca adds that the blue eggs include a raised texture, while the browns are totally smooth.

“A little-known fact about quail is that they will lay the same pattern on their eggs everyday,” she reveals. “The large speckles or splatters of color may be in different places, but you will always know which one laid a specific egg if you are paying attention.”

?Itty Bitty? . Just how small are quail when they first hatch? ŌśØ’ĖÅThis small! ŌśØ’ĖÅ. ? As I look upon them as they first encounter the world outside of the egg I am filled with gratitude. I see each animal on our farm as an ally in the journey of life. Each animal, no matter how small or large works along side of us to produce what it can as it is cared for with love. ? Fun fact, when I was quite young I decided I wanted to be a quail farmer. I had this grand vision of acres and acres of quail that I would herd from one area to another with a Vespa ?. These days I understand that there is nothing about that scenario that would make quail content but the point is, a dream was dreamed and now the heart of it is realized. Every dream we have holds elements of the possibility of our futures. Where we put our energy and intention leads us closer or further from realizing those dreams. ? Alchemist recipe for success: One Cup of Dream big! Two Cups of Prayer One Cup of working hard 3 Tablespoons humor 1 1/2 Cups of good friends to support you A dash of good luck ŌØż’ĖÅ Happy Friday everyone ?

If you’ve toyed with the idea of introducing backyard chickens to your property but aren’t sure you have enough space, Franchesca recommends considering quail.

“They are excellent choices for people in urban settings and small backyards who want to raise their own eggs because they lay as many eggs as chickens and require very little space,” she says. “Whether your farm is a raised urban bed or hundreds of acres, quail will be a lovely addition to your life. They give back so much and begin laying eggs faster than any other domestic bird in the poultry world.

“Give them a whirl, you will be happy you did!”