Meet the Alpha Hen: Every Flock Has One

Regardless of whether a rooster is present, a single hen sits atop the female pecking order. Here's how the behavior and balance of an alpha hen play out. 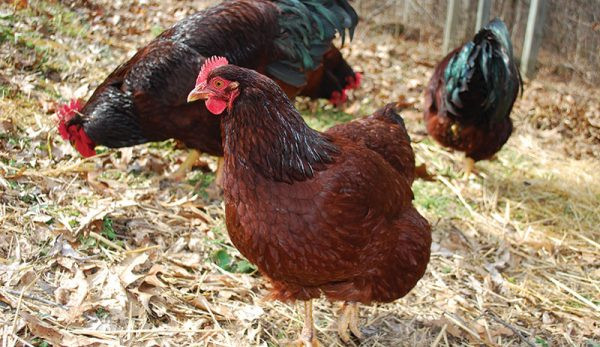 From her earliest days as a chick, Joan was different and just a tadâ€”well, more than a tadâ€”bossy and aggressive. When my wife Elaine and I would place feed in the brooder where we kept our heritage Rhode Island Red chicks, Joan would charge forward with the little cockerels to eat first.

As Joan grew older, she took to rushing her female flock mates, much in the same way the little cockerels would charge at each other and engage in mock battles. By the time she was 12 weeks old, Joan was the undisputed female leader of the flock. It was around that time that this pullet received her name.

We name all our chickens, and Elaine is in charge of giving appellations to the hens, usually picking some sort of television or movie theme. In the television series Mad Men, which is set at an advertising agency in 1960s New York City, Joan is the undisputed head of the secretaries. Tall, busty and red-headed, no female in the firm dares to mess with her or question her regal demeanor â€¦ and the males walk lightly around her, too.

Like the fictional Joan, our Joan (in the photo above) is towering, buxom and mahogany-colored, flaunting the reddish brown feathers that purebred Reds do. The two subordinate hens, Peggy and Trudyâ€”also named after Mad Men femalesâ€”long ago gave up challenging Joanâ€™s alpha status. Even the flock rooster Don, named after the notorious lothario Don Draper in Mad Men, shows proper deference to her and has done so since he and the rest of these birds were chicks together. In other words, Don doesnâ€™t intervene when Joan hands out alpha-style justice to her subordinates.

And by no means is our Don (shown below with Joan and Daisy) a wimp. Twice Don has stood his ground against a red-tailed hawk, and he has vanquished every rooster that has entered his 3-year-old life. But when Joan runs off other hens when some treat is tossed into the run, Don is quite content to let her have her way.

Of course, flock membership changes over time, and such was the case a year ago. In the adjacent run, Mary, Edith, Violet and Daisy (all named after characters from the television series Downton Abbey) were leading normal chicken lives with their fellow 1-year-old flock mate Al, as in alpha rooster. Daisy, despite her lowly status as a maid in the television show, ruled her fellow females with the proverbial iron beak.

One day, this was explicitly shown when the beta hen, Mary, spent a little too much time in the hensâ€™ favorite nesting box. Daisy entered the henhouse and imperiously sat on Maryâ€™s head causing the latter to wail in agony. And, predictably, Mary did yield the nesting box.

Later, Mary became broody, and when her eggs were about to hatch, Elaine and I knew that Mary would never be able to fend off Daisyâ€™s potential attacks on her and, more importantly, her chicks. So we moved Daisy, Edith and Violet to the adjoining run.

Don, of course, welcomed the new hens, quickly mating with all of them on their initial morning as part of his enlarged flock. Joan, however, immediately declared war, thrashing them with her wings, chest bumping them and generally making their lives miserable. Indeed, nearly a week passed before Daisy accepted her new role as the flockâ€™s beta, bumping Trudy and Peggy down the pecking order in the process.

None of this alpha hen behavior is a surprise to Carrie Shinsky of Meyer Hatchery in Polk, Ohio. â€śThe hen at the top of the pecking order is going to claim the choice roosting spot in the henhouse, the favorite nesting box will be regarded as her own, and she will always eat first at the feeder,â€ť Shinsky says. â€śAny hen who disagrees will get a peck on the head at the very least.â€ť

If a rooster is present, what does he have to say about all this? Basically, Shinsky says, â€śvery little.â€ť

â€śSome roosters are literally hen-pecked, and the hens will even gang up on him and torment him,â€ť she says. â€śBut even a dominant rooster doesnâ€™t usually interfere with the hensâ€™ pecking order. Iâ€™ve seen these same alpha roosters charge humans that have picked up their hens, even if the humans were acting in a nonthreatening way. And nobody, humans or roosters, is going to mess with a broody hen, especially a broody alpha hen.â€ť

The largest or oldest hen is often the alpha hen, but Shinsky emphasizes that such is definitely not always true.

â€śBecoming an alpha hen can be more of an attitude thing than a size related one,â€ť she says. â€śI have a 1-year-old Welsummer hen who is the alpha in a flock of much larger and older Brahma hens. The Brahmas donâ€™t seem to have any interest in being in charge of anything, but that little Welsummer is all about watching for danger and being the boss.

â€śSome breeds seem to be predisposed to fiercely want to be alphas. For example, many bantam breeds have that streak in them, and definitely seem to indicate that size doesnâ€™t matter to them. In our large mixed flocks in the grower houses, it tends to be the more commercial-line Golden Buff [which have Rhode Island Red and Leghorn in them] that has a dominant personality over other breeds. We will normally house them only with other larger bodied birds with similar growth patterns that can compete with them, such as Barred Rocks, Rhode Island Reds and Australorps.â€ť

I agree with Shinsky that roosters generally donâ€™t seem to interfere with hen intrigue. I can recall only one time where a rooster became embroiled in a hen squabble. The battle for supremacy between two wanna-be alphas had simmered for a fortnight when our rooster at the time broke up a battle between the two combatants. He merely charged both of them until the duo was more interested in avoiding him than fighting each other.

Although some domineering behaviors of the alpha hen are the same with or without a rooster, there are roles she will undertake if no cock is part of the flock. For example, when Elaine and I have raised all-female flocks, we have observed the alphas taking on the traditional rooster role of watching for danger. These hens fed sparingly when they were outside the coop confines, often searching the skies for danger as well as the woods that surround our two chicken runs.

â€śIâ€™ve seen alpha hens do most of the watching,â€ť Shinsky says. â€śBut Iâ€™ve also seen the hens, almost, it seems, instinctively, take turns watching for predatorsâ€”as in one hen watching for a while and then starting to eat when a different hen stops eating and begins watching. Iâ€™ve seen cows in a pasture do the same rotational-type thing.â€ť

Indeed, Iâ€™ve observed wild turkeys perform this same rotational observation behavior. After all, chickens and turkeys are closely related as both are gallinaceous birds and in the same family as partridges and pheasants. Iâ€™ve also witnessed roosters and hens emitting the alarm note, as has Shinsky, when some aerial or earthbound predator appears.

Although itâ€™s often the dominant rooster or alpha hen that performs most of the vigilant duties, they arenâ€™t necessarily the ones that will emit the high-pitched scream that indicates a predator is on the prowl.

â€śThe chicken who sees the predator first is the one that will make the alarm note,â€ť Shinsky says. â€śThere will probably be a difference in volume and tone between that of a roosterâ€™s and a henâ€™s alarm note, but it will be no mistaking the sound as a sign of distress. Interestingly, there seems to be slight differences in the screams emitted for a predator from above vs. a four-legged one.â€ť

Those subtle differences in sounds mayâ€”or may notâ€”be the triggers to cause chickens to run for cover or flatten themselves to the groundâ€”two common responses to an alarm note. Of course, some rooster-related behaviors do not interest hens in the least.

â€śI canâ€™t recall ever having heard an alpha hen give the food cluck so that the other birds could come in and eat some treat,â€ť Shinsky says. â€śThe alphaâ€™s attitude is basically that [she] wants that food all for [herself].â€ť

Shinsky adds that mother hens often give the food cluck to their offspring. But, obviously, the dynamic between mother hens and their chicks is different than that between an alpha and her subordinates.

No dictator, rooster or alpha hen reigns supreme forever, and inevitably, some upstart challenges the boss hen as well. â€śThe first aggressive act might be the challenger sneaking into feed before the alpha does,â€ť Shinsky says. â€śBut one of the best indicators that the pecking order might be on the verge of changing is when two hens begin doing the eye stare. Theyâ€™ll puff up their neck feathers and lock eyes. The chicken that breaks off her staring first is the loser. Thatâ€™s her way of indicating that she has submitted.

â€śEye staring is such an important dominance related issue with chickens that I wonâ€™t even make eye contact with breeds or individuals that are high strung. Iâ€™ll just make my way through a run without looking directly at any of them.â€ť

One of the profound joys of raising chickens is observing and learning more about why they behave and interact the way they do. The role of the alpha hen, with or without a rooster, certainly qualifies as a fascinating aspect of chicken behavior.

This story originally appeared in the January/February 2019 issue of ChickensÂ magazine.