At dawn last Friday morning when Tank and Uzzi and I woke up, we heard a weird humming outside in the air. Something kept going ping! against the side of our Port-a-Hut, too. 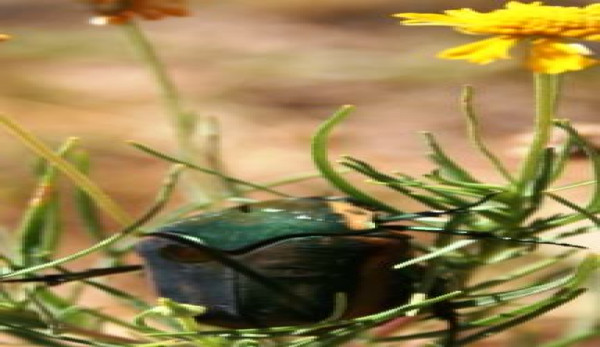 At dawn last Friday morning when Tank and Uzzi and I woke up, we heard a weird humming outside in the air. Something kept going ping! against the side of our Port-a-Hut, too.

What could it be? Tank is the new guy, so we made him look.

He slo-o-owly stuck his face out the doorway and whap! a big green beetle slammed into his nose!

Thatâ€™s when we realized itâ€™s Green Beetle Moon on our farm. Thatâ€™s what Mom calls the month of July. This is when Green June Beetles hatch by the thousands.

Theyâ€™re everywhere. Theyâ€™re kind of cool but enough is enough!

Green June Beetles are one inch long and a pretty, velvety green color with rust-colored stripes on their wing covers. They hatch in waves and waves until the air hums with their buzzing.

Males fly in zigzag fashion waist-high (or goat-nose-high, eeyeck!) seeking females all day long. When they tumble into our water buckets (and they do it all the time), Mom fishes them out so they donâ€™t drown. She squeaks because their strong legs grab her fingers and hold on tight until she flings them away.

Last night me â€˜n’ Uzzi Googled beetles (Tank watched; heâ€™s computer-illiterate, poor guy). Get this: about 40 percentÂ of all described insect species are beetles, about 1 million beetle species strong! Theyâ€™ve been around forever; a fossil beetle found in 2009 in Illinois dates to 318 to 299 million years ago.

The Ancient Egyptians revered beetles that they called kheper and we call scarabs. Kheper were dung beetles just like I bet you have on your farm. Dung beetles take away poop so they can lay their eggs in it.

Hereâ€™s a beetle fact you can use to dazzle your friends: African dung beetles can clean up a 75-pound mountain of elephant dung in just 30 minutes flat.

Cow poop doesnâ€™t stand a chance with dung beetles around; theyâ€™re the wee, jolly janitors of the insect world!