Kristyn Mader from the New Mexico-based farm tells us how she and her daughter created the trending #TubbyChickenTuesdays hashtag. 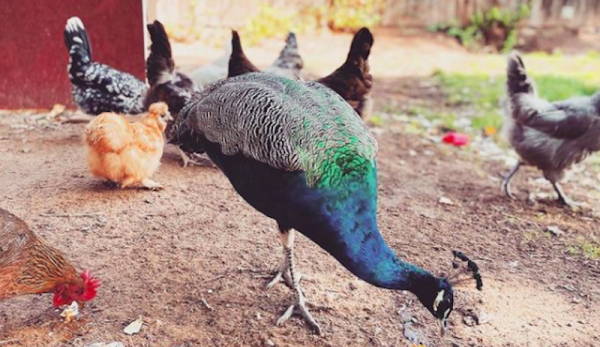 Kristyn Mader is a proud egg-slinger who presides over a fine troop of chickens, ducks, rabbits and peafowl at Mader’s Coop in Corrales, New Mexico.

“I grew up with chickens as a child,” recalls Mader, whose family farm also featured geese, horses and goats. “Any time I would have a bad day I would go sit in my favorite spot that I carved out of the haystack.

“I would sit there and watch the chickens, talk to them, hold them and instantly feel better. Ever since my childhood I have longed to have a farm again.”

Taking a moment out from running her own Mader’s Coop farm, we spoke to Mader about the dynamics of raising peafowl and the mischievous nature of Silkie chickens. We also got the story behind the popular Tubby Chickens Tuesdays social media hashtag.

Getting to Understand Peafowl

Along with chickens and ducks, peafowl play a crucial role at Mader’s Coop. Generally describing their personality as being “docile and very timid,” Mader says that one of her adult male peafowl is an exception to the rule.

“I hand-raised James, and he is different,” she explains. “James loves to be scratched and petted. Heâ€™s very tame, curious and affectionate. James is very special to me.”

When it comes to the way the peafowl at Mader’s Coop interact with other animals at the farm, Mader says that she mostly keeps them separated.

Well, with the exception of James.

“He free ranges with the chickens and ducks from time to time, and they all get along very well,” she says. “James loves to show off for the hens. My rooster doesnâ€™t dare challenge him. I think he knows he wouldnâ€™t win that battle!”

Beyond James, the rest of the peafowl at Mader’s Coop dwell in a large enclosure, in part to ensure that a sense of wanderlust doesn’t kick in and tempt them to fly away.

Mader highlights a tiny Silkie chicken named Bugsy as being among the most mischievous of animals at Mader’s Coop. “Sheâ€™s the smallest chicken in the flock and has the biggest attitude!” she says. “Bugsy will challenge any animal big or smallâ€”no peacock, duck or rabbit can scare her!”

In terms of Bugsy’s attack tactics, it seems she favors sneaking up behind her victims in order to steal their snacks. “If they even attempt to chase her, she will turn around and go after them,” says Mader. “They run away every time. Itâ€™s hilarious!”

“My daughter and I love chubby chickens!” says Mader as she breaks down the origin of the series. “The fatter, the cuter in our book!”

Mader says that originally she wanted to create a hashtag that enabled people to showcase their “adorably plump chickens”â€”and that Tubby Chicken Tuesdays “just stuck.”

Read more: These 5 nutrients are essential for your flock’s health.

The Anatomy of a Tubby Chicken

Detailing the sort of attributes that the ideal tubby chicken possesses, Mader says that they would “be the largest in the flock, usually the last one to leave the food bowl and the one that eats up every last crumb off the ground.” She adds, “They usually wobble when they walk and have no problem running over any hen for a piece of bread.”