Meet The Folks Behind The Beloved Cabin, A Sustainable Tiny House

John and Fin Kernohan tell us about living in an off-grid, 304-square-foot tiny house (with a greenhouse bathhouse!) on their Georgia-based property. 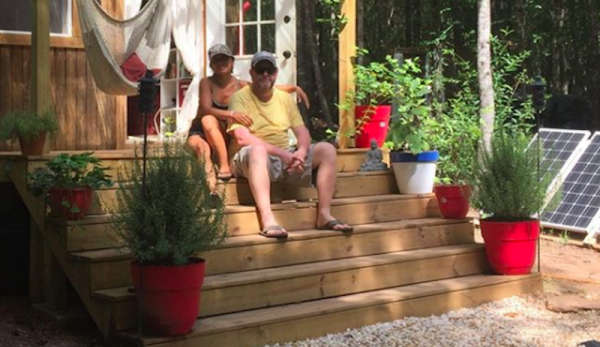 When John and Fin Kernohan decided to get married, they talked about where they’d like to live and what sort of fulfillment they wanted to get from their homestead. At the time, John was living in Miami in a 2,500 square foot house. But Fin told him plainly that she’d prefer a smaller and altogether cozier space.

After talking through some options, the Kernohans decided to settle on a tiny cabin in the woods in Georgia and take steps to live off-grid.

“For the past eight-and-a-half years we’ve been living in our DIY 304 square food foundation-based tiny cabin,” says John. They named the property the Beloved Cabin.

Since moving to a tiny house, the Kernohans have expanded their lot of land from three acres to 16 acres. They also added a smaller towable tiny home, which they dub the Tiny Firehouse: Station No. 9. They’ve also set up an advocacy and support group called the United Tiny House Association. John says this has “been able to donate over $675,000” from charitable festivals and events.

We spoke to John about the benefits of small-space living and the importance of sustainability. We also got the scoop on the couple’s greenhouse bathhouse.

Here are 4 sustainable ideas for your next interior design project!

Embracing sustainable practices has always been an important part of the Kernohans’ world view. “We began with small steps,” recalls John. “Solar to solve our energy requirements and water were our two main priorities when we got started.”

These days, the Beloved Cabin’s solar energy system generates all of the property’s power needs. Two creeks and natural springs on the land help provide water, along with a well that now pipes to the cabin and gardens.

The Beloved Cabin also utilizes a HomeBiogas system to create methane gas for cooking fuel. This in turn produces nutrient-rich liquid fertilizer as a by-product.

Live like you’re growing HUGE #veggies… Embrace the excitement every day can bring… like the feeling of discovering a monster-sized zucchini overlooked in one of our gardens here at #belovedcabin ! ❤️ Well done Baby! ?

“We started out with a small 8-by-12 garden box, which has now expanded to six different garden areas and multiple fruit trees,” explains John. “We grow an amazing amount of vegetables, peaches, apples, grapes and berries.

Humanure is what you think it is—and it may be time to rethink the taboo.

The Benefits of Gray Water

Relaxing time at @belovedcabin ? ▪️▪️▪️▪️ We’re clawfoot tub fans… we have 3 in total and absolutely love them. ❤️ ▪️▪️▪️▪️ There is something about a clawfoot tub that makes you feel classy and cozy at the same time!

John says that watering the Beloved Cabin’s plants with “gray water” has also become a staple practice on their land.

“We ran the drainpipe from the clawfoot bathtub located in our greenhouse and bathhouse out to one of our garden boxes,” he says. “We use non-detergent castile-based soap and shampoo so that the gray water from our bathing is perfectly safe and beneficial for our berries and veggies.”

Summer at @belovedcabin ??? our indoor plants are thriving ?… ————— This greenhouse-bathroom also becomes our kittens playground/nursery ? those 2 monsters enjoy hanging on the plants and sleeping on the pots!! “You’re killing my plants Kittens!!”?

One of the most distinctive and innovative features of the Beloved Cabin is the property’s greenhouse bathroom. “Fin has wanted a greenhouse and bathhouse for years,” explains John. “She has talked about and designed and redesigned it multiple times over the years.”

Building the facility out of repurposed windows, the Beloved Cabin’s greenhouse bathroom means that growing season can begin far earlier than usual.

“An added extra benefit of the greenhouse bathhouse is that through the process of passive solar heat, [during winter] it now heats the back of the cabin very nicely,” says John.

DIY sofas ? with storages. We got these 2 foldable mattresses from Amazon after the cats decided to pee on our reused/recycled camper mattresses we had for years!! ▪️▪️▪️▪️▪️

“Without getting up on the proverbial soapbox, we believe we all have an obligation to do what we can in our own way to extend resources and help in healing our abused and over-used planet,” says John when asked about the most rewarding part of a tiny house lifestyle. “By living our off-grid, repurposing, tiny lifestyle, it’s just our way of doing what we believe we can to help in preserving our planet for future generations.

“It’s like we always say: Do something big in your world by simply doing something tiny!”