Relatively easy to identify and a gourmand's dream on the dinner table, hollow-centered morels are definitely worth seeking out on the forest floor. 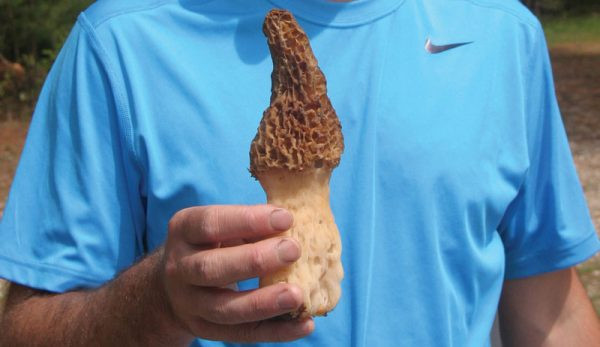 Not only does it have a meatier texture than most store-bought mushrooms, itâ€™s relatively easy for novices to learn to safely identify. As the mountain folks say: â€śIf itâ€™s hollow, you can swallow.â€ťÂ

Morels (Mochella deliciosa, M. esculenta, M. elata) somewhat resemble the outline of a cartoon Christmas tree: a fat stalk and a crinkly, conical cap. Cut a morel in half from top to bottom. Both the stalk and cap have enough of a void that you could stick one on every digit like so many finger puppets.

The hollow is also big enough to house a few insects, another reason to slice them open before cooking. But then again, there are some people who say that bugs are the next wave of foraging!

There are a few mushrooms that, with some enthusiastic wishful thinking, look enough like a morel to earn the name â€śfalse morels.â€ť But they are mostly solid inside with terrible potential as finger puppets.

Novices who find these should leave them be. They are either unappetizing or could play havoc with your digestion.

Read more: “The Beginner’s Guide to Mushrooms” goes in-depth on our favorite fungus.

Always cook morels. The heat denatures a toxin that would send you running to the toilet. In any event you donâ€™t want to eat mushrooms raw for three reasons.Â

So be a smart mushroom hunter. Cook morels and everything else you find for at least a few minutes in butter or fat and only eat a small amount of a new species your first time to learn if youâ€™re sensitive.

And even with all those precautions, experienced mushroom hunters can develop an allergy to morels decades after their first bite. Sometimesâ€”but not alwaysâ€”this is triggered by eating superhuman quantities of morels. So, donâ€™t be greedy.Â

Read more: Cut the shiitake! You can grow your own mushrooms.

When & Where to Look

Morels appear in mid-spring, usually after the last frost, but before the tree leaves come out. They seem to be triggered by a good rain about the time the soil temperature reaches 50 to 53 degrees.Â

Being a good morel hunter means being a good tree hunter. The submersed part of a morelâ€”its inedible, stringy myceliaâ€”grows in forest floors in collaboration mostly with mature tulip poplars, but also elms and ashes and among old apple trees in orchards. A dying elm tree can also spur its morels to fruit heavily before their primary food source is lost.

In the Midwest and Pacific Northwest, morels respond to the previous yearâ€™s forest fires with great flushes rising from blackened earth. Unfortunately, Southern morels havenâ€™t learned this trick. This makes them a bit more difficult to track down.Â

Chefs and farmers-market shoppers will pay $25 to $50 a pound for fresh or dried morels. If youâ€™ve ever had them in a stew, perhaps with venison and ramps, youâ€™d understand why.

If you have a surplus, putting them in a dehydrator overnight at about 110 degrees Fahrenheit will let you save them in a jar in your cupboard. Rehydrate for 10 to 20 minutes in warm water, milk, broth or wine before adding to a sautĂ© pan, soup or casserole.Â

Donâ€™t be discouraged if you donâ€™t find morels on your first foray. Most edible soil-borne mushrooms announce themselves across the forest floor like so many brightly colored periscopes of yellow, orange, red or blue.

But morels camouflage themselves quite well. They wear the brownish grays of fallen leaves, with their outline broken up by a shadowy honeycomb of craters in their caps.Â

My technique for finding morels? Like the commander of a luckless sub-chaser, I often stop in disappointment and disgust at being empty-handed even though Iâ€™m standing amongst massive tulip poplars. Then I look down at my feet.

Half the time, Iâ€™m standing in the middle of an under-the-radar fleet of morels. Then, I use my pocketknife to cut them off at soil level (no sense getting dirt in all those craters). I debate the various ways to cook them on the way home.Â

This article originally appeared in the “Wild Food Farmer” column in the March/April 2021 issue of Hobby Farms magazine.Â