Photo by Audrey Pavia Milagro got dressed up for the Norco Horseweek Parade. Every year in my town of Norco, Calif., we celebrate Horseweek. This is a week of fun equine events, kicked off by a Saturday-morning parade. Unlike the other parades held in Norco throughout the year, this one features only horses. Horses being […] 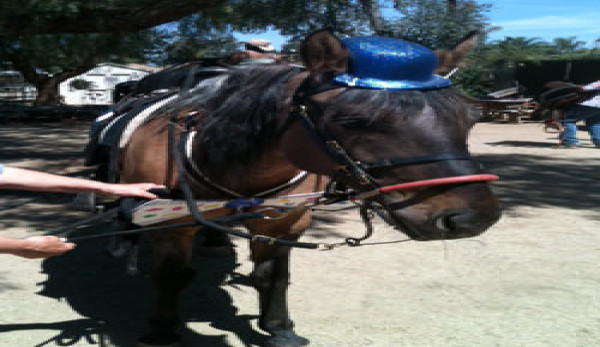 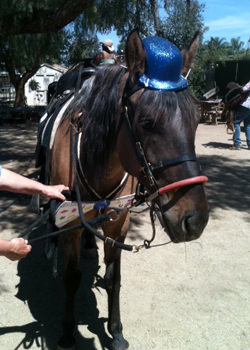 Milagro got dressed up for the Norco Horseweek Parade.

Every year in my town of Norco, Calif., we celebrate Horseweek. This is a week of fun equine events, kicked off by a Saturday-morning parade. Unlike the other parades held in Norco throughout the year, this one features only horses. Horses being ridden, horses being led, horses pulling carts. Itãs all about horses.

Whatãs great about this parade is that there are no motorized vehicles or marching bands, so itãs a lot less stressful for the horses. Years ago, I made this event Milagroãs first parade. He was fairly calm and seemed to enjoy walking down the main drag in town, with little kids waving at him from the curb.

Last Saturday, we walked in this parade once again, only this time, we had a costume. We were part of Moonshadow Farms exhibit, a boarding stable down the street from me that is owned by my friends Randy and Cathey. Because the theme of the parade was ãWhere City Meets Country,ã we decided to dress our horses up ãcity,ã while we, the riders, dressed ãcountry.ã

On the morning of the parade, I brought Milagro down to Moonshadow, where all the horses were being adorned with their garb. He stood patiently as I fitted the shimmering derby to his head, cutting out the sides to make room for his ears. He didnãt even flinch when I attached the giant bowtie to his breast collar. One of the other horses wanted nothing to do with this stuff, so I was particularly proud of my boy for being so tolerant.

After I finished dressing him up, I stood back and admired my work. I couldnãt help but notice that he looked a bit humiliated. I am anthropomorphizing? Perhaps. But he really did look embarrassed.

When the group of us walked down the parade route, the boys in their blue hats and the girls in their pink, Milagro was strangely relaxed. He usually gets a little jacked up at paradesãsometimes very jacked up if there are marching bands and cars honking. But this time, he was so calm I started to wonder if he was feeling all right.

Of course, he wasnãt sick, just calm. It did occur to me that he was too humilated by his costume to act up. After all, how cool would it look if he was dancing and prancing around with that dumb hat on his head and his giant bowtie flopping around? He probably just decided to blend into the background. If he didnãt call attention to himself, then maybe no one would see how silly he looked.

OK, thatãs probably not what was going on either, but it sure is fun to pretend.