An increasing number of veterans are using their skills to agricultural ends, and some are helping save endangered heritage breeds. 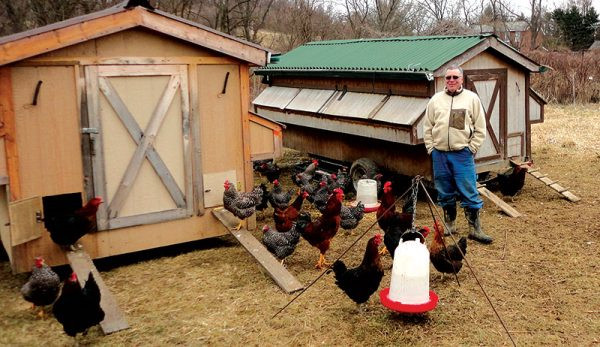 Heritage breed chickens were never part of the plan for Roger Clawson (pictured above). The Navy veteran was researching Scottish Highland cattle for the 6-acre homestead he purchased in New Salem, Pennsylvania, when he found a list of threatened species listed online by The Livestock Conservancy. It‚Äôs an organization dedicated to protecting endangered livestock and poultry breeds from extinction. Upon learning poultry breeds such as Plymouth Rock, Rhode Island Red, Nankin and Spanish, were in trouble, he decided to add a flock to his farm.

‚ÄúHeritage breeds are more interesting [and] hardier, than industrial breeds,‚Äù Clawson says. ‚ÄúI had selfish reasons, too: Heritage breeds taste better than the [chickens] sold in the supermarket.‚Äù

Clawson wanted to start with 100 chickens, but his wife, Lorraine, wanted to keep their flock to 25. The pair compromised and added 50 Plymouth Rock hens to their RedRange Farm in 2013. Not long afterward, he expanded the flock again, adding nonindustrial Rhode Island Red hens‚Äîas well as Karakul sheep, Spanish goats and Silver Appleyard ducks, also heritage breeds‚Äîto meet the demand for eggs and pasture-raised meat.

By raising heritage breeds, Clawson is building a farm business, as well as helping restore breeds that might otherwise disappear. ‚ÄúIt‚Äôs critical for us to save these breeds,‚Äù he says.

A growing number of the 20.9 million veterans in the U.S. are pursuing farming after their military service ends. Raising crops and livestock requires traits people learn in the service, including planning, perseverance and willingness to adapt to change.

Several organizations, including the Farmer Veteran Coalition, which has seen membership numbers increase from 1,195 in 2013 to 10,263 in 2016, have stepped up to help veterans from the Army, Navy, Marine Corps, Air Force, Coast Guard and National Guard transition into agriculture.

It was interest from veterans that led The Livestock Conservancy to launch Service to Stewardship in 2012. These workshops combine classroom learning with hands-on activities to cover sustainable agriculture topics including choosing the right animals, rotational grazing, working with processors and farm marketing. Executive Director Alison Martin sees the increased interest in farming as a way to address the pressing need to restore heritage breed livestock.

‚ÄúVeterans have a strong interest in getting into farming in a different way, not going into commercial-scale agriculture,‚Äù she says. ‚ÄúHeritage breeds have genetic diversity we don‚Äôt find in commercial poultry, and if we don‚Äôt save them, we‚Äôll lose that completely.‚Äù

Heritage breeds‚Äîthe traditional breeds raised generations ago‚Äîhave traits that make them well-suited to sustainable agriculture such as foraging, fertility, maternal instincts and natural disease-resistance. As industrial agriculture went mainstream, these breeds were overlooked in favor of fast-growing breeds that fared well in confinement. Several traditional breeds are at risk of disappearing.

Eleven chickens, including Crevecoeur, Nankin, Redcap and Sultan, are considered critical by The Livestock Conservancy, while Houdan, Icelandic, Rhode Island White and Russian Orloff, are among the 11 breeds listed as threatened. Thanks to farmers, several heritage breeds, including Orpington and Wyandotte, once listed as endangered, have made a comeback.

‚ÄúFarmers and family flocks are the backbone of rare breed conservation,‚Äù Martin says. ‚ÄúChicken keeping has grown, and the number of small breeding flocks has grown, making more than 1‚ÅÑ4 of rare breeds more secure than they were 10 years ago.‚Äù

Chris Dorsey (pictured above) served as a reconnaissance specialist in the U.S. Army. He deployed to Iraq after 9/11 and returned to his hometown of Dahlonega, Georgia, with a diagnosis of post-traumatic stress disorder. In 2009, he started working in a commercial poultry processing plant, working up to plant manager. At the same time, he was raising Araucanas at home and would often sit in the pasture with his flock after work.

‚ÄúAt first, some of them were kind of flighty and skittish, so I had to build that relationship, and then it got to the point where I could go out there in the yard and sit down and the chickens would all come up and hang out,‚Äù he says.

Dorsey could sit out there for hours with them. ‚ÄúThey all have their own little personalities,‚Äù he says, ‚Äúand it just becomes a big happy family. If I‚Äôm having a bad day, I‚Äôd go out there with them and not have to really worry about whatever was bothering me.‚Äù

Dorsey is raising funds to use the 6-acre farm as a training site where fellow veterans can learn about farming with an emphasis on raising threatened breeds. In the meantime, he often gives veterans small flocks of heritage chickens to help start their farms.

‚ÄúFarming is a lot like being in combat,‚Äù he says. ‚ÄúYou have to adapt and overcome. You wake up in the morning, [and] you never know what you‚Äôre going to face: weather, pests, predators. You have to be on your toes.

‚ÄúIt keeps you active. One of the worst things for post-traumatic stress‚Äîor military service members in general‚Äîis just sitting there idle with nothing to do. We have to stay busy and, with a farm, you‚Äôre always busy.‚Äù

5 Heritage Breeds for Your Flock

If you‚Äôre looking to raise heritage chickens, consider adding these five breeds to your flock.

Despite the benefits, getting started can be a struggle. Martin believes the classroom lessons and hands-on experiences offered through Service to Stewardship provide essential skills to help veterans launch or expand their farms, but education is just one goal of the program.

‚ÄúWe want to make connections to other farmers who are also veterans,‚Äù she says. ‚ÄúThere is a sense of brotherhood and sisterhood among veterans, [and] figuring out together can be very powerful.‚Äù

Clawson believes that he has become a better farmer because of the connections he has made with other farming veterans since launching RedRange Farm. He believes Service to Stewardship is an ‚Äúamazing program‚Äù that makes the difficult path to farming a little easier.

‚ÄúVeterans are used to teamwork,‚Äù he says. ‚ÄúWe have a built-in support group when we have a question or problem or need an opportunity.‚Äù

Often, veterans turn to each other to help source heritage breeds that might not be available at feed stores or from mail order hatcheries. Connie Abeln served in the Army Reserve and the National Guard before she started raising heritage breed chickens in Kansas, Missouri. Abeln‚Äôs success with the endangered Crevecoeur breed led her to partner with The Livestock Conservancy to help bring it back. Her current flock of 230 includes Crevecoeur, Nan-kin, Houdan and Delaware chickens; she ships hatching eggs and hens to farms nationwide, but she has a soft spot for veterans raising heritage breeds. ‚ÄúFor a lot of us, farming provides a sense of purpose; it‚Äôs our reason to get up in the morning,‚Äù she says.

Martin estimates that about half the veterans who have participated in Service to Stewardship are raising heritage breeds. She adds that even flock keepers who buy day-old chicks are helping conserve rare breeds by creating a reliable market for breeders and hatcheries. For Dorsey, raising heritage breed chickens embodies another military value: Contributing to a greater good.

‚ÄúWhen you start teaching [veterans] about the different heritage breeds and the advantages of heritage breeds over production breeds, it just clicks with them,‚Äù Dorsey says. ‚ÄúSo, I think there‚Äôs a great relationship [between veterans and heritage breeds], and The Livestock Conservancy sees that. Focusing on heritage breeds gives you a purpose‚Äîto help veterans and save breeds that are disappearing‚Äîand that‚Äôs what we‚Äôre all searching for is that purpose.‚Äù