Photo by Judith Hausman Buttermilk pies are easy to make, and their simple flavors are deliciously comforting. Lisa had made a mistake in the cheese house, but like many a food mistake, a new product resulted. When her apprentice, Blair described the dense texture and tangy flavor of the goat milk, I knew I had […] 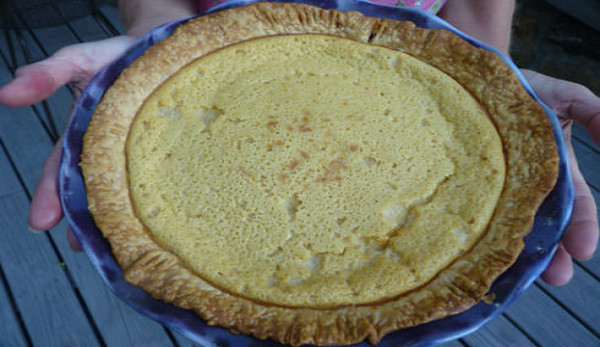 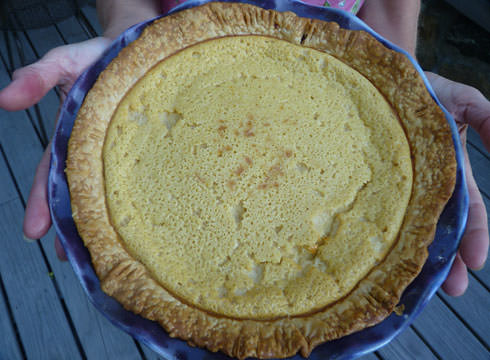 Buttermilk pies are easy to make, and their simple flavors are deliciously comforting.

Lisa had made a mistake in the cheese house, but like many a food mistake, a new product resulted. When her apprentice, Blair described the dense texture and tangy flavor of the goat milk, I knew I had to take home a quart to experiment with.

Although it was snowy white, we called the cultured goat milk â€śOobleck,â€ť from Dr. Seussâ€™ classic: Bartholomew and the Oobleck (Random House, 1949). Since it fell somewhere between yogurt and crĂ¨me fraiche, it seemed just right for my milk dessert recipes.

Milk desserts are so light and cooling for balmy nights â€” especially when accompanied by the gorgeous fruits of summer, such as the local peaches just now coming in.

The easiest milk dessert is more about assembling than cooking. Buy some really good peaches â€” the best you can find â€” and some whole-milk ricotta and local honey. Youâ€™ll also need some chopped almonds or pine nuts, as well as some vanilla.

Split open the peaches and carefully pry out the pits. Mix a teaspoon of vanilla into a cup of ricotta. Make peach and ricotta sandwiches, and roll their edges in the nuts. Once youâ€™ve assembled the peaches on a plate, drizzle them with the honey to taste, and youâ€™re done. Yum!

The second milk dessert requires just a little stovetop cooking and a few hours to chill. Panna cotta means â€ścooked cream,â€ť but this version has just a little cream, and the fat level of the dairy products can be dialed up and down according to taste. Itâ€™s essentially milk Jell-O, and though that sounds unappealing, itâ€™s actually delicious withÂ berries orÂ figs and should be made in advance.

I like to steep herbs, such asÂ sage or lavender, in the milk as it reaches scalding temperatures, but you can add a pinch of saffron instead. You can also substitute honey for sugar, too. The Oobleck worked perfectly in this favorite but so will any plain (cow milk) yogurt.

Whisk the gelatin into 1 1/4 cups of cold milk in a small pan. Then stir it as it softens and heat it over low heat until it dissolves. Do not boil. Stir in the rest of the milk, cream and sugar, stirring until the mix just scalds. Strain the mix into a bowl and whisk in the vanilla or orange flower water. Set aside until just warm; then stir in the yogurt. This makes one large panna cotta or six 4-ounce ramekins. Chill until it sets.

My last milk dessert, buttermilk pie, requires baking but is still very, very easy to make. Not to mention, the coconut version is spectacular.

I think of buttermilk pie as a Southern dish. Its comforting, simple flavors are the perfect underpinnings for bright blueberries or raspberries. The Oobleck had the right tang and texture for this dessert â€” though buttermilk or plain yogurt will work, too.

Start with your favorite homemade or store-bought pie crust, unbaked but prepped. For a deeper pie, make 1 1/2 times the recipe. I also like baking a custard-y pie by setting the pie dish in a larger pan, filled with water to halfway up the pie dish. This sets the custard more softly and tenderly.