Milking Devons, known as the first British cattle to come to America, are highly adaptable, milk and meat producers. 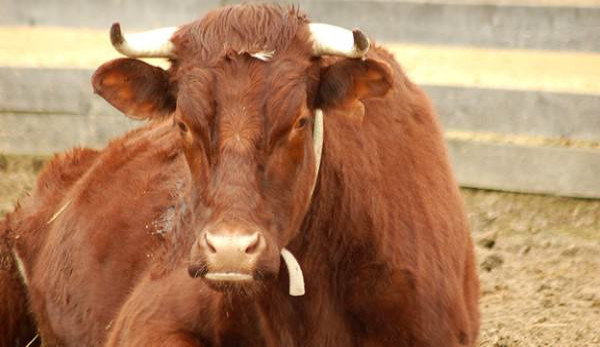 Use: Milking Devons are perfect all-around small-farm cattle. Cows give decent quantities of delicious, four percent butterfat milk (comparable in quantity and flavor to Jersey milk) ideally suited for crafting butter and cheese. Milking Devon steers are reasonably fast maturing and fatten easily, making them ideal for grass-fed and organic beef production. Milking Devons’ well-marbled beef is noted for its tenderness, juiciness, and flavor; most carcasses dress out at about 60 percent of live weight. And, Milking Devons are still a number one choice with oxen teamsters who prefer a lively, fast-walking yoke of working oxen.

History: There are three breeds of Devon (DEV-an) cattle: Milking Devons, beef Devons (called North Devons in their British homeland), and South Devons (known as the “orange elephants”, they’re the largest of all British breeds). Beef Devons are the modern version of the ancient Milking Devon, while South Devons are unrelated to the other two. Small, red cattle roamed the hills of southwest Britain beginning in ancient times; the Romans wrote about them as early as 55 B.C. Developed as triple-purpose draft, milk, and meat cattle, they were frequently carried by settlers to foreign lands; this was due to their own merits but also because the seaports of Devon and Cornwall were the last ports of call for sailing ships departing for Britain’s colonies abroad. In 1623 the British ship Charity brought “red cattle”, one bull and three heifers, to Edward Winslow, agent for Plymouth Colony, making Devons the first British cattle to set hoof on American soil. Cattle became an important source of wealth in the colony; the average cow sold for ÂŁ28 in 1638. So valuable were they that in 1627 Edward Winslow “sold unto Capt. Myles Standish his sixth share in the red cow”, indicating that one cow was often shared by several families. Devons remained triple-purpose cattle until 1952, when the American Devon Cattle Association decided to take the breed in a new direction. By selecting primarily for beef qualities they felt they could breed Devons that were longer, taller, and trimmer while accelerating their rate of maturity. One group, however, wanted to keep the ancient breed exactly as it was; in this manner the separate Milking Devon breed was formed.

Conformation: All Milking Devons are red. A deep, blood color described as ruby red is preferred (this is why fanciers call Devons the “Red Rubies”). Their muzzles are flesh-colored and they have slightly lighter colored patches of hair around their eyes; white on the tail switch, udder, or scrotum is allowed. The skin of Milking Devons is yellow-orange. Unless de-horned, Milking Devons have graceful, mid-length, waxy-colored horns with dark tips. Milking Devons are fine-boned, agile cattle–lithe and lovely, with neat, compact bodies and strong legs. They are thin-skinned. They have sleek summer coats that grow thicker and show a tendency toward curliness in the wintertime. Milking Devons are intermediate-sized cattle (larger than a Jersey but smaller than a Holstein); mature cows weigh 1000-1200 pounds, while bulls tip the scale at 1400-1700 pounds.

Special Considerations/Notes: Milking Devons thrive on rough forage that other livestock spurn. They are intelligent, easygoing, and with kind handling they develop wonderful personalities. Cows are outstanding mothers and calve well into their late teens. And, this highly adaptable breed is both heat and cold tolerant. According to the American Milking Devon Association there are only about 600 of these unique, triple-purpose cattle in the world. The Milking Devon exists only in North America; it’s been lost in its British homeland. Milking Devons are listed in the Critical category of the American Livestock Breeds Conservancy’s conservation watch list, making Milking Devons an ideal breed for potential hobby farm conservators seeking a unique, all-American breed for their small farms.