Miniature dairy goats can produce a lot of milk with lower space demands. Check out the mini-milking breeds that are perfect for small hobby farms! 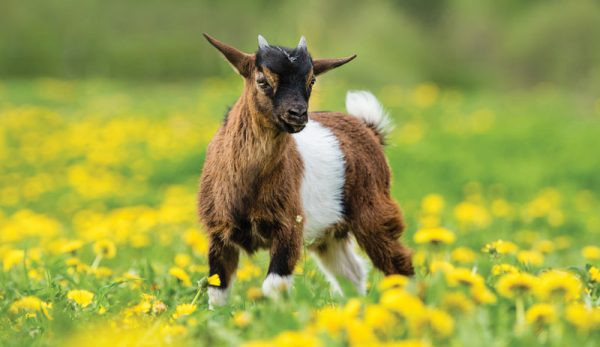 There are many reasons to love miniature dairy goats. These breeds produce about 2‚ĀĄ3 as much milk as a full-size dairy doe but on half the feed. You can house three or four minis in the space you‚Äôd need for one full-size goat. Because of their size, minis are easier to handle than their larger counterparts, making them ideal for children and adults with limited agility or strength.

Does come in a variety of sizes from 17-inch Pygmies to 29-inch Mini Alpines, Mini Saanens and Mini Nubians. Many city ordinances allow people to keep miniature goats where full-size goats aren‚Äôt allowed. They‚Äôre easy to transport in the back seat of a car or van or in a roomy dog crate in the bed of a truck.

Minis typically give birth to two to four kids, although five is fairly common. There is a strong market for miniature dairy goats, as well as for pets. It‚Äôs usually easy to find those kids great homes.

Some, such as Nigerian Dwarfs and Pygmies, are seasonal breeders, meaning they can be bred any time of the year. If you have more than one doe, you can stagger breedings and have milk on the table year round.

Virtually all of the mini-milker breeds are at least in part descended from West African Dwarf goats, known to the scientific community as WAD goats. Though their origin is uncertain, these small, hardy goats have thrived in sub-Saharan Africa for hundreds of years. They‚Äôre still valuable sources of milk and meat in parts of rural Africa.

To this day, they‚Äôre the most popular type of goat in 18 western and central African countries, due in part to their resistance to a disease called African Trypanosomiasis that, transmitted by tsetse flies, kills most livestock not native to sub-Saharan Africa. According to United Nations Food and Agriculture Organization figures, an estimated 11 million WAD goats are in Nigeria alone.

There are two types of WAD goats:¬†

The first WAD goats came to America in 1909. Further importations occurred between 1930 and 1966.

At first, all of these goats were referred to as Pygmy goats. However, some early breeders noticed that not all of these animals were extra short-legged, wide types. They called these more proportionally built goats Nigerian Dwarfs.¬†

If you like a specific breed of full-size dairy goat, scaled-down versions exist. You can also try √ľber-popular Nigerian Dwarfs. Pygmy goats don‚Äôt produce a lot of milk, but what they do is uncommonly tasty. The Kinder, with its Pygmy and Nubian goat background, is a dual-purpose (milk and meat) goat that is slightly larger than the other breeds.

Read more: Check out these tips for choosing the right dairy goats for your farm!

Oberhaslis were originally considered a type of Alpine goat, but they achieved status as a separate breed in the 1960s. Mini Oberhaslis are less common than most of the other mini-milker breeds.¬†

They‚Äôre sweet and friendly and nearly always chamoisee colored: a rich, red base coat with a black dorsal stripe, belly, udder and lower legs, and a nearly black head with white stripes on its sides.¬†

At the height of her lactation, an Oberhasli doe gives a gallon to 2 gallons of roughly 3 1/2 to 5 percent butterfat milk per day.

Most Nubians have loud, strident voices, and they ‚Äútalk‚ÄĚ a lot. This can make them less than ideal for anyone with nearby neighbors. They are very people-oriented, so if you want goats that dote on your attention, this is your breed.¬†

Nubians have sleek, silky summer coats and long, pendulous ears. Most have arched facial profiles like full-size Nubians, though this isn‚Äôt a requisite for registration. Does produce 2‚ĀĄ3 the amount of a full-size Nubian does, to the tune of about 2 quarts to a gallon per day. Their milk is sweet and tasty due to its 4 to 7 precent butterfat content.

Read more: Maximize the lactation cycle of your dairy goats with these 5 steps.

They‚Äôre often not much smaller than full-size Golden Guernseys. Their short to quite-long coats often sport long fringes of hair along their spines and ‚Äúpantaloons‚ÄĚ on their hindquarters.¬†

Mini Guernseys are always golden-colored, both hair and skin. They are unusually placid and friendly.

These miniature dairy goats don‚Äôt give a lot of milk, but they do so on grass alone, with no grain needed. Does typically produce 1 to 2 quarts of roughly 3 1/2 percent butterfat content per day.

Mini Alpines are hardy, alert, active and agile. These are graceful, medium-size goats that come in the six French-named color patterns seen in full-size Alpines. Mini Alpine does produce from 2 quarts to a gallon or more of roughly 4 to 6 percent butterfat content milk per day.¬†

Like their full-size counterparts, Mini Alpines sometimes milk through, meaning they needn‚Äôt be bred and produce kids to induce lactation every year. Instead, they can be milked year round.

Like their full-size counterparts, Mini Saanens produce a lot more milk than other breeds, but their butterfat content is lower. Saanens are always white or cream-colored with pink or olive-colored skin.¬†

Mini Sables are essentially Saanens of any other color than white or cream. The Miniature Dairy Goat Association registers Mini Sables in their Mini Saanen studbook, while The Miniature Goat Registry registers them in separate studbooks.¬†

Mini Saanens and Mini Sables are friendly, easy-going goats that give about 2 quarts to 3 gallons of 2 to 3 percent butterfat content milk per day. Both breeds often milk through.

The Nigerian Dwarf is the fastest growing dairy goat breed in North America and for good reason. It‚Äôs gentle, intelligent, colorful and productive.

At the height of their lactations, does produce 1 to 8 pounds (8 pounds equals roughly 1 gallon) of rich, 6 1/2 percent butterfat milk per day. And because breeders are selecting for larger, easily milked teats, milking dairy-quality does is a breeze.¬†

It‚Äôs important, however, to buy from producers breeding dairy-type goats. Some Nigerian Dwarfs are bred primarily to be pets. Nigerian Dwarfs have short-to-medium length coats and come in a stunning array of colors.¬†

Some have blue eyes, but brown is the norm. Most have horns unless they‚Äôre disbudded as kids. But polled (hornless) genetics are increasingly available, too.¬†

These medium-size minature dairy goats are heavier bodied than most other mini breeds. They‚Äôre noted for their sweet personalities and easy-going temperaments.¬†

Only gopher-eared bucks can be registered.

If you‚Äôre thinking of getting dairy goats, think small and do your homework before you buy. Chances are there is a mini-milker breed exactly right for you.¬†

The Kinder isn‚Äôt technically a mini milker, but it‚Äôs still a great nonfull-size option. This goat is a stocky-built, easily-handled, dual-purpose milk and meat breed initially produced by breeding registered Pygmy bucks to registered Nubian does. After that, Kinder-to-Kinder breeding is the norm.¬†

Does give 2 quarts to a full gallon of 5 to 7 percent butterfat content milk per day. Kinder kids grow rapidly, reaching roughly 70 percent of their adult weight by 1 year of age. Kinder carcass weight is about 60 percent live weight, making them
excellent meat goats, too.

Few people think of Pygmy goats as milk producers. But when milked, does give from 1 quart to 1‚ĀĄ2 gallon of 5 to 10 percent butterfat content milk that the National Pygmy Goat Association says is higher in calcium, phosphorus, potassium and iron than milk from full-size dairy breeds.

Pygmies are small, docile and intelligent. Besides producing milk they make great pets.

First-generation miniature dairy goats are produced by breeding a Nigerian Dwarf buck to a full-size registered dairy doe. Does from these breedings are usually bred to registered miniature bucks of the same breed.

Most breeds, barring the Pygmy and Kinder, are registered by more than one organization. In some cases, they don‚Äôt recognize individuals registered with rival groups. Do your research before buying your minis, making sure they‚Äôre registered with the group you‚Äôd like to do business with.

Contact these organizations to find out more about miniature milkers.¬†

This article originally appeared in the July/August 2022 issue of¬†Hobby Farms¬†magazine.