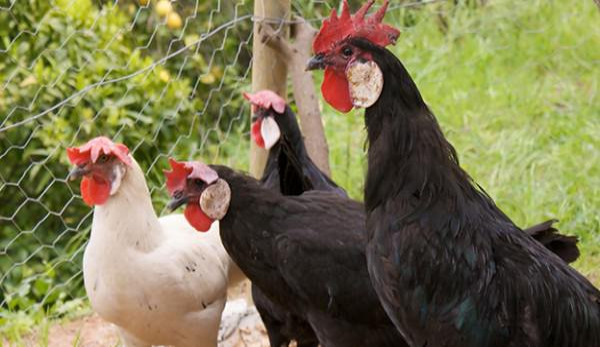 Use: Minorca chickens are known as wonderful layers of large, chalky-white eggs.

History: Once known as the Red-faced Black Spanish, the Minorca chicken breed was officially imported from Spain to England by Sir Thomas Acland in 1834. However, the breed was found in Devon and Cornwall, England, before that, possibly as early as 1780. J.J. Fultz of Mount Vernon, Ohio, brought the Minorca chicken breed to America in 1884. The American Poultry Association admitted the single-comb Black Minorca and the single-comb White Minorca to the Standard of Perfection in 1888; the rose-comb Black Minorca followed in 1904; the single-comb Buff Minorca in 1913; and the rose-comb White Minorca in 1914.

Conformation: Although slender and racy like typical Mediterranean chicken breeds, the Minorca chicken breed is bigger than the others. Minorca roosters weigh 9 pounds and hens weigh 7Â˝ pounds. Single-comb Minorcas have huge, six-point combs and large wattles, both of which have thermoregulatory capabilities and help keep their bearers cool in the summer but predispose them to frostbite in the far North. Rose-comb varieties, however, are winter-hardy where single-comb Minorcas are not because the single comb is more prone to frostbite.

Special Considerations/Notes: Minorca hens are non-broody and respectable layers of large, chalky-white eggs, averaging three to four eggs per week. They are noisy, flighty, early-maturing chickens. They are adept fliers (a common characteristic of Mediterranean breeds), rugged and self-reliant. They prefer to free-range, though they also tolerate confinement reasonably well. The breed is listed in the Watch category of the American Livestock Breeds Conservancyâ€™s Conservation Priority List.