These tiny beneficial insects use their massive appetites help clear your garden of pests. 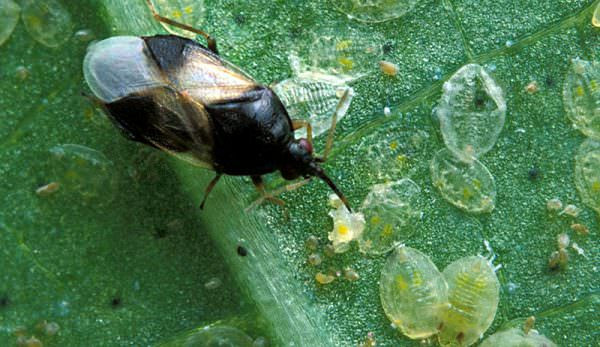 So small that it can be hard to spot, the minute pirate bug is a beneficial predator that can make a big impact on your pest populations. Both the young and adults actively seek out a range of soft bodied insects, including spider mites, aphids, thrips, whiteflies, insect eggs and even young caterpillarsâ€”meaning theyâ€™re a big friend to the garden. Both the adults and nymphs have a classic sucking-and-piercing mouthpiece, which they use to consume the liquids from the bodies of their prey.

Studies have shown that a single adult minute pirate bug can consume two to three dozen mites per day, making them one of the most effective beneficial insects. These predators are so prized among gardeners that they are available for purchase, but those of us working on a small scale can encourage their populations by limiting or eliminating the use of conventional insecticides, which often indiscriminately destroy both pest and beneficial insects.

A Bug With Bite

While you may praise the minute pirate bugâ€™s affinity for aphids and mites, your tune may change if youâ€™re the recipient of its bite. Late into the summer, you might find the occasional nibble from this insect, and entomologists are unclear whyâ€”the pirate bug is not intentionally seeking out gardeners as a food source. However, while the bites can be quite painful, thereâ€™s is no reason for alarm, as the irritation tends to be temporary in most cases.

Less than 1/8 inch long when fully grown, the minute pirate bug is a tiny predator in the â€śtrue bugsâ€ť order (Hemiptera), which includes stinkbugs in its catalog of more than 50,000 species of insects. The minute pirate bug is roughly oval-shaped and typically has geometric black-and-white markings, though the exact design and coloration can vary among the various species. The wings extend well beyond the end of the abdomen. Pirate bug nymphs are smaller and teardrop-shaped with a clear to yellow coloration based on the developmental stage.