A Penn State anthropologist sets out to the fields to develop better protective farm gear that farmworkers are willing to use. 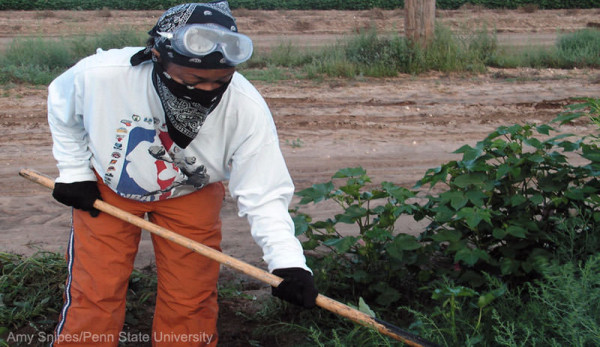 We rely on our country‚Äôs farmworkers for virtually all of the fruits and vegetables that grace our tables, yet they are among the poorest of the working poor.

Often living in sub-standard conditions and with little access to healthcare, many farmworkers travel from job to job, chasing the harvest across America’s heartland. Working long hours in the fields, they‚Äôre constantly exposed not only to hardship and severe weather, but also to dangerous pesticides.

As Amy Snipes puts it, “Farm work is more than an occupation. It is a condition of risk.”

Snipes should know. As an assistant professor of biobehavioral health at Penn State, she spends months at a time with farmworker families, observing and recording their lives and concerns as she works alongside them in the field. Trained as an anthropologist, Snipes has built her career on the use of ethnography (the study and systematic recording of human cultures) as a means for improving farmworker health.

The U.S. Environmental Protection Agency estimates that between 10,000 and 20,000 pesticide poisonings occur annually among the nation’s 2 million agricultural workers, with acute effects ranging from rashes and nausea to respiratory problems and death. Cumulative long-term exposures increase the risks of cancer, birth defects and neurological impairment.

As a primary safety measure, the EPA mandates the use of personal protective equipment, or PPE, to minimize pesticide exposures. Yet the use of PPE‚Äîgloves, goggles, hats, coveralls and boots‚Äîis low among farmworkers, and intervention efforts have had only limited success in improving compliance.

“There are many reasons for this,” Snipes says. Protective equipment can be difficult or uncomfortable to wear. It can slow the work in a job where speed is essential. Plus, protective farm gear isn‚Äôt always provided by employers, and even when it is, its use isn‚Äôt always enforced.

Below the surface, Snipes says, are other, cultural reasons. More than 80 percent of U.S. farm workers are Latino, most coming from Mexico, so language can be a substantial barrier. But it‚Äôs important to at least understand farmworkers’ shared beliefs about risk, she says.

“Anthropologists know that risk responses are embedded in a cultural framework,” she explains. “I always tell this story about my grandmother. She taught me as a young girl that it’s risky to wash your hands with cold water, that cold water is somehow associated with later developing arthritis. I’m an adult now and fairly well-educated, and I know in my head that this is not the case. But if you ask me what I use to wash my hands, it’s hot water. Because this is part of my belief system, something that was passed on to me. And it impacts my behavior.

“I’m interested in the same kind of phenomena among farmworkers. What are the widespread beliefs that are passed down regarding pesticides and exposure, and how do they impact behavior and, ultimately, health?”

Snipes began as a graduate student at the University of Washington, following apple pickers in the Yakima Valley. Currently Snipes works mostly in the Rio Grande Valley in Texas. For periods of three months to a year, she latches on with a group of farmworker families as a participant observer, moving along with them from crop to crop.

Along with picking produce, she gathers data: conducting interviews and focus groups, administering surveys and epidemiological assessments, and collecting biomarkers of pesticide exposure. “I want to have a comprehensive view of what’s happening in their lives,” she says.

Snipes brings a special understanding to the field that goes beyond her academic training. “My own grandmother worked picking cotton,” she says, “so I have some understanding of the hardships, and I have those stories to share.”
¬Ý
Among her findings is a common belief that danger attaches to the physical form that a pesticide takes and not necessarily to the chemical compound itself. “So if it’s wet, a spray that people can feel landing on their skin, it’s seen as harmful, and there is great concern. If it’s dry, however, there is little or no concern. They call it ‘powder,’ and consider it almost like dirt.”

A similar distinction is made between hot and cold. “Just like my grandmother, many farmworkers believe that if you wash your hands with cold water you’ll end up with arthritis, or rheumatism,‚Äù Snipes says. “This type of belief is very common cross-culturally, but in this context, it may have health impacts.”

In the field, she explains, where workers are given cold water both to drink and to wash the residues of pesticide powder from faces and hands, they might rather wait until they get home to a hot shower, believing that cold water is to be avoided, and that powders aren’t really harmful anyway. “That decision means eight to 12 hours of additional exposure.”

Two sources of inspiration flank Snipes on the walls behind her: a small photograph of herself with Dolores Huerta, co-founder of the United Farm Workers, and a large, brightly colored rendering of Our Lady of Guadalupe, patron saint of campesinos, painted by a farmworker’s son.

Her ultimate goal, she says, is to translate her findings into an intervention strategy that improves farmworker health. “It’s really about supplying people with practical solutions.”

That means taking into account not only the cultural backstory but also the gritty realities of fieldwork.

“Our population is severely below poverty level,” she says. Federal poverty level is $23,500 for a family of four; farmworkers average $10,000 to $15,000. “And in many cases they are paid by how much they pick,‚Äù she continues. “A strong temptation, even for me, is to take off the extra clothes that slow you down‚Äîbecause if you’re slow you’ll get fired and somebody else will replace you.”

It can be suffocating wearing protective gear under the hot sun, she adds. And safety glasses tend to fog, making it difficult not only to see what you’re picking but also to avoid snakes and other threats. “People are balancing these risks against the risk of exposure.”

One major challenge was how to communicate effectively with a mobile, low-literacy population. The answer, not surprisingly, was to adopt a mobile platform. The researchers gave farmworkers cell phones, enabling timely, two-way sharing of information. “We can use the phones not only to deliver messages,” Snipes explains, “but also to receive health-related data from study subjects in their environment, and in real-time. We’re the first to do this in this population.”

The response has been gratifying: “Our farmworkers are using those phones, and they’re using them daily. They’re getting our messages and giving us back their data. And not just closed-ended data; they’re giving us ideas. They are essentially part of our research team.”

Results of the study are still preliminary, Snipes stresses. “But we’re very excited about what we’re seeing so far.” Use of PPE has improved across the board, she says, and the approach itself has stirred interest among other researchers eager to learn more‚Äîeven from as far as South Africa. “They have similar exposure problems there and are really interested in using this methodology.”

If it works, Snipes says, she would like to see the intervention scaled up to other, larger farmworker populations. Eventually, she hopes, it will inform public health policy across the U.S. and beyond.

For the moment she sits in her quiet office in University Park, but in a month or two she’ll be back, quite literally, in the field.

“When I began this work I was very humbled to hear farmworkers say that they loved their jobs,” she muses. “They love this work that is so tough and dangerous and doesn’t pay much because, they say, ‘Our hands feed the world.’ I take that with me.”