When Uzzi and I were little kids, we drank milk from bottles. It was good! Then Mom said we got too old for milk, and we started eating hay instead. 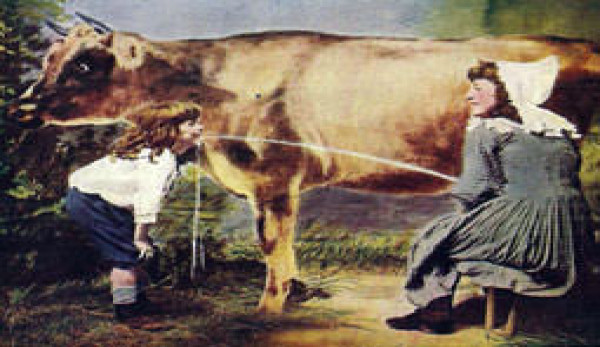 When Uzzi and I were little kids, we drank milk from bottles. It was good! Then Mom said we got too old for milk, and we started eating hay instead.

Mom and Dad are looking forward to the birth of Bon Bon’s kids so they’ll have yummy goat’s milk, too. Dad stirs chocolate syrup into goat milk and swills it down. He loves it on a hot, sweltering day, but Mom is jealous because she can’t drink milk. She can put a tiny bit on her cereal, but that’s all because drinking milk makes her sick. That’s because she’s lactose intolerant.

Lactose is milk sugar. It’s digested in human intestines by lactase, an enzyme that helps break lactose into smaller sugars. If a human doesn’t produce lactase, the lactose ferments in her intestine, and then watch out! Symptoms include nausea, cramping and bloating, pain, intestinal gas, and diarrhea. Mom gets them all, and she isn’t alone. According to the University of Georgia Health Center, on average, 80 percent of Asian and Native Americans are lactose intolerant, as are 75 percent of African Americans, 51 percent of Hispanic Americans, and 21 percent of Caucasian Americans.

In ancient days, nobody much older than 4 years of age could digest milk because their bodies couldn’t produce lactase. Then people in several scattered parts of the world domesticated cattle. These people developed the ability to digest milk by eating processed or fermented milk products, like yogurt, cheese, kefir and butter. These foods are lower in lactose than plain, fluidÂ milk so they’re more digestible. (Mom can eat them, too.) Finally, a mutation in milk product users’ genes occurred and their bodies began producing lactase. After that, their descendants who inherited that gene could drink milk.

In June 2012, a team of scientists led by Richard Evershed of the University of Bristol in BritainÂ released the results of a study they did on pieces of ancient pots recovered in Africa. The pot shards came from the Takarkori rock shelter in southwestern Libya’s Acacus Mountains, in what’s now the Sahara Desert but was then a fairly green and lush environment. The rock shelter’s walls are covered with beautiful, colorful paintings of ancient cattle, some with full udders and some being milked. Because of the paintings, scientists knew the ancient people who lived in the shelter milked cows, but because paintings can’t be accurately dated, they didn’t know when. Dr. Evershed, archaeologist Julie Dunn and their helpers used modern scientific techniques to analyze 81 unglazed pot shards dating from 5200 to 3000 B.C. Because the pots were porous, they absorbed fats from the food they contained. Guess what? The pots were used to store butter, cheese or yogurt! The ancient people who lived at the Takarkori rock shelter were processing milk to make it more digestible. They didn’t know it, but they were teaching their bodies to digest milk.