Molting is a fact of life with chickens. Learn what happens — and how to help your birds — when the feathers start to fly. 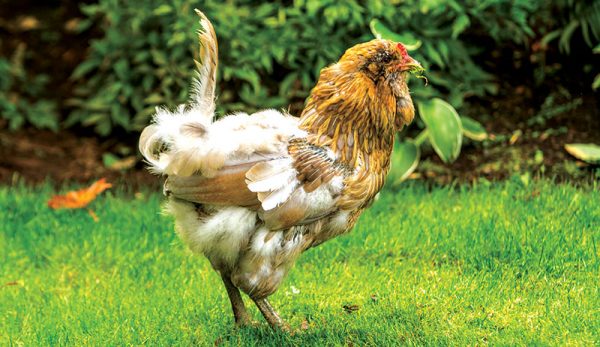 For those of us enamored with chickens, a hen or rooster in glossy fine feather rivals any postcard-perfect sunset for sheer loveliness. Consider the Rhode Island Red’s vivid cinnamon suit, the Barred Plymouth Rock’s outfit of dapper black and white and the Australorp’s iridescent night cloak—and these breeds comprise only a tiny portion of a beautiful, feathery whole.

Feathers are so integral to our birds’ beauty that it can be disconcerting when they start dropping all over the place, often making the coop look like a poultry slaughter scene. In the northwestern U.S., where I live, this usually occurs in September and October just as the weather turns cold and rainy again.

“Why do they always do this now?” I complained to a fellow raiser when it happened to my Barred Rock hens last fall. “I worry they’ll freeze.”

She was similarly perplexed. So I looked deeper into this mysterious process—known in the avian world as molting—to find out what I could do to better help my girls cope with these bad-feather days. Here’s what I learned.


To Molt or Not to Molt

More than just fancy adornments to swoon over, feathers are a defining characteristic of chickens and all birds and are essential to their survival. “Wild birds are heavily dependent on their feathers for insulation and [with a few exceptions] flight,” says James Hermes, Ph.D., an associate professor and extension poultry specialist at Oregon State University since 1987. “They need a good base of feathers to keep warm or cool, and every time one breaks, a bird has to work harder to fly.”

Though flight isn’t quite as essential to our clucky companions, they, too, rely on a healthy feather covering to protect their delicate skin from injury and help regulate their body temperature. Poorly feathered chickens might have difficulty weathering a harsh winter or extremely hot conditions. They might also need to eat more to maintain body temperature, meaning higher feed bills for producers.

If feathers are so important, why cast them off in such a dramatic fashion? “Molting is a natural part of a bird’s biology,” Hermes says. “Unlike hair that grows all of the time, a bird’s feathers grow to full length, then stop and sit there. They’re dead material, and they won’t repair themselves if they break or get scruffy.”

Composed of a type of fibrous protein called keratin, feathers are complex epidermal structures whose growth is regulated by an equally complex series of hormonal changes. To replace their old, worn plumage, wild birds molt most of their feathers and grow new ones every year in an orderly fashion, with the new feathers pushing the old ones right out of their follicles. Though some avian species, such as ducks, become flightless during this time, you probably won’t see any bald birds out there. Indeed, you would probably be hard-pressed to even tell they’re molting. The number and timing of molts varies among avian species, but it usually occurs outside the breeding season.

Feather growth and egg production are each protein- and energy-intensive processes, so it makes biological sense for them to take place at different times of the year.

Our domestic laying fowl approach molting a little differently. According to Hermes, layers kept under natural light conditions will also normally undergo a molt each year, but often this process is incomplete. “It may take them two or three years to go through an entire molt,” he says. “Being domesticated, they just aren’t as dependent on their feathers as wild birds.”

How do you know whether feather loss results from molting or some other, more sinister cause? Begin your detective work by paying attention to time of year (molting usually occurs in the autumn) and to the overall plumage condition and behavior of each individual.

“Localized feather loss—usually on the rump, back or tops of wings—is almost always caused by feather picking among flock mates or overbreeding by a rooster,” says Hermes of Oregon State University. “Molting doesn’t typically cause a naked spot.”

Broken, frayed feathers can also signal that another bird is the offender.

Feather picking can be a vicious cycle, Hermes explains. As new blood feathers sprout in the injured area, other chickens peck at them and like the taste. “We’re not sure why they start or why they stop, but sometimes, you need to separate the picked-on bird from the rest of the flock until those feathers grow back.”

External parasites—notably mites and lice— can damage your flock’s plumage as well, although these pests usually don’t cause outright feather loss. An exception is the microscopic depluming mite, which burrows into the feather follicle and causes intense itching and pain, leading the bird to pull its own feathers. Any dull, unkempt plumage outside of molting season calls for a closer inspection.

“Pick up your birds and look them over,” Hermes says. “Red mites will be on the birds at night, and adult lice are pretty obvious. You might see little deposits of eggs that look like cement at the base of feathers. Lice are mostly interested in eating skin dander but you’ll often see holes in the feathers as well.”

Once you’ve identified which parasites you’re dealing with, treat accordingly.

Not all chickens molt in the same way or at the same time. The biggest factor influencing the molt is day length, with most domestic fowl starting to lose their feathers as the days shorten in the fall. Of course, the exact timing varies depending on location.

Breed also influences molting: Commercial laying poultry breeds, for instance, might respond with a more pronounced molt while fancy breeds often have a less noticeable molt. Nutritional deficiencies and stress—from crowding or extreme heat, for example—can affect molting, causing birds to shed their feathers outside the usual season or go through a more drastic molt.

Among my own flock, I’ve noticed molting schedules vary even among individuals of the same breed. Some unfortunate birds shed lots of feathers at once and take longer to grow them back, while others cast off fewer feathers and replace them quickly. Additionally, senior birds often go through a more severe molt than their younger companions.

As mentioned before, wild birds usually molt outside the breeding season. Chickens, on the other hand, have been bred to lay eggs year-round, which creates a bit of a molting dilemma. With layers kept under natural light, egg production slows significantly during the molt and becomes erratic because of hens’ different molting schedules. This is why commercial farms usually induce flock-wide molting with controlled lighting and feed changes that temporarily halt egg production. Taking a reproductive “rest” while they molt brings the hens back into full production faster.

Some small-scale raisers also use artificial lighting to extend day length and keep their birds laying through the winter. Still, to keep layers in full production, it’s important to give them a break from the lights during fall or winter so they have time to molt.

“Chickens need to molt,” Hermes says. “If you have your birds on lights all of the time, they’re going to molt eventually, but it won’t be a very good one.”

Chicks burst out of eggs covered in soft down—part of what makes them so appealing. From this point on, it seems like feathers sprout at the speed of light, and by 4 or 5 weeks of age, the chick has a full compliment.

The growing poult undergoes another mini-molt at around 8 to 10 weeks and then completes its first big-bird autumn molt at around 18 months. Unless some factor causes abnormal feather loss, you can expect an adult chicken to molt once a year after that.

Nutrition is important for chickens at any time of year, but especially so during the molting season. According to Hermes, a balanced commercial diet appropriate to the age, stage and type of flock provides all of the essential nutrients molting birds need. For raisers who prefer to supplement at this time, he advises sticking to a limited amount of protein-rich extras, such as dried mealworms, cat kibble or meaty table scraps, rather than carb-heavy fare.

“Eighty percent of what you serve your chickens should be prepared feed, and the rest they should clean up in 10 or 15 minutes,” Hermes says. “Otherwise, they’ll fill up on treats and skip the good stuff.”

With their feathery insulation diminishing daily, it’s also critical that your birds have a cozy coop or other snug shelter to protect them from the elements. Plus, because molting itself can be difficult on a bird, keeping your flock’s stress levels down is important at this delicate time. If possible, postpone any major changes, such as a coop upgrade, enclosure move or new flock addition, until after the feathers stop flying. Keep your biddies safe from harassment by pets, kids and predators. Handle your chickens as little as possible to avoid upsetting them and to avoid damaging those growing feathers.

“If broken, they bleed a lot and don’t grow back well,” Hermes says. When confronted with this anxiety-inducing situation, he advises leaving the quill in place rather than yanking it out, which can damage the muscle if done incorrectly. To stop the bleeding, put pressure on the broken spot and then apply a blood-clotting agent. If bleeding continues despite this intervention, the broken shaft will probably need pulling. Consult a vet or experienced poultry raiser if you’ve never done this.

Note: If you routinely keep your chickens’ wings trimmed, you’ll need to repeat this procedure after the molt, then keep close watch for any remaining blood feathers.

It might seem like molting lasts forever, but if you provide proper nutrition and care, you can expect your chickens to finish the process in eight to 12 weeks. Then, it’s time to take some pictures for social media and kiss those bad-feather days goodbye.