Mom is reading Uzzi and me her favorite book, Three Bags Full: A Sheep Detective Story. 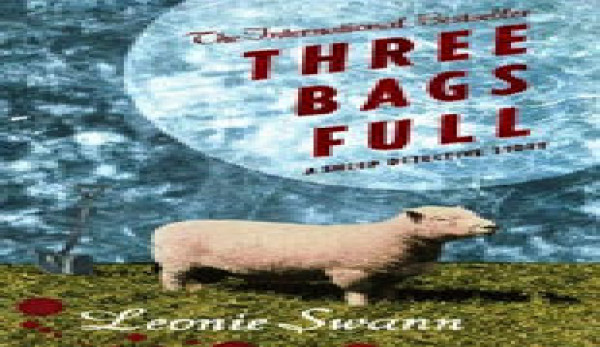 Mom is reading Uzzi and me her favorite book,ô Three Bags Full: A Sheep Detective Story. It was written by a German lady named Leonie Swann. Itãs about a flock of clever sheep who solve their shepherdãs murder and discover a thing or two about humans along the way.

Mom got the idea about reading it to Uzzi and me because George, the shepherd in the book, used to read to his sheep every day. Usually romance books about red-haired ladies called Pamela, but he once read part of a detective book to them too. Thatãs how they figured out how to solve his murder.

The sheep are Othello, a four-horned, black Hebridean ram with a secret past; Mopple the Whale, aô Merino ram; Miss Maple (ãthe smartest sheep in Glennkill and maybe the whole worldã); Sir Richfield, the flockãs aging lead ram and his mysterious brother, Melmoth; and a supporting cast of other neat sheep and lambs including Zora, a Connemara Blackface eweô who is the sheep of the abyss. Zora likes to go way up on the cliffs and look out over the sea (like a mountain goat, so Uzzi and I like her best).

In this passage Zora is up on the cliff watching a fierce dog and Othello battle to the death (hint: Othello wins). Mom says this is the kind of writing that makes her love this book.

ãZora quickly closed her eyes and thought about something else. That was her way of dealing with the bad moments in life. She thought of the day when she brought her first lamb into the world, thought of the pain, and the anxiety later, because the lamb had been brown as earth, even after she had spent ages carefully licking the blood off of his coat. Brown as earth, with a black face. Later the brown would turn a woolly white, but Zora wasnãt to know at that time.

“She had wondered why she was the only sheep in the meadow not to have had a white lamb. But then the lamb had bleated, tiny and brown as he was, and he had a more beautiful voice than any of the other lambs. He had smelled good too. And Zora knew she would defend him against the whole world, whether or not he was the brown color of earth. She had taken him to the cliffs that very day to show him the gulls and the sea.ã

If you love sheep, adventure, and lots of humor you should read this book too. And when youãre finished, read it to your goats. Uzzi and I give it two horns up!