Why Good Beekeepers Monitor The Migration Of Monarch Butterflies

Monarch butterflies travel as far as 3,000 miles roundtrip. Their migration is similar to that of the honeybee. Here's how you can help protect them. 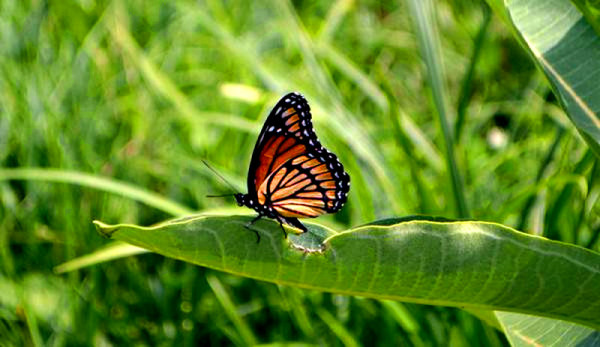 Starting in the late summer in the northernmost reaches of North America, monarch butterflies begin to migrate south. Between August and November of each year, they’ll move en masse toward their winter homes. They’re on a journey to overwinter in parts of Mexico and Southern California, seeking warmer climates to safely spend the winter and lay their eggs in spring. Where the monarchs go depends on where they live: The monarchs west of the Rocky Mountains migrate to the California coast, while those east of the Rockies seek shelter in Mexico.

Monarch butterflies are incredibly unusual in their migration pattern, which resembles those of birds or whales rather than insects. These tropical butterflies travel as far as 3,000 miles in their two-way migration each year. They are the only ones to do this.

If you’ve kept abreast of the peril the world’s honeybees face, you probably know monarchs are suffering a similar dilemma. In their case, destruction of natural habitatâ€”namely, their host plant, the milkweedâ€”has led to devastating losses in their population.

Many mysteries remain in how monarchs migrate. Like honeybees, the monarch butterflies hatched in late summer will live all winter. These surviving winter butterflies will lay their eggs on milkweed plants in their winter homes of Mexico and California, and their offspring will migrate north the following spring. Also like honeybees, the butterflies hatched in the spring and summer live only two to six weeks, meaning the butterflies that migrate south the following fall are several generations removed from the original traveling butterflies. How do they know where to go? How are they able to travel so far with very little resources along the way?

We do know that the monarchs hatched in the late summer are biologically different than those that hatch earlier in the year. Their bodies are preparing for the long journey ahead. Unlike their summer kin, these migratory monarchs don’t lay eggs until springâ€”if they arrive at their destination, of course. They stock up on nectar fuel and travel south together. It’s believed that they conserve their energy by riding the wind on their journey south.

So, where do you come in? Researchers continually track the monarchs’ migration, hoping to gain clues to their yearly behavior patterns and learn more about it in order to protect them. Online charts such as this one, structured by latitude and date (from mid-August to November) are available to see when the monarchs are most likely to be in your area. Remember, monarchs leave the northern states earlier in this time frame. Keep watch for these unique orange-and-black butterflies, and if you spot them, report any and all behavior you notice: where and when they were spotted, nighttime roosts (in trees), peak migration events, eggs or larvae that you see, and general sightings at any time of the year, even if you’re not sure if they are migrating. Your contribution of this information helps scientists and researchers better understand the monarchs and their needs, which can help us to help them.