Two beekeepers walk you through a monthly schedule of easy-to-follow beekeeping tasks according to region. 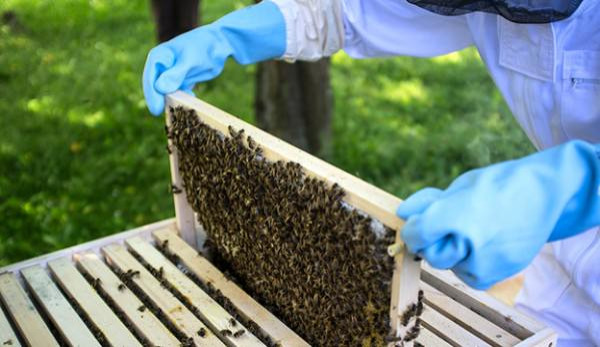 TheĀ beekeeping year isnāt set in stone. Bees work in tune with the seasons, and how and when you work your hive will vary from region to region and year to year. Still, you can follow a general plan for what to do throughout each season to ensure healthy bees and a productive honey crop. Use this calendar as a guide, and talk with local beekeepers to refine the timing. Learn which conditions to watch for to complete the tasks.

The beginning of the year is the time to build beekeeping equipment, long before you put it to use. Itās much easier to do it now rather than scramble for gear when your package arrives or you capture a swarm. In many regions of the country, the bees stay in the hive in January except to go out for occasional cleansing flights (to defecate) on warm days.

“January is kind of hands-off,ā says Marina Marchese, owner of Red Bee Honey in Weston, Conn. “We really donāt open the hive. If thereās snow at the entrance, clear it off to make sure thereās ventilation.ā

Linda Tillman, a master beekeeper in Atlanta, says February is an important time to make sure the hive has enough honey. This is particularly true in the South, where the weather is milder and bees are more active instead of clustering to stay warm; however, northern bees also need adequate stores to maintain their hive temperature through cold spells.

Carefully lift an end of the hive to gauge the weight of the deeps (the two boxes that make up the main body of the hive). You want your hive to weigh at least 50 to 70 pounds at this time of year.

“Iād rather feed honey than anything else,ā Tillman says. Honey is healthier for the bees than a sugar-based feed, as it contains all of the necessary enzymes and vitamins that the bees need. Tillman retains frames of honey that she can slide into the hive as needed during the winter.

However, if you donāt have honey, you can use another type of feed. If Marcheseās hive feels light when she lifts a corner or end of it, she places fondant or a candyboard inside to feed the bees.

The month of March can surprise beekeepers because many bees starve during this time of the year, Marchese warns. Continually check the weight of your hive, and feed more honey if necessary.

“Since [the bees] are moving and expending energy, you want to make sure theyāre fed,ā Marchese says, though she takes a fairly hands-off approach. “We might open the hive on a fairly warm day.ā During this time, some northern beekeepers treat for mites before the nectar flow begins.

Tillman recommends that beekeepers in the South focus on swarm prevention early in the month by checkerboardingāalternating empty brood frames and honeycomb above the brood chambers to create space for the bees or, rather, make them think that they have more space. In an untouched hive, the brood chamber containing the eggs and hatching larvae is located in the center, and checkerboarding spreads out this area. It doesnāt require additional honey; just move empty honeycomb (a frame with drawn-out wax) into the spot from which you removed a frame with brood on it.

By April, southern bee hives are moving full-steam ahead into honey-making. “Add boxes [to your hive],ā Tillman says. “You want to keep up with the honey supply.ā

Beekeepers in cooler regions will experience a slower start during April. The bees begin bringing in pollen for the season, so itās time for a thorough hive inspection.

“I open up the hive,ā Marchese says. “I want to see whatās going on. It takes some time before you get to a point where you can read the beesā behavior.ā She looks at the condition of the comb, whether the queen is laying eggs and if the bees are bringing in pollen. This also is a good time to look for signs of hive pests and diseases.

May is the heyday for northern hives. “You should have a nice buzz of activity at the entrance,ā Marchese says. “You should smell wax and honey at the hive.ā

When you open the hive, look for nectar and pollen stores, and make sure thereās a nice laying pattern in the brood chambers. Also keep an eye out for swarming behavior. Reverse boxes to make the bees think they have more space, and identifiy queen cells. Once area plants begin their nectar flow, you can place a super on the hive.

In the South, bees are busy during May. “Youāll start seeing capped honey,ā Tillman says. At this point, simply check your hive to ensure the queen is alive and busy laying eggs.

“The weather is nice, and the bees are in full swing,ā Marchese says. Every June, she checks her beehive for a good laying pattern and a healthy queen. “I might add more supers,ā she notes. Southern beekeepers can remove the supers and harvest their honey.

In northern states, beekeepers should be capping nectar in July, Marchese says. She removes the entrance reducer to allow the bees to properly cool down their hive.

In the South, bees have finished producing honey, so itās time to split the hive and create more to give the bees time to build up their own honey supply before winter. By placing the queen and half of the hive in a new colony, Marchese leaves the remaining beehive queenless. “That means thereās no brood for 42 days,ā she says. “That might solve your varroa mite problem.ā (Beekeepers should look for mites at all times, though.)

In the Appalachian region, July is the best time for beekeepers to add supers to their hives to gather sourwood-honey harvest. Other areas might take advantage of late-season nectar flows.

“By now, you should be thinking about winter,ā Tillman says. “Your bees are through with their work.ā Prepping for winter entails combining weak hives, eliminating pests and watching honey stores.

Marchese recommends replacing the entrance reducer in August to give the bees a better chance to ward off thieving yellow jackets. For particularly bad robbery cases, sheāll close up her hive for 24 hours, but otherwise prefers to leave the bees alone during this time. With no significant nectar flow, they become hungry and more active.

“Make sure they have a good pollen store,ā Tillman suggests. Check honey stores, too. If you wish, you can place a drone-cell foundation frame in the hive for a chemical-free method of mite control.

In northern states, beekeepers might experience a late-season nectar flow from goldenrod and wildflowers, but Marchese says itās acceptable to feed sugar syrup to ensure the bees build enough honey reserves for the winter. Once the honey supers are removed, apply chemical mite control. Always do this before or after honey production to avoid chemical contamination.

“Make sure the hive has enough weight,ā Tillman says. A hive with two deeps and a medium super should weigh between 120 to 130 pounds.

In all regions, check your hives for pests and adequate honey reserves. “[At this time], we start feeding [sugar syrup],ā Marchese says. Using reserved honey stores works, as well.

Feeding continues as long as the bees can use the sugar syrup. Marchese recommends putting on mouse guards and making sure the entrance reducer is attached at this time.

“Get ready for the long, cold winter,ā Marchese says. Stop treating for mites. Other than to remove the strips used to control mites, donāt open your hive.

At this time, “Iām enjoying my products of the hive,ā Tillman says. Itās also a good time to read new beekeeping books and make a wish list of items such as a beekeeping suit, equipment or even a different subspecies of Honey bee for the next season.

Excerpt from Beekeeping, part of the Popular Farming Series, with permission from its publisher, I-5 Publishing, LLC.