Last week, I told you some of the weird things Uzzi and I learned about eggs. We also learned some things that aren’t so crazy. 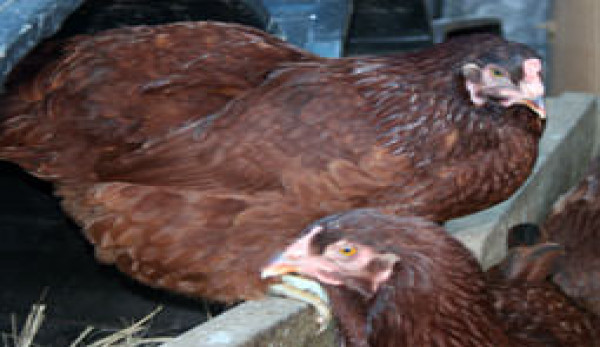 Last week, I told you some of the weird things Uzzi and I learned about eggs. We also learned some things that aren’t so crazy.

Chickens lay all sizes of eggs, from peewee weighing 1.25 ounces each to jumbo at 2.5 ounces each. The shell accounts for about 12 percent of the weight of a large egg. Pullets start by laying smallish eggs, but as a hen ages, her eggs get bigger. She also lays eggs of a specific color, not pink-tinted one day and deep, dark brown the next. Our Buckeyes’ eggs are medium in size and range from lightly tinted to medium brown. (Camilla lays the lightly tinted eggs.)

Colored eggs happen when pigment is added during shell formation. A thin layer of brown pigment is added to a brown egg’s bloom. Also called its cuticle, bloom is the last layer of shell deposited before a egg is laid. Blue pigment gets deposited in every layer, so blue eggs are colored all the way through. Green eggs are blue-shelled eggs with a brown bloom. White eggs aren’t pigmented at all.

You can tell how old an egg is by placing it in a container of water. A fresh egg sinks and rests horizontally on the bottom. A two- to three-week-old egg stands vertically at the bottom, big end up. Really old eggs float.

If you can’t remember if you boiled an egg, spin it; boiled eggs spin really fast, fresh eggs slowly wobble.

What chickens eat affects the taste of their eggs and color of their yolks. The rich, yellow color most humans prefer comes from xanthophyll, a yellow-orange pigment found in green plants and yellow corn. Acorns or shepherd’s purse can turn yolks green, and silage or cottonseed meal make reddish- or blackish-green yolks. (Yuck!)

Finally, not every egg a hen lays is “normal,” though if they’re fresh, they’re still safe to eat. Here are some weird things you might find in your eggs: