This warming meal features the savory spices of North Africa and can easily be made in the oven or slow cooker. 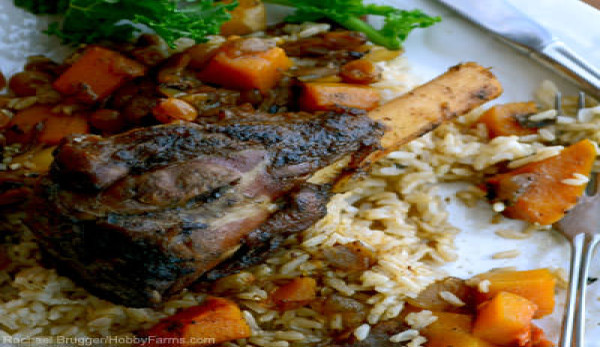 This recipe is good with carrots instead of or in addition to winter squash.

Oven Preparation
Heat oil in Dutch oven over high heat. Dredge shanks in flour if desired. Brown lamb shanks on all sides, setting aside as browned. Before returning shanks to Dutch oven, brown onions and garlic in remaining fat. Add broth, spices and salt to taste. On stove top or in 325-degree-F oven, cook about 2 hours, or until meat is tender. Add squash approximately 30 minutes before end of cooking time. Add dried fruit and cook 15 minutes more or until fruit has plumped and softened. Remove bones before serving if desired. Garnish with fresh cilantro or dried coriander.

Serve with couscous or rice to soak up juices.

Â Use your leftovers to make Meat Pie with Lamb Shanks.