It didn't take long for our young turkeys to outgrow the portable pen we use each year to raise meat chickens. 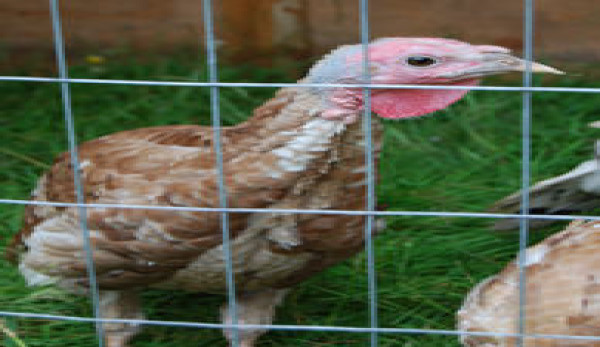 It didn’t take long for our young turkeys to outgrow the portable pen we use each year to raise meat chickens.Â  Since mid-June, we’ve been moving the pen around their pasture once a day, and it’s worked great for keeping them safe from predators while they forage for grass, weeds and bugs (plus fertilize the pasture).Â

By the way, the turkeysâ€™ care became so much easier and more pleasant once we moved them from their brooder box in our mudroom to their outdoor quartersâ€”no more messy shavings to deal with, heavy brooder lid to wrestle, and daily greens to snip.Â

Even better, no more whiffs of eau de poult poop while doing the laundry.Â  Another perk: The turkeys seem much healthier and happier once they’re out in the fresh air and supplementing their diet with natural foods.
Â
For last year’s flock, we built a large, open-bottomed wooden pasture shelter for the birds to roost out of harms’ way at night.Â

My husband had designed this shelter with skids so it would be portable, too, the idea being that we could haul it to new, clean ground with the truck each year, scattering the old, accumulated straw litter/compost around in the process.Â

But when we actually tried to put this idea into practice this weekend, the move didn’t quite go as planned.Â
On the bright side, we did learn a few things, like:

1.Â  Never try to haul a big, heavy turkey shelter with a slender rope attached to your truck.Â  It WILL break.Â  Use a super-sturdy chain insteadâ€”and stand far away in case that breaks, too (ours held, thank goodness).

2.Â Â  A big, heavy turkey shelter will settle into the ground over the course of a rainy winter, making it stick when you try to move it.Â  A thick layer of old straw litter/compost will also impede the structure’s movement when the bottom cross-board drags against it.Â  Possible result: Enough resistance to pop the bottom cross-board and side wall off the structure, which is exactly what happened in our case.Â

3.Â Â  Yellow-jacket wasps seem to like making their nests in old straw litter/compost, and when disturbed, they get very angry.Â

4.Â Â  Once it starts moving, a big, heavy turkey shelter on skids will move okay.Â  In a straight line. If you try to turn it sideways, it may threaten once again to fall apart.Â
After the wasps vacated the vicinity and Brett re-attached the wall, we moved our three Bourbon Reds and two Royal Palm turkeys in.Â

Right now, theyâ€™re getting used to their new home before we release them, wings clipped, to start roaming the pasture by day.

So what did you learn the hard way this week?Â Â