Photo by Rick Gush Moving these boxes—all 360 of them—down the cliff is going to be a real challenge. I’d enjoy being able to recount the marvelous work that I’ve done in the garden this week, but it just ain’t so. Instead, I’ve been moving my office/workshop. (Well, I did at least manage to plant […] 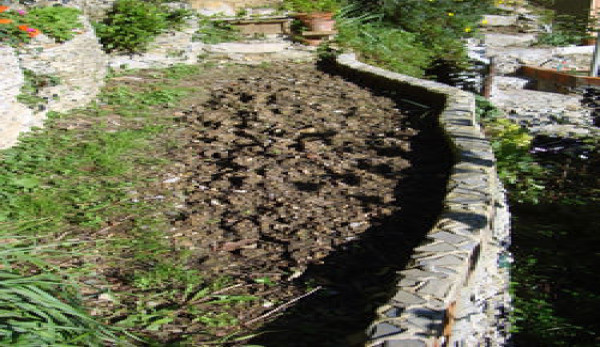 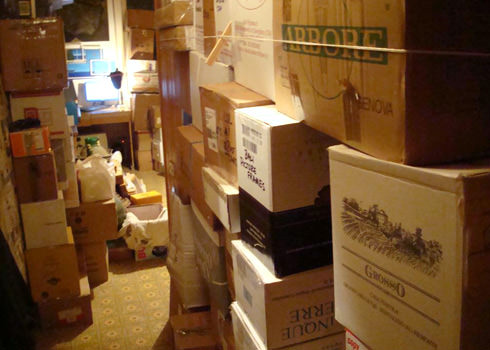 Moving these boxes—all 360 of them—down the cliff is going to be a real challenge.

I’d enjoy being able to recount the marvelous work that I’ve done in the garden this week, but it just ain’t so. Instead, I’ve been moving my office/workshop. (Well, I did at least manage to plant the fava beans this week. The little strip (pictured below) where I planted them is, in fact, my largest bed, so one can better understand the little handkerchiefs of cultivatable land I’ve created on the cliff face.)

Anyway, my office/workshop has been in its current location for 10 years now, so the process of packing everything up is sort of an archaeological exercise. I’ve been packing boxes and cleaning out the old place for the last month, and except for the computers, I’m mostly ready. I’ve counted 360 boxes and other wrapped stuff, all ready to move. Whew! 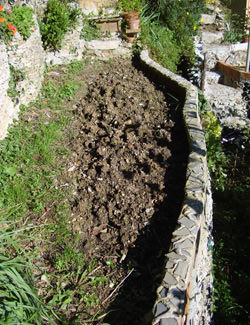 Despite all the work I’ve put into packing boxes for the move, I managed to find time to plant my fava beans.

The new place is full of charm. It’s a series of three rooms strung out behind a garage.  I’d estimate that it was last painted before the second world war, and there’s a fair amount of fixing up to do. The rear room was used as a wine-bottling and storage location by a local fellow and his brother. Along with a lot of cool old bottles, I’ve inherited some other winemaking equipment, so I’ll probably try my hand at winemaking the next abundant grape season.

There are windows running down the south side of the building, so even without lights, the place is pretty bright. Well, at least it’s bright now, since I’ve taken down all the ancient drapes that covered the windows. The ceilings are really high in two of the rooms, almost 10 feet tall. I like the frequency of tall ceilings here in Italy.  The ceilings in our home are also more than 9 feet high.

I did have to cut out some iron beams that supported a sort of second story built into the room I’m going to use as the office, but the upper floor was made with some ancient tongue and groove boards. I’m going to use those to make a nice wood floor for the office room. I’ve also inherited a truckload of mixed ceramic tiles, because the previous tenant was a builder back in the 60s. Some of the tiles are wonderfully wild, and I’m planning to tile the workshop room with an abstract pattern before I build the workbenches.

There’s a little creek that runs right alongside the building, right underneath the windows. I like the loud gurgling that one can hear in all the rooms. I’ve already dropped a few tools into the creek while fixing up the windows, but I did manage to put a hook on the end of a long tube and reach down into the creek to retrieve them.

My goal is to finish at least the one room I’ll use for my desk and computers by the end of the month, at which point I’ll round up my friend with the big truck and make the move. There are about 200 steps down to the street in the current location, so lugging the 360 boxes down to the street level will be a task.

I adore making shelves and stuff for my workshop. The opportunity to create a brand new workshop is intoxicating.  I’ve got a whole lot of lumber all ready to go and a delivery of some new plywood scheduled for next week.  It’ll be a fun winter.