A feisty male house finch has taken to fighting with his reflection in the ladies’ room where I work. Sometimes I feel incredibly lucky. Not only do I live in an amazing urban-farming community, but I also work here, just a couple of miles from my house. The property where I work is around a […] 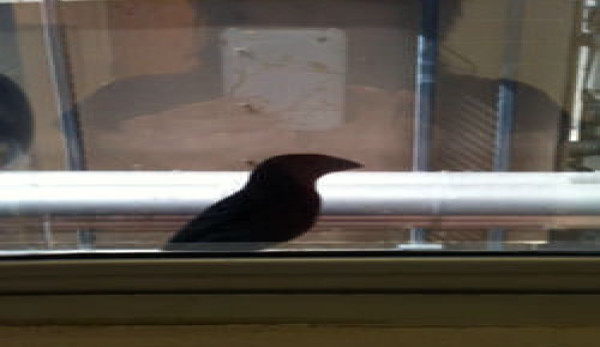 A feisty male house finch has taken to fighting with his reflection in the ladies’ room where I work.

Sometimes I feel incredibly lucky. Not only do I live in an amazing urban-farming community, but I also work here, just a couple of miles from my house. The property where I work is around a huge manmade lake that serves as a refuge for a host of water birds. The brush nearby is home to a family of coyotes and scores of raccoons, possums, skunks, ground squirrels and cottontails.

Another creature that calls the area home is the house finch, a bird that was once only found in Southern California. The species has spread to other parts of the U.S. and can now be seen even as far away as New York.

House finches are little brown birds, though the males do have a splash of color. Their heads and chests are usually red but sometimes orange. The females are plain and brown.

One day two weeks ago, while in the ladiesâ€™ room at work, I heard a loud tap tap tap on the window near one of the stalls. I went over to the window to see who could be trying to get into the bathroom from the outside and discovered it was a male house finch. He was perched on the ledge outside the window and pecking furiously at the glass.

I put my face practically up against the windowpane, but apparently, the bird couldnâ€™t see me. He was looking at his reflection, thinking it was another male finch.

This pecking-at-the-window routine went on for days. Every time Iâ€™d go into the restroom, Iâ€™d see him going wildly at the glass. I spent some time observing him and soon saw his mate, a cute little female, who watched calmly from nearby as he tried to drive off what he thought was a potential rival.

After this went on for a weekâ€”and all the women at work had commented on it to one anotherâ€”I came to the conclusion that this pair of finches had made a nest somewhere near the window and were either raising their babies or getting close to having eggs in the nest. The fury with which Mr. Pecker (as he came to be called) went at the window and the amount of time he spent there could only mean one thing: He was trying to protect his family.

Although I enjoy getting to see an angry house finch up close and personal (I can literally put my nose on the glass right where he is pecking), Iâ€™m concerned about this poor guy spending all his energy fighting a non-existent foe. I have opened the window a few times and put my hand out so could see that a human, not another bird, was nearby but to no avail. He flutters off when he sees my hand but 20 minutes later is back again.

Iâ€™m thinking about leaving some birdseed on the ledge in the hopes that heâ€™ll get distracted by it and give up the fight. At the very least, heâ€™ll have something to nibble on between battles with himself. As for my co-workers, they already think Iâ€™m a crazy animal lady. This will certainly help me keep my reputation.