Mulch Your Weeds and Grass the Right Way

Mulch is a highly effective member of your garden arsenal—but to defeat your garden adversaries, you must use it correctly. 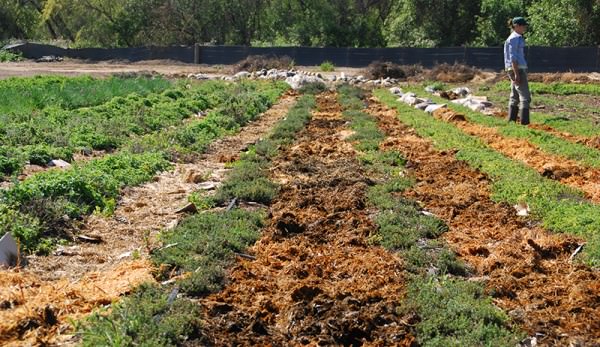 Mulch is a great gardening ­concept, but sometimes it’s oversold. I’ve seen many gardeners who’ve been misled into thinking that spreading a thin layer of any mulch over weeds or a lawn will kill undesirable plants. They mistakenly expect that they’ll soon be able to start a new garden in fresh, weed-free soil—it’s possible but probably not.

A thick enough layer of dense mulch—2 to 4 inches—can smother small and low-growing annual weeds like a wet blanket on a fire. The roots and stems of most annual weeds, such as chickweed, poor Joe and henbit, are weak enough that if completely covered by the mulch, they will either rot away or die from lack of sunlight within a week or so.

Even just 1 or 2 inches two of mulch can keep small, annual weed seeds from germinating. By small, I mean weed seeds the size of carrot seeds or lettuce seeds. Sorrel, purslane and the aforementioned chickweed, poor Joe and henbit are examples of annual weeds with small seeds. These seeds have few energy reserves and need to be on the surface to get enough sunlight to germinate. When buried under soil or mulch, they go dormant. But this only works until the mulch decomposes after one or more seasons.

The types of mulch you can use include:

How long before the soil is exposed again, requiring that your mulch be replenished, depends on rainfall and temperature. In cooler, drier weather, the mulch will last longer before decomposing, but in hot, wet climates, you’ll need up your layer depth to 3 to 4 inches to last four seasons in ornamental beds. In a vegetable bed that’s getting replanted every season or two, a thinner layer of mulch will last long enough and can easily be tilled in at the end of the season.

But mulching—like most things—isn’t 100 percent effective. Weed seeds that land on top of the mulch through the growing season will still have plenty of sunlight to germinate.

Most perennial weed seeds—privet, English ivy and greenbriar, for example—are often the size of a pea or grain of corn. And they are insidious: Unlike small annual weed seeds, darkness under any amount of mulch won’t keep them from germinating, and their larger size means they have the reserves to bulldoze their way up through soil and several inches of mulch. Generally, perennial weeds will have to be pulled by hand or hoed out to get them under control in existing beds.

Starting a new ornamental or edible plant bed to replace part of an existing lawn is well worth the effort, but how you tackle the project depends on the type of grass.

Fescue grasses are clump grasses and have a crown—the point from which new growth develops—above ground at the center of the plant. A thick layer of dense mulch that stays moist, such as 4 inches of wood chips, can cause the crown to rot and the plant to die. This technique works best in the cool part of the year when rain is plentiful because it’s too cool for the grass to grow. I’ve rarely seen this be completely effective in warm weather. In some places, the mulch will be thin enough or the fescue vigorous enough for the crown to grow above the mulch and survive.

Instead of relying just on mulch, till the new bed area first—at any time of year—to put most of the fescue crowns under the soil where they’ll surely rot and die. Afterwards, topping off the new bed with mulch should seal the deal. An added bonus is that these practices will also kill annual weeds, but unfortunately, perennials, such as nut sedge and spreading grasses, won’t die quite so easily.

Mulching and/or tilling a lawn composed of spreading grasses, such as centipedegrass, St. Augustine or Bermuda­grass, simply won’t kill the lawn. It will only aggravate it. In India, they call Bermudagrass “devil grass.” Unlike fescue crowns, the growing point of these grasses is at the end of the leaf stem (also called “stolons”). The stolon can bulldoze its way through soil and almost any thickness of mulch. Like Hercules cutting off the Hydra’s head and watching two grow back, if spreading grasses are cut up by a tiller, sections of root or leaf stem will all start regrowing as new, independent, vigorous plants.

But here’s a great hack: Try sheet mulching. Cover the spreading grass in your new bed area with a layer of salvaged cardboard boxes. Supermarkets and liquor stores are good places to scavenge boxes for free. A double layer of a flattened box will last longer than a single layer. Give each box a generous overlap of about 4 to 6 inches on all sides. Err on the side of too much cardboard and too much overlap. (You can’t stop here, because the spreading grasses would snake their way between the layers of cardboard and into the light.)

Cover the cardboard with a generous layer of 4 to 6 inches of wood chips. Arborists are often happy to give you their wood chips for free, as they would have to pay to dump them otherwise. The wood chips have enough weight to hold the cardboard down where it overlaps, keeping the spreading grasses contained in darkness. Without light, they will all starve to death in a couple months, as sunlight is food for plants.

However, there’s one caveat to the cardboard/woodchip mulching technique: If the cardboard has decomposed and become flimsy by the time spreading grasses become active in late spring, your effort will have been wasted. Spreading grasses are dormant in the cool part of the year: They can’t be starved of light if they aren’t growing, so wait until the spreading grasses are actively growing in spring or summer before covering them with your combo mulch. By fall, the grasses—and any perennial weeds—will be dead and the cardboard will have mostly decomposed, leaving you a fresh, weed-free bed to plant in.

This article originally appeared in the March/April 2016 issue of Hobby Farms.