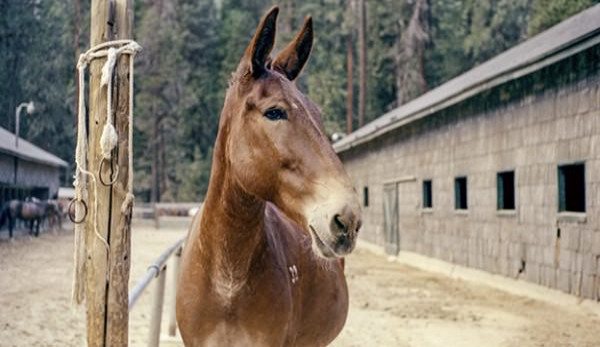 Use: Mules are used for a variety of purposes, including draft work, show and trail riding. Mules have been trained for just about every discipline that horses work in, including gymkhana, dressage and eventing. The Bishop Mule Days Celebration, which takes place every Memorial Day weekend in Bishop, Calif., showcases the many talents of mules.

History: Mules are the infertile result of the crossing of a male donkey and a female horse. (Less numerous, hinnies are the result of a male horse and a female donkey, but are also classified as mules.) Mules have been around since ancient times, and were the preferred animal for transportation among the Greeks and Romans. Mules were first bred in the United States in the 1700s, and were used widely through the 1800s for heavy work. They were popular beasts of burden in the West, and played a significant role in the building of the railroads, establishing town and in mining. Among the most famous mules in U.S. history are the members of the 20-Mule Team, which worked 1883 to 1889 hauling the mineral borax through Death Valley for the Pacific Coast Borax Company. A museum in Boron, Calif., honors the work of these mules. Another famous American mule was a jack named Frances, who starred in a number of films in the 1950s. Frances, who spoke only to his army soldier pal, was known as the Talking Mule. Thousands of people have ridden the famous mules of the Grand Canyon, which are the only equines allowed to take tourists into the great gorge from the South Rim. Mules are still popular for both draft work and riding today. They are considered more surefooted than horses, and are hardier.

Conformation: Mules are a combination of a horse and donkey in appearance. Mules have smaller ears than donkeys, but much longer ears than a horse. The head, hip and legs are similar to a donkey. Mules usually have a sparse forelock, coarse mane and a horse-like tail. Mules can be anywhere in size from less than 36 inches at the withers for miniature mules to 17-hands for draft mules. Mules come in all horse colors and patterns, although they usually have light-colored points.

Special Considerations/Notes: In rare instances, mules have been able to reproduce. One molly in a million is fertile. Male mules should always be castrated.