Fabulous foragers, Muscovies are among the largest duck breeds can be recognized by their red, fleshy carnucles. 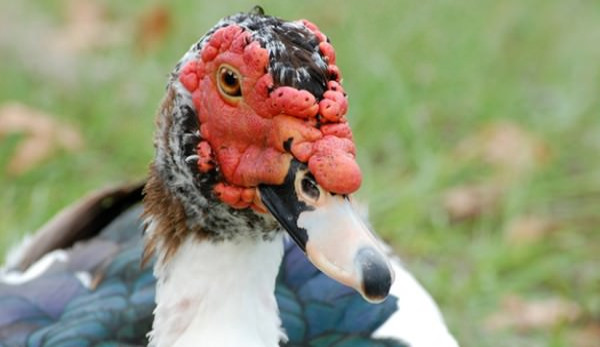 Use: Muscovies love foraging on pasture, where they convert slugs, snails, mosquitoes, weeds, tender grass, berries and other edibles into tasty, lean meat and eggs. Muscovy females only lay around 50 to 100 eggs a year, but they make devoted broody birds that will gladly set their own eggs, as well as those belonging to other waterfowl, and vigorously defend their young from perceived enemies. These birds can make friendly, fascinating pets, too.

History: While all other farmyard ducks developed from the wild Mallard, the domestic Muscovy arose from a perching, hole-nesting tropical duck species, the wild Muscovy. Domesticated by the indigenous peoples of South America, this large breed served as an efficient, pest-eating source of meat and fresh eggs for centuries, and still does today. Some sources speculate the breedâ€™s Russian name came from a shipping company (called the Muscovite Company) that may have ferried these ducks from the New World to Britain during the 1500s.

Conformation: Muscovies are monsters of the duck world, with drakes tipping the scales at around 15 pounds and females weighing about 8 pounds. Some unkind people call these ducks ugly; more enlightened Muscovy enthusiasts describe their appearance as unusual: vivid red skin adorned with fleshy â€ścarunclesâ€ť surrounds the drakeâ€™s eyes and bill, while the femaleâ€™s face has a less warty appearance. Muscovies flaunt a number of different color varieties, including White, Chocolate, Blue and Black.

Special Considerations/Notes: Thanks to their tropical roots, Muscovies tolerate hot weather well (always provide them with water), but they do need shelter during freezing weather. Unlike domestic ducks derived from Mallards, these quackless fowl utter quiet squeaks and hisses, making them a good breed choice if noise is a concern. Use caution when handling these hefty ducks: Muscovies possess powerful wings, clawed feet, and strong, hooked bills â€“ and the feisty disposition to wield them.