With wintry weather taking hold, poultry-keepers often shuffle their birds' living quarters. And for this keeper, the process was a rousing game of Musical Coops! 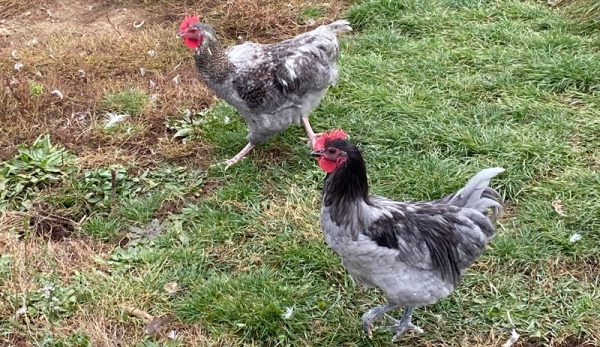 Bitter gusts are howling outside my window, a stark reminder that the weather here in Michigan has finally started its dreary descent into winter.

Yesterday, as flurries painted our deck an icy white, I was thankful that we had actually completed most of our seasonal prep work before the weather went south. Typically, we find ourselves scrambling in the waning daylight, our fingers raw and red from the cold. Not this year, however!

Whatever the reason, our to-dos are pretty much complete, including this fall’s edition of Musical Coops.

Due to rooster deaths, family squabbles and age/gender issues, our birds’ living arrangements had not exactly been what I’d call ideal. During the summer, shuffling the housemates between coops was not a crucial consideration, since they all had plenty of space in which to range and roam.

Hunkered down together for the winter, however, was a totally different deal. One morning last week, I set out to shift our birds around into more suitable housing groups.

Read more: These tips will help you choose the right chicken coop for your birds.

Birds of a Feather

First on the list was uniting our older birds under one roof. For years, we had kept two Orpington flocks in separate coops, most recently headed by Thomas in the main coop and Claude in the New Orpington coop.

Since Ginger Bean’s crew was now significantly larger than Thomas’ faithful three, we exchanged their coops. Thomas and his trio moved to the smaller New Orp coop, while Ginger Bean and his harem got the larger henhouse.

Fast forward to fall: With both Claude and Thomas gone, it was time to merge Thomas’ trio back into the main coop. The problem? Thomas’ trio included the very headstrong Alex Royal Palm.

At age 8, our sole-surviving turkey girl had been unwaveringly loyal to Thomas, worrying me that she would not take kindly to orders from Ginger Bean. I needn’t have worried. Like the Royal Palm that she is, Alex made herself right at home in the main coop … and made it clear that she, not Ginger Bean, ruled the roost.

Ginger Bean for once used his tiny bird brain. He did not challenge the much larger Alex for coop leadership.

Now that the Orps (plus Alex) were ensconced in the main coop, it was time to reunite the Ancona family.

Our Ancona duckling pair, Kiki and Butter Duck, had been continually bullied by their much-larger parents. Injured, stressed and underweight, the duckies needed out. So we moved them into our empty chicken tractor, where they had full access to food and could recuperate in peace.

By mid-August, however, I needed the tractor to introduce Mama Silkie Natalya and her chicks to the outdoors. Since I couldn’t put the duckies back with their elders just yet, they became temporary houseguests of our Ameraucana girls.

Now that they had fully recuperated, Kiki and Butter Duck switched coops to rejoin the duck flock. And, as the largest two ducks of the group, they showed their parents they were no pushovers.

Meanwhile, Natalya and her three babies were facing two separate challenges. First, CJ and Margie, as large-fowl Orpingtons, had spent the summer growing and growing. They left both Natalya and their dwarf Orpington sibling, TJ, well behind size-wise.

Keeping the big boys in our winter brooder together with their tiny mom and sister was not an option.

What to do? The boys were not quite 4 months old yet. The ducks would not tolerate two inquisitive young intruders and Ginger Bean even less so.

The Ameraucana girls, however, had room in their coop, especially now that Kiki and Butter Duck had moved out. In addition, since Claude’s death, the Ameraucana flock had been bereft of a protector.

It was the perfect match.

I brought the boys over, and they were thrilled with all the extra room to explore and new friends to make. The girls were not as excited about the two cockerels, however. They spent the entire first two days running away from the enthusiastic youngsters.

By day four, however, Dolly Ameraucana had taught the boys how to perch and where the best dust-bathing was to be had. CJ and Margie now follow the girls in at night and perch side by side with their new coopmates.

Natalya and TJ, however, would not be joining the boys in the Ameraucana coop.

For starters, we never let our Silkies winter outside. Their lack of hard feathering to protect them from Michigan’s often sub-freezing temperatures would quickly turn them into chicksickles.

TJ, on the other hand, was a fully feathered Orpington. Her issue was her size: Even the small-sized Ameraucanas were giants compared to TJ. She’d be smushed in no time flat.

I therefore decided to move the mom-and-daughter duo back into the winter brooder inside our pole barn. Without CJ and Margie, the brooder seemed positively spacious for the two tiny girls.

I still ferry them out to enjoy the few remaining sunny and relatively warm autumn days, but soon they’ll be hunkering down for the winter within their safe shelter, as will we all.