The muskrat is much smaller than the beaver, but it's a similarly crafty rodent that can disrupt farm waterways. Learn how to prevent that. 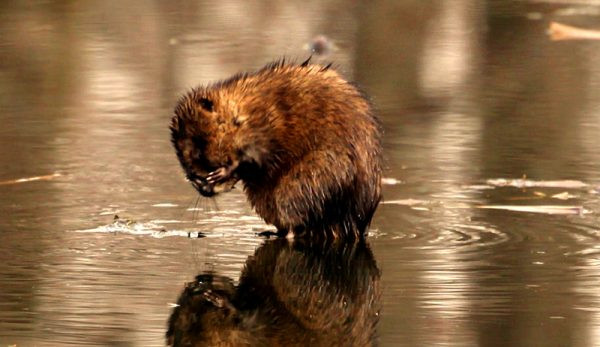 Ondatra zibethicus: It sounds much more noble and respectable than the name muskrat. Letâ€™s start our profile of this unusual rodent with a look at that common nameâ€”muskratâ€”and the truth behind it.

Musk? Yes, but not as musky as a skunk. Muskrat is aptly named for the glands that secrete a musk the animals spread around during mating season. If you were interested in eating muskrat, you probably want to avoid doing so during the mating season (which can be a long season, because muskrats do a lot of mating). Quite a lot of muskrat meals take place, especially on other continents where this North American rodent is an exotic, invasive species, and eating them is one way to control the population.

Rat? Yes, the muskrat is a rodent, but it doesnâ€™t deserve the common prejudice against most rats and mice. Muskrats are cleaner and carry far fewer diseases than the Norway rat, for example. Like most rodents, muskrats are prolific breeders, birthing as many as three litters a year, with as many as six young per litter. The kits can swim on their own at three weeks of age. In the natural scheme of wildlife ecology, an abundance of offspring usually means that many die young. They provide an important source of food for predators, such as birds of prey, raccoons, mink, fox, coyote and even large fish and snapping turtles.

Muskrats are often mistaken for beaver, because they share aquatic habitats and sometimes even live in the same dens. But muskrats are much smaller than beaver, weighing as much as 4 pounds while beavers range from 25 to 90 pounds.

As with beaver, people have loved muskrats for their thick, valuable winter pelts and their tender meatâ€”or they have hated them for rerouting waterways. Not quite the dam-builders, muskrats are blamed for tunneling channels that cause human-made earthen dams to leak. Rarely have muskrats just been admired for the excellent architects that they are. They engineer underwater dwellings while holding their breath for several minutes and chewing woody stems with closed mouths. Thatâ€™s quite a feat!

Muskrats slyly disguise entryways to their burrows that rise from underwater tunnels into warm, dry, safe havens within the pond or stream bank. If the banks arenâ€™t stable enough, they build standing lodges supported by a log or stump base and plaster an arching roof above it with mud and grasses. Muskrats also build feeding platforms, so they can dine on a variety of aquatic plants. Cattails and bulrushes are favorites, along with sedges, reed cane, pickerelweed, waterlily and arrowhead. While they are primarily vegetarian, muskrats will sometimes eat turtles, fish, clams and crayfish when plants arenâ€™t as available.

Former shrimp farmer Susan Harkins in the video below describes what many farmers confront when they inadvertently create the ideal habitat for a wild animal such as a muskrat.

Muskrat life is intricately tied to water life. Their life cycles depend on the rise and fall of ponds throughout all seasons, and they do not hibernate. In the spring, rising water levels destroy their dens. This happens around the same time that denning females are forcing young males out to find their own territories. Natural timing of the water fluctuations might help with the seasonal population shift. Muskrats also need water for survival during winter months. Iced-over ponds shield them from winter predators, and they donâ€™t even need to surface if they find good air pockets under the ice.

A Kentucky Department of Forestry publication emphasizes that muskrats are â€śan integral part of aquatic ecosystemsâ€ť and recommends trapping and removing muskrats as a last resort. Read on for the recommendations on constructing a dam that discourages muskrats from making it their habitat.

The best solution for preventing muskrats from burrowing into dams is to properly construct the dam. Good dam construction should include the following:

Earthen dams can be protected by cutting a narrow trench down the center of the dam and filling it with concrete. The trench should extend three feet below the water and should be filled with concrete to one foot above the normal high-water level. This barrier will prevent muskrats from burrowing completely through the dam and causing a leak.