A genetic mutation in corn leads to discoveries about how to control the western corn rootworm beetle, which threatens U.S. corn crops. 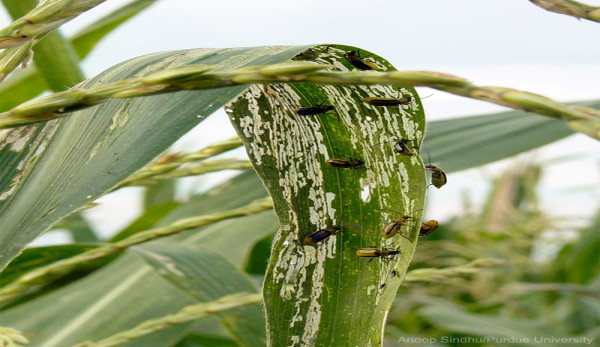 Researchers at Purdue University and the University of Illinois have discovered a corn mutant whose leaves are highly susceptible to attack by western corn rootworm beetles, a pest that feeds primarily on corn silks and pollen.

While western corn rootworm beetles were previously thought to avoid corn leaves based on food-source preference, study of the mutant suggests that normal corn plants have an active defense mechanism that deters the beetles from feeding on their foliage. Identifying this mechanism could lead to new strategies for controlling western corn rootworm, which is the most destructive insect pest of corn in the U.S.

“This opens up a whole new opportunity to understand more about the mechanism of defense in corn to control this beetle,” says Gurmukh Johal, professor of botany and plant pathology at Purdue. Johal and Stephen Moose of Illinois independently discovered the mutant around the same time.

“In identifying the genetic pathway involved in resistance, we can develop better ways of controlling this pest without having to use insecticides,” Johal says.

Western corn rootworm causes more than $1 billion damage a year in yield losses and control costs in the U.S., earning it the nickname “the billion-dollar bug.” The rootworm larvae chew on the roots of corn plants while the adult beetles eat the silks and pollen. Current control measures include crop rotation, transgenic corn plants and insecticides, but a rise in continuous corn systems, increased rootworm resistance to transgenic plants and changes in rootworm behavior have rendered these management strategies less effective.

Because the leaves of the corn mutant are singularly attractive to western corn rootworm beetles, the mutant could be used in a “push-pull” pest-management strategy, luring the beetles to a specific location where they can be controlled, says Christian Krupke, assistant professor of entomology at Purdue and co-author of the study.

“Once you can get them where you want, you can use efficient, cost-effective ways of controlling them, either by directly targeting and eliminating them or by keeping them away from your main crop,” Kurpke says.

In the absence of the beetle, the mutant is virtually indistinguishable from normal corn plants, which could be why it was not discovered earlier, Johal says. Its leaves do not become vulnerable to attack by rootworm beetles until it reaches the vegetative stage, about five to six weeks into the growth process.

On finding the mutant, western corn rootworm beetles scrape away the leaf tissue from the upper epidermis, resulting in a transparent “window pane” appearance. If the beetle infestation is severe, the plants can become completely defoliated, which also can reduce grain yield.

A combination of structural and biochemical changes in the mutant leaves make them particularly vulnerable to attack. The cellular lobes that interlock to provide structural strength are smaller and weaker in the mutant leaves. The leaves also have substantially reduced levels of hydroxycinnmates and lignin, compounds that are responsible for cross-linking microfibers in cell walls.

Further research is being done on the possibility of using the mutant in pest-control strategies and identifying the genetic pathway in normal corn plants that prevents western corn rootworm beetles from consuming their leaves. The genes could be used to make corn plants more pest-resistant, Johal says.

The paper was published online in PLoS ONE.