My 3-Step Approach To Protecting My Garden From Squirrels—Humanely

Squirrels can be a top-notch nuisance in your garden. Keep them away while doing no harm. 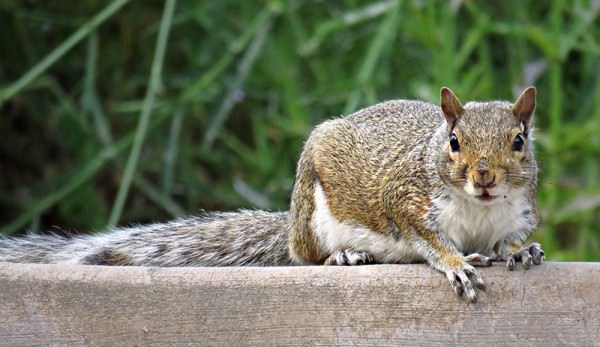 Where I live in northern New England, the growing season is relatively short, generally starting around Memorial Day and ending sometime in early October. Every day you have and every seed you plant is important, so when you find your squash and pumpkin mounds torn up with the shells of the seeds scattered around, it is not a welcome sight. While later in the year my problems will be rabbits, woodchucks and the occasional deer, this early season destruction is the work of squirrels.

My friends ask me why I don’t just shoot the pests. Of course, they ask the same question about the woodchucks. Simply put, I never shoot anything if there’s another way to do it. While I do hunt and fish to help feed my family, I don’t like to kill things needlessly. Another friend recommended using live traps to catch the squirrels and then move them. Yeah, right. There are just too many squirrels to move, so that idea is not practical. I tried many different things, and while each worked for a few days, they quickly lost their effectiveness. Seeing that, I came up with a three-pronged approach, combining all of the things that I found to work on their own.

Squirrels, like most animals, are creatures of habit. With that in mind, I watched my garden at different times of the day and made notes on what I observed. What I noticed was that the squirrels were raiding the garden very early in the morning, so I replanted my squash and pumpkins in the late morning. Then just as the sun was going down, I covered them with black garden cloth, staking it down at both ends. In the morning I pulled back the covering and repeated the process until the first young plants began to break the surface. This process will work until the squirrels figure out that they can wiggle their way under the fabric. When this happens it is time to go to step two.

While still using the black fabric, I placed an owl decoy on the roof edge of my shed. Like the fabric, this worked for a few days—the trick is to move the owl decoy every so often. Squirrels are pretty smart animals, and it doesn’t take them very long to figure out the hoax.

By this point, hopefully Steps 1 and 2 have bought enough time for the seeds to germinate, but if not, you can add an extra layer of protection: predator urine. I know it sounds disgusting, but it works. I use fox urine, as foxes are plentiful in my area and eat squirrels. The urine comes in many different forms and can be picked up wherever hunting/trapping supplies are sold. I use DeadRun by Conquest Scent Sticks because comes in a solid form that looks like a deodorant stick. It applies easily and doesn’t make a mess.

Set four wooden stakes into the ground, one at each corner of the garden. (If you have a large garden, use more stakes.) Apply the fox urine to each stake every few days. While it does stink, especially if the wind blows in the wrong direction, you only have to put up with it for a short amount of time. I highly recommend that you wear gloves while using this product to keep the smell from getting on your skin.

While none of these methods is foolproof, when used collectively, they should buy you the time you need for your seeds to germinate. Once the plants have broken the surface, the squirrels will leave them alone. In most cases, the plants will not be bothered by four-legged pests until they start to produce fruit.

Dana Benner has been writing about all aspects of the outdoors, including farming, for 30 years with his work appearing in both regional and national publications. His farming pieces often reflect the lessons taught by his Native ancestors and all those who came before us.