Got an old chicken coop or unused outbuilding? Consider recycling the materials! Read about how I built a new workshop out of an old poultry house. 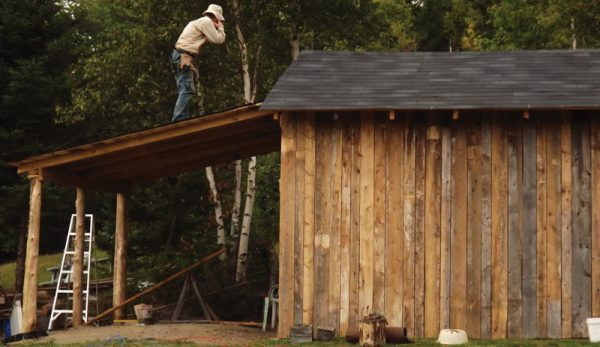 For the third‚ÄØtime‚ÄØthat morning, I glanced up to‚ÄØstudy‚ÄØthe chicken coop. For some reason, it demanded my attention, so I walked down to stand beside the decades-old poultry place. Countless generations of feathered folk had found dry, comfortable accommodations within its walls.

Pulling open the batten door required some serious muscle. I felt like I was opening King Tut‚Äôs inner chambers. Peering into the cobwebs revealed‚ÄØOld Jessie‚Äôs‚ÄØharness and collar, plus a mix of push‚ÄØlawn mowers‚ÄØand bicycles.

It seemed a shame to let the building continue to deteriorate. But realistically, what could I do? ¬Ý

For some time I had wanted another outdoor shed. The chicken coop measured 16-by-16 feet‚Äîmore than adequate for a workbench with plenty of room. Suddenly, endless possibilities swirled before me with the cheerful finished structure increasingly clear in my mind.¬Ý

After a‚ÄØlunch‚ÄØof‚ÄØleftovers and outlining the possibilities, the project‚ÄØmanger‚ÄØon our spread (aka my wife) soon OK‚Äôd the‚ÄØnotion.¬ÝFilled with confidence, I marched down to the former poultry house brimming with ideas.

With the project now clear, I needed to decide how to keep the work flowing smoothly. The roof would come off first, then the walls. Finally, I would pry the frame apart in order to access the overall condition.

I intended to reuse as much lumber as possible. So with wrecking bar in hand, I stepped forward. ¬Ý

The first few boards pulled off were badly end-splintered before I remembered how to use the big 3-foot pry bar‚Äôs nail-puller notch. All nails or spikes that looked usable I tossed into a large pail.¬Ý

Now, a slightly bent nail is not a lost cause, and a whack or two with a ball peen hammer soon returns it to usefulness. Is saving spikes or nails worth it? Plenty of country structures hold solid with second- or third-generation fasteners.¬Ý

What about used shingles? Some rural reclaimers use them, while some never would. But it‚Äôs possible if they can be removed in one solid piece.

If you are so inclined, pry up all six roof nails carefully. Don‚Äôt tackle them with a shovel. ¬Ý

Once I pulled off the roof, some of the boards turned out to be beyond salvage. I also discovered several totally rotten 2-by-6s.

With the sun now shining in, I tackled pulling off the inside and outside walls. Again, there were more rotten boards, but the bulk of the framing 2-by-4s and 2-by-6s were in decent shape.

Plus, I had a big bucket of fasteners ready for a new job. All in all, it wasn‚Äôt as bad as I had feared.¬Ý

With the bare frame dismantled and sorted carefully nearby, it was down to the foundations, which proved to be an unexpected cost. The old turkey tower stood solid on cement blocks grounded in coarse gravel, common in smaller country builds.

But with the blocks beyond salvageable condition, the old chicken coop needed 12 new heavy holders.¬Ý

So with a yard full of lumber in various conditions, I now needed to face the facts: This project required more building supplies than I expected. An expensive trip to town was in order, or so it seemed.

A country wood-salvager just never knows where a few boards might show up, and mine came about like most: unexpectedly.

A neighbor stopped by to ask about the hay crop and noticed my scattered lumber piles. ‚ÄúDid the old coop finally blow down?‚Äù she asked. I explained my repurposing project, and then she inquired if I would have enough lumber? ¬Ý

I replied that it seemed like I was running short. As luck would have it, she had a stack of used lumber in her tractor-shed loft that was in her way. If I wanted it, I could come get it. ¬Ý

Dropping everything, I fired up my tractor, hooked on the wagon and hustled over. A quick survey revealed several dozen boards along with assorted length 2-inch lumber.

Yeehaw! I pushed the whole works out off the loft and loaded down the wagon.¬Ý

My kind neighbor was pleased to have her loft emptied because she expected to fill it with future acquisitions of some sort. Best of all, she wanted a heavy 8-foot cabinet with a solid top gone, too, which I used to make the workbench.

The lumber‚Äôs rough condition fit in perfectly with my reclamation plans. I triple thanked her and set the throttle for home. ¬Ý

Along with the teardown, I also needed to do some landscaping. Nasty scrub bushes had taken over, and the rank grass was loaded with prickly burdocks. I usually leave burdock for the wild turkey who enjoy them and the goats who see everything as European cuisine.

A bit of work with the tractor bucket, a few loads of soddy soil and leveling the surrounding area straightened things up nicely.¬Ý

As the yard around the repurposed chicken coop improved, I also took down a a few problem trees and added them to next winter‚Äôs wood.

If you are repurposing a structure, why not do the same with the landscape? More air circulation along with steady sun ensured this salvage build will stand for another 40-odd seasons‚Äîeven if I do not!

Once the footing was solid, and the floor reframed and planked in with 2-by-6s, it was a steady progress. The wall frames were put up in a single day, then the roof trusses prepared with enough pitch to get the rain running quickly or the snow building up.¬Ý

Using a roof square, I worked out the correct pitch. To be honest, the first couple attempts weren‚Äôt right, but I soon had a template I could copy.

Don‚Äôt rush a roof, and use that 4-foot level often!¬Ý

Once the roof was straight and true, I moved on to double-boarding the four walls with recycled lumber. The totally reclaimed roof got a layer of black, 15-pound tar paper with metal edge flashing to keep drips away from the former poultry house walls, finished in asphalt 3-tab shingles.

Roofing materials, along with the cement blocks, were the only major off-site purchases. ¬Ý

Running with a Run

At this point, things had progressed satisfactorily, but now it was time to get creative. I added a 10-foot run-under roof to one gable end, away for the prevalent winds. Oh, this portion of the project was fun and took longer to get right then the whole roof had!¬Ý

I botched several 2-by-4s, but once it went on, I was pleased. It provided an outdoor work area with cover, and most importantly it pleased the project manager, too. With the door hung and recycled workbench installed, the reclaimed chicken coop was ready for work. ¬Ý

The thought of tearing and tossing this former turkey/chicken deluxe was never even briefly considered, and a‚ÄØreduction of waste into‚ÄØthe‚ÄØenvironment‚ÄØis always‚ÄØworth‚ÄØthe effort. This build was all about recycling, and it turned out well.

So the next time you stand before a weather-worn poultry palace look close. There‚Äôs new life in those old boards just waiting to be released!¬Ý

If you‚Äôre short on old structures for lumber, don‚Äôt worry. Rural‚ÄØareas have all sorts of unused or ignored structures with potential lumber recycling possibilities. Stock barns, feed covers, woodsheds, tool or tractor buildings‚Äîthe possibilities are endless for a wood scrounger.

But there‚Äôs a couple country buildings best avoided: the outhouse and the smokehouse.¬Ý

The first is, well, obvious, and the same goes for any floors from animal sheds. Years of manure make for poor lumber, which is why I removed and tossed the chicken coop floor.¬Ý

But the smoke house, you say, is clean; why not recycle it? Years of tasty smoked meat smells are impossible for a varmint to not notice. Any prowling meat hunter will happily take a poultry dinner as a consolation prize for the promised pork supper. So why put the temptation out there?¬Ý

When asking country folks about their old buildings, be polite and upfront about your plans. Be sure to offer to pay, and if they‚Äôre agreeable, be extra careful to remove only what was agreed on. And try to work as clean as possible, leaving no nails to punch tires.

This article originally appeared in the July/August 2021 issue of¬ÝHobby Farms¬Ýmagazine.

With deep ties to the land, award-winning Canadian writer Cary Rideout lives on a small acreage with his artist wife Lorain.