Liguria, Italy, is a steep place. When the funicular is broken, I know very well how steep it is. 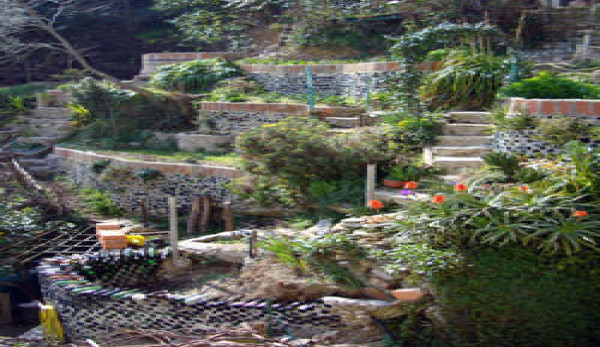 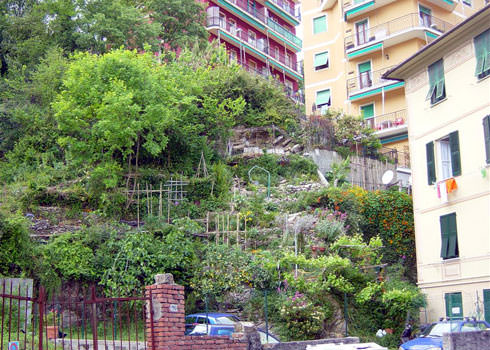 Liguria, Italy, is a steep place. The province is the thin slice of coastal mountains that fall into the Mediterranean watersâ€”never more than 40 miles wideâ€”that wraps around the northwest area known as the Italian Riviera. There are 189 steps from the street up to the apartment I use as my office and art studio. When the funicular is broken, I know very well how steep Liguria is.

Except for the huge river valley of Albenga, all 40 square miles of it, there is not much flat land here in Liguria. The mountains themselves were home to the Liguri and Etruscans in the centuries before Roman times, and these are the small farmers that started making rock walls and terraces and planting olives and grapes. When one walks in the forests on the mountains, old crumbled rock walls hundreds or thousands of years old are evident everywhere. Small farmers have built up pockets of cultivatable soil for thousands of years here, and that work continues. In addition to my own garden work, I also help a local farmer friend repair the rock walls on his land. 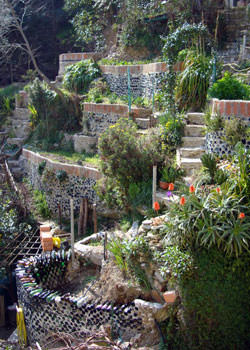 My wife and I live in an apartment on the third floor of an old stable next to a creek. The building was converted to homes a few centuries ago. Next to our building is a sunny cliff that rises far above the four-story, 10-foot ceiling building. The cliff is so steep that rockslides are common in the rainy season. (Rockslides are a common occurrence in all of Liguria, actually.)

When I moved there, the cliff was covered with berry vines and scrub trees, but the strong sunshine inspired me to try to make a garden up there. After the initial clearing, I started making birdsâ€™ nests of branches and weeds in some of the angles where I could make a flat place and fill it with screened dirt. I next piled up rocks to make a few planting areas. In the third year, annoyed with the small size of the planting areas, I started making much larger terrace walls, and I developed the system of using glass bottles as the principal building blocks.

Iâ€™ve been building on the site for five years now, and I must admit, itâ€™s nicely impressive. The whole garden rises more than 70 feet from the street level. Seventy feet is easy to say, but much harder to climb. A whole series of steps and handholds are required so than one can pull oneself up and down the garden. Very Ligurian.

As it turns out, my garden has ended up being a good release for all my castle-building urges. Iâ€™d love to build a new castle, but one could never get a building permit for a new castle in Italy. All the cool, old, rock castles here in Italy make me jealous. Thereâ€™s something about the heroic stone architecture that really attracts me, and Iâ€™d like to work in that medium. Within the structures of my gardenâ€™s terrace walls, Iâ€™ve included a number of bas-relief turrets, battlements and bastions. When viewed from the road, the garden resembles the ruins of a medieval fortress, and the neighbors all joke that when the pirates attack again, we can all take refuge in the neighborhood castle.