A thin strip of coastal mountains that plunge steeply down to the shoreline, Liguria is the land of heroic farming; to make cultivatable land, Ligurian farmers have been piling up rocks to make terraces since about 600 BC when the Ligurians migrated down from the Alps. 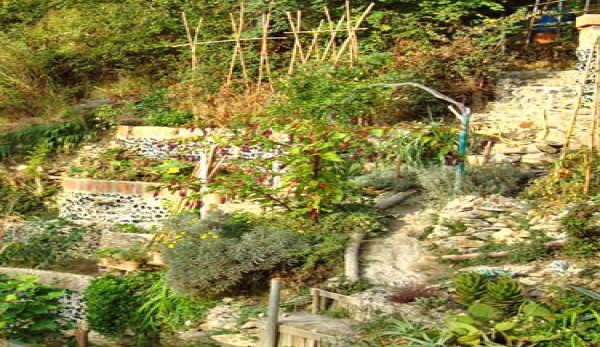 (Editor’s Note: Earlier, Rick introduced us to his hanging gardenÂ and told us a little about his home in Italy. Here’s more about his locale, his gardens–and a final noteÂ that makes us think about recycling and a urban twist on agritourism.)

A thin strip of coastal mountains that plunge steeply down to the shoreline, Liguria is the land of heroic farming; to make cultivatable land, Ligurian farmers have been piling up rocks to make terraces since about 600 BC when the Ligurians migrated down from the Alps.Â

This location was desirable because the mild coastal climate was good for growing plants, and the heights offered protection from the armed raiders that cruised the Mediterranean coastlines stealing women and horses wherever they landed.

I live in Liguria, in the town of Rapallo, which is not far from the famous Cinque Terre, where thousands of rock wall terraces were built on the cliffs that drop hundreds of feet to the ocean below.

Legend says that in the old days some of the harvested grapes were lowered into boats in the ocean, because that was easier than carrying the grapes up the hill.

Today, swarms of tourists descend on Liguria every year, convinced, perhaps justifiably, that all these cliffside terraces offer the most enchanting hiking paths in the world.

So, when I decided to build my own Ligurian garden I chose the sunny cliff next to our home.

The whole thing was covered with wild berry vines and scrub trees when I started, and just cutting a few vertical paths through the spiny berries was a major challenge.

Once I had cleared a bit of the area, I threw long tree trunks across from one stump to another to form the framework, packed the â€śnestsâ€ť with cut brush and weeds, and then filled in the centers with dirt scraped from the few areas that were not all rocks.

At the end of the first year I started making a few concrete steps and installing some posts and handholds to allow climbing up and down.

The plants grew pretty well, but since each planting area was only three or four square feet at the most, I was quite limited in what I could grow.

Decorative Concrete Walls Add Space
One of my clever (and cheap!) ideas was to use bottles instead of bricks to make the walls, using a row of bottles covered by concrete, then another row of bottles and other layer of concrete, and so forth, until the desired height is reached and a brick cap is added to the top.Â

When Iâ€™m making the walls, the wet concrete flows around the necks towards the interior, making it thick and strong, and the bottle ends make a nice flat wall on the front.Â

Once the walls are built, I break a few bottles and fill them with dirt and some seeds, so plants now grow out of the older walls.

The whole effect is like a set of medieval ruins perched on the cliff above Via Betti.

Itâ€™s very Ligurian.Â  Iâ€™m thinking of printing some hiking maps for the tourists.